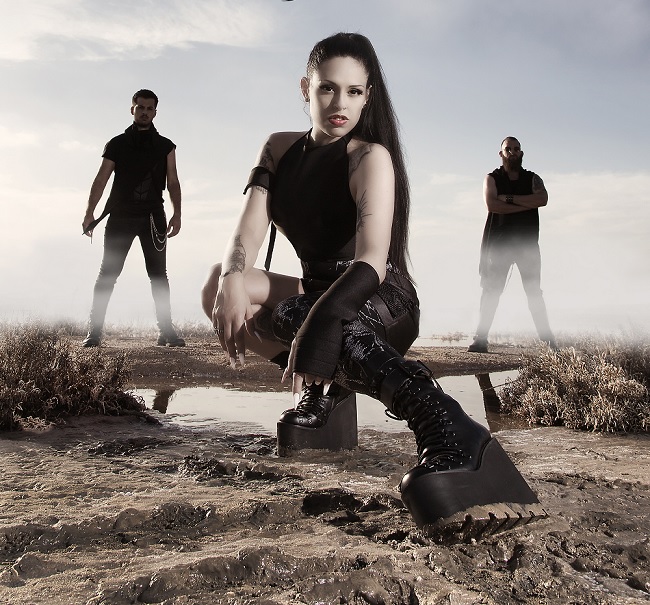 Even if, the Argentinian artist Inéz Vera-Ortiz is quite unknown to the big audiences, she’s a real veteran of the metal panorama. In her ten-year long career, through her many experiences, she was able to solidify her career and learn more about it.

Finally, after putting on hold her band Inner Stream, she’s ready to comeback with her official release “Stain the Sea”. It combines metal, electronics and all the best of her musical influences. Enjoy!

Hi Inez, welcome to Femme Metal Webzine, how are you? And, how are these precarious times treating you?

Thank you very much Miriam. Like everyone else it´s time to rebuilt ourselves and consider what really matters. Our loved ones.

A couple of days ago, Inner Stream début album “Stain the Sea” was released via Frontiers Records SRL. However, what can you tell me about how the band got together? And, up to now how are the official members featured in the line up?

The band got together when I met Alessandro del Vecchio. I had just moved to Spain and I had no band because of that. Actually, me and Guillermo de Medio are the official members.

But due to time management, we were already busy with the writing process back in Argentina that when Frontiers Music SRL‘s proposal come, I had no time to put the band together. However, Andrea Seveso, Nicholas Papapicco and Mita Maccaferri did an excellent job. Indeed, it would be great to continue working with them.

When did your collaboration with Frontiers Records SRL start? And, how was the first approach with the label?

Back in 2018, I published the demo version of on YouTube “Dance with Shades”. Simply as that, Alessandro del Vecchio introduced that song to the company. And, the rest is history.

Your collaboration with Frontiers Records SRL began back in 2020 but how did your musical journey as a singer start?

In truth, I started singing when I was a child and I keep being amazed by it. Professionally speaking, my first metal band was around 1998. Then, I played in many Argentinian bands which include different musical styles. These experiences helped to exploring and knowing better myself.

As I’ve mentioned before, Inner Stream début album “Stain the Sea” is out now. What can you tell me about its general production? And, when did you start to gather the first ideas for it?

Back in 2008, I was singing and writing in a few power metal bands. However, I’ve always thought of myself as an all-round musician. So, thanks to my brother who was a musical production student, my first release was published. Due its successful feedback, I decided to create a band and in 2009 we debuted as a support band for XANDRIA in Argentina.

I played several shows with that formation but at the end Inner Stream went on a long hiatus because I had a busy schedule with other bands too. And also, to lead a band demands time. Despite the hiatus, I kept on writing through the years until when, in 2017, by struck of luck Guillermo came on my path. Indeed, he was the right person to work with. I needed a fresh start for me to start again with the project and collect all the songs for the album.

Out of “Stain the Sea”, 4 singles were released: “Massive Drain”, “Dance with Shades”, “Fair War” and “Last Drink”. What can you specifically share about these songs and lyrics?

Mostly, these 4 singles depict different introspective moments that I experienced. However, “Massive Drain” deserves a special mention because it was the last song I created for “Stain the Sea”. Most of all, it happened during lockdown. And, this situation triggered me reminder about pain. It carries the awakening is a birth and a relief. And, intuition is a compass to go through it.

The question may sound a bit overrated, but which meaning does this release hold for you?

It means everything to me and I love that the debut is a compilation of songs that represent my musical journey through all these years. Also, this album is so special because it is the first time in my life I can express with no limits myself through music.

Despite the pandemic, what’s it in the pipeline? Which is the thing that you are more looking forward to? And, which are your next plans?

I am looking forward to play live shows and make more music.

So, Inés, we’re almost at the end. Please be free to say hi to your fans and listeners. Thank you so much for this interview.

I wanna say thank you to all the fans, the support, the streams. I am very happy to have the chance to share a piece of my soul with all of you. Thank you !!