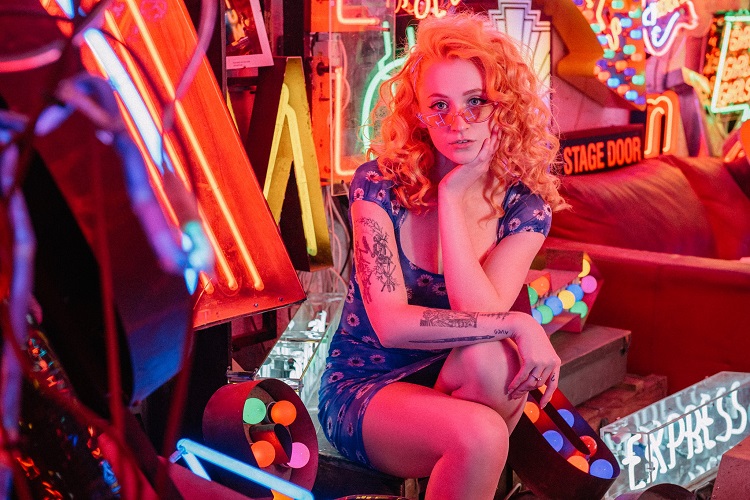 JANET DEVLIN – An Interview with the artist

North Irish folk/pop/rock singer-songwriter Janet Devlin is back with her new EP “It’s Not That Deep”. After her monumental second LP “Confessions”, that was released together a companion book back in 2020. Now, the artist with her new EP free of any fixed concept, is able to keep musically express herself. Discover more with us!

Hi Janet, welcome to Femme Metal Webzine. How are you? And, how these strange times are treating you?

Thank you so much. It’s nothing too bad because I’m touring. It feels much closer to the others.

The much-anticipated EP “It’s Not that Deep” follows 2020’s “Confessions”. How much impacted the pandemic’s consequences?

It was weird experience to produce an album during the pandemic. I couldn’t play any live show and what I had previously planned for the launching my full-length were cancelled. Basically, I did my promo and my interview in my bedroom too. So, I’ve essentially stayed in one room for all my lockdown.

Out of “It’s Not That Deep”, as a first appetizer it was released the single “Place Called Home”. What can you say about this song?

First, that song never fit in any of the album that so far, I’ve released. But I always loved it. So, when I came up with the concept of “It’s Not That Deep”, I decided to include it.  Since I had the chance to musically be free in this EP, it was a good reason to feature it.

Concerning the song, the idea behind it is about to find your home, your place in the world. It can be quite a bleak feeling like when for example, you leave your parent’s home and when you return, you always feeling like a guest. It’s not ideal because you’re always searching for your home without finding it.

Once again, I felt quite bleak, and I wanted to chance that. Indeed, “Place Called Home” turned out to be quite uplifting by removing the melancholy from the track itself. And, then making it more positive.

You have just mentioned that this song was ready years ago and it never completely fit my other releases. Why, do you think it was the right time to unveil this song?

It’s just because of the EP. This one is all about doing whatever I want just because I wanted to. That’s literally it. [Laughs]

The single in aptly titled “Place Called Home”. But did you find the right place to call home? And what represents for you the world “home”?

Well, it’s both an external and internal feeling of home. Whenever, you come to that place, you are supposed to call it home yourself. It’s a physical feeling because it’s also related with your skin. Like pulling yourself. On the other way, it’s indeed external because it related with to the location. To where your home is.

The single was co-written by and together Johnny Wright. In which way his collaboration/cooperation helped you to expressed what you had in mind?

I really love cowriting with someone else because it feels like have access to their brains for a little. However, I tend to compose the lyrics and melody, and, in this case, Johnny Wright took care of the core progression. It’s not just only having access to their brains; it’s also trying to capture what you wouldn’t have written if you hadn’t the choice to collaborate.

Is this EP to be considered as a sort of continuation from your previous full-length “My Confession”?

No, it’s a very different world. “My Confessions” was deep and different. Everything had a purpose. Indeed, behind that release it lies a proper concept which involves a place, time and somewhat of a chronological order. So, that makes it quite thought-out. Whereas with this single and EP, it was more of freeform process. I just did it because I wanted to. And, because it feels like as this release is the opposite of the last full-length.

What’s in the pipeline, Janet? And let’s stay optimistic…

[Laughs] Basically, I’m already busy to write my next record which will be a country one. I’ve just been in a lot of writing sessions with which I’ll try to put my thoughts out there. Then, I’ll finish my tour, maybe I’ll play some more before the end of this year. However, my focus is to compose new songs for the next album.

So, Janet, thank you so much for this interview. I hope you did enjoy the interview. And this is your space for your own words.

Essentially, my last word to the readers will be to go ahead and check out my back catalogue if you want to know more about my music.