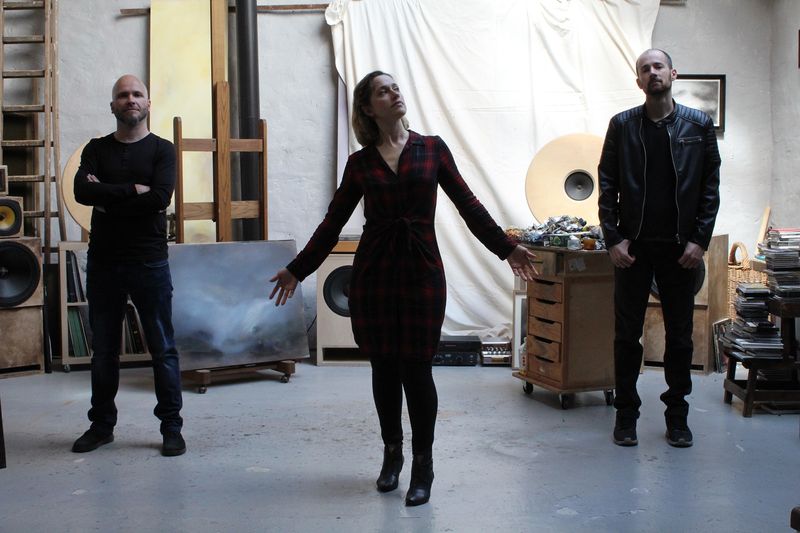 Lately the underground metal scene is bringing to life some band nobody knew about before and, at the same time, it is offering some great interesting spark in order to get more knowledge. From this vast and incredibile sphere that is constantly growing up, the French act Jirfiya finds its own spot. With only an EP in its own discography, ‘Wait For Dawn’, the progressive metal group got some recognition little by little, offering the audience a great calling card. Femme Metal also have been fascinated by the French trio and we wanted to dedicate the band a spot in order to bring this band to your attention, so here we go with a great in-depth interview with the singer Ingrid Denis.

Hi Ingrid and welcome to Femme Metal webzine. It’s a great pleasure hosting this chat with you today!

Ingrid: Hi Arianna, my pleasure too! Please to meet your webzine and community of followers!

Today I’d like to talk about Jirfiya, would you mind introducing the band to our readers and followers?

Ingrid: We are a French metal band, some say we play Progressive Metal. We live near from Paris, and met each others last year. Jérôme and Pascal had a Metal band called BORN FROM LIE, and they released 3 albums. Jérôme is the composer, singer and guitarist ; Pascal plays bass guitar and composes too; and for me, I sing in another Progressive rock band, OSCIL, and previously I had also some collaborations with different projects.

The band’s name is pretty curious. Where did you draw inspiration for the name? Does it have any special meaning?

Ingrid: This is the name of fragments of a Martian Meteorite fallen in Sahara Desert. We adapted the name to be easier to pronounce it in our West countries. And we like it because it sounds feminine and rugged. When we link it with the visual cover of our EP, it could be the name of a warrior goddess. Goddess of Justice and Compassion.

“Wait For Dawn” is your first EP. What kind of reception did you get so far from the people who managed to listen to your music?

Ingrid: Well, we are very happy and proud because we have many nice reviews and comments at this time. Some of them point the quality of composing, various and complex. They mentioned the high level of technic, of playing and recording. And of course, many people like vocals, the duet between the rough mood and the sweeter lines.

Thinking of progressive metal, people tend to think that a band might sound like Dream Theater or something similar. Listening to your EP, personally I’ve recalled a lot of other music influences. Maybe what I’m going to tell you may sound trivial or silly but I’ve perceived some Siouxie and The Banshee in your vocals, even if it sounds more rock/metal or also some bluesy vibe like the one in the finale of “To Be Saved” (that I’ve loved at first sight) or again some little Lacuna Coil melody in some vocal passage of “A Part Of Light” or “Waiting For Your Fall”. What have been the bands that, somehow, has forged your music background?

Ingrid: Thank you very much! You’re not silly at all, my personal inspirations are more Indie Rock, indeed, even if I’ve always been attracted by Metal, you know, like when you’re attracted by bad guys ;)! I’m a huge fan of female singers like PJ Harvey, Björk, Tori Amos, Fiona Apple, Sinead O’Connor, and I sang many covers of this artists before. My life has changed when I discovered Jeff Buckley. It opened me to rock, jazz, heavy rock. His voice, powerful vibes and so emotional, is still inspiring.
Some reviews compared us to Lacuna Coil. It’s not a direct influence, but we really like their great melodic sense.
Jérôme is still fond of Megadeth since youth, whereas Pascal listened Iron Maiden and Trash Metal!

Each of you comes from other different bands. How did you approach to this first EP, given your previous music experiences?

Ingrid: Well, I saw a post on social medias last year, that Born From Lie was searching for singers to collaborate, because Jérôme didn’t want to sing anymore to focus on guitar. So, I send a message, and he was thrilled to test with me. We three are fans of The Gathering and Anneke Van Giersbergen. Then Jérôme offered to create a new project with Pascal and me. We didn’t know how it could sounds like, between their dark universe and my voice.
We recorded our parts at home in pre-production, and when we finally recorded in the real studio, we were like ‘Wow! Is it us, really? Good band!”

If you were to introduce Jirfiya to an audience who is not familiar with you, how would you introduce the band? Which songs would you suggest to invite people to give a listen to your music?

Ingrid: We have 5 tracks on the EP. We choose The Report Card as our first single because of lyrics, notably. We are like a “militant band” you know. We have some social themes: Refugees, Ecology… And we treat that with anger and sensitivity.

A lot of metal bands came from France over the years, but currently how is metal seen in your country?

Ingrid: Many French metalheads would say that France is definitely not a “Metal” or “Rock Country”. Some French bands are famous in other countries, but when Gojira is nominated for Grammys, almost none french mainstream media talks about this honor. Oh, yes, we have Hellfest! Once a year, you can see medias care about Metal, often with ironic topics and coverages. BUT we have a prolific and talented scene, even if it’s difficult to have a professional career. Many indie and specialized medias support Metal bands, and social medias are very important currently. And audience is exigent.

Like a lot of any other young band, it’s quite difficult to be successful in promoting your own music through social medias or music platforms like Bandcamp, Spotify and so on. What’s your personal approach in promoting music with people?

Ingrid: Yes, we are totally independent, and so, it’s part of the job to contact webzines and promote ourselves. We sent our EP to many medias, and we communicate reviews on our social pages. Fortunately, they’re all good until now! We know we live in a world of images, but we’re not good to send pictures each day on Insta, sorry… These past few weeks, we have released 2 videos on our Youtube Channel, we hope touching more and more audience with that. But yes, it’s hard to get light!

You’re not tied to any record company at the moment, so we could say that you’re completely independent. What’s the toughest part in the management and promotional part? Have you ever had any hitch related to Jirfiya’s promotion or in trying to introduce the band at the best booking some live show to some venue?

Ingrid: We’d like to sign with good label or touring company, because, yes, again, it’s hard to do all ourselves! Contacting both medias and music programmers, almost each week, stay in touch, and found time to reply, in addition to our first job. That’s a big personal investment.
But we have already some good news to come!

How hard is indeed to manage in allowing people to get in touch and get to know the band, both online and outside the Internet? I don’t know how the situation is in France, but for example in Italy a lot of bands struggle to book some show, because promoters often allow cover bands and more famous groups to play onstage, because they know that these bands can be a great investment!

Ingrid: Same thing in France! We know some places which book only Tribute Bands. The Underground scene is fragile and always in danger. Not only because of lazy promoters… You know, in Paris, there are a only few places, or indie bars where we can play loud. Neighbourhood complain to authorities, so bars are closed by. But, many bands are gathering themselves to co-headlining on stages, to create local festivals, so audience is larger.

Currently you’re promoting this EP at your best. The following question may sound a bit trivial but amongst your future plans, there’s the intention of releasing a full length album as well?

Ingrid: We hope for that! Next year certainly. As you understood, we all have another job, and families, so it takes more time, but it’s our goal. At a minimum, we’d do another EP. Jérôme has some ideas, and is already composing!

What will be the future plan that will keep you busy from now on? I’m a nice naïve person and I always hope to see the bands I get in touch with performing in Italy. I know it could be quite difficult at the moment, but I always hope it may happen one day!

Ingrid: We’re looking for that too! A few gigs in France are already planned, and we really want to try to perform in Europe. We just found our regular drummer, we’ll work hard! See you in Italy 🙂

Ingrid, I wanna thank you for your time and for giving us this spot! As our tradition wants, I invite the interviewee to share the final words; meantime, I wish you and the band all the best, hoping to see you performing on big stages one day or another!

Ingrid: Thank you very much for your support to a lot of bands who deserve it, all around the world. See you on stage!