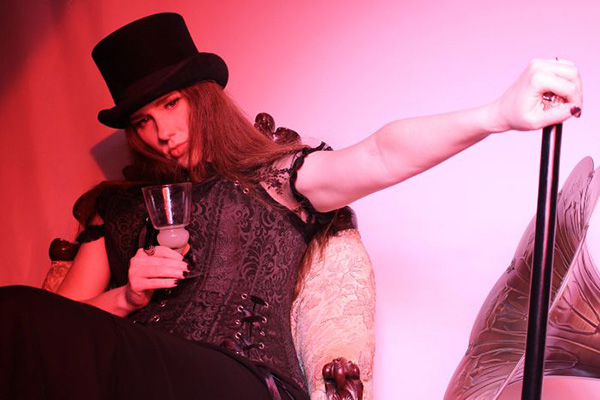 It’s difficult indeed to put Joan’s music within a very specific label, because the artist embraces both gothic metal but also symphonic rock as well. On the upcoming release of her new album, “Dies Irae”, we talked with this talented girl about her world and her creative music.

Hi Joan e welcome to Femme Metal for this very first interview. It’s a pleasure hosting this chat with you today. How are you doing?

Joan: Thanks for having me! I’m doing good. It’s busy but good!

So let’s break the ice and let’s talk about you, of course. Would you mind telling us who’s actually Joan Avant for those people who are not familiar with you and your music?

Joan: Well I’m a one woman band. Joan Avant is my real name, so maybe not so creative in “Band names.” 🙂 My genre is gothic symphonic rock. I toss in “victorian” gothic as well because I write a lot of historical and fantasy themes based off of that period.

Joan: There hasn’t been much of a change in the process of making the album. However I think just the experience of doing more of everything; songwriting, recording, performing, and mixing etc has helped me better express my vision and style. I also upgraded some gear and expanded upon my sound palette.

I have to say that as soon as I’ve listened to the record, I didn’t know what to expect, even if I was extremely curious. The music you offer is, indeed, very peculiar and it’s hardly embraceable in any “label”, because indeed it embraces different types of music. Who has influenced your music background and your style?

Joan: My classical influences are Philip Glass and Mozart. I also grew up listening to classic rock, so I enjoyed acts such as Joan Jett and Led Zepplin. I have a love for good pop and dance music and metal.

How do you create a song? Do you start from the music or on the lyrics?

Joan: The music. Almost always. Occasionally a fragment of a lyric may pop out of thin air, but then I have to work it into the music.

You’re a multi-instrumentalist, which music instruments do you actually play?

Let’s talk about the new album and the album title, which recalls the famous Latin sequence attributed to either Thomas of Celano of the Franciscans. Why did you choose this title for the album? Is there any hidden meaning behind it?

Joan: Finally! No one ever asks this question and I’m surprised they haven’t! The “Dies Irae” dates way back. I’m more nodding to its use in Mozart’s Requiem mass. I wanted to try my hand at writing my own rock version.

The latin means “Day of wrath”. The song focuses on Hell, guilt and judgement. With all of the evil in the world I find that we even have a glimpse of hell here on earth. I know pretty light stuff 😉

But hopefully that will draw the circle to a close of why my album design is so fiery.

From this new release you’ve published the single “Better Broken”. How has it been welcomed by the people? What kind of feedback did you get??

Joan: It seems its a song that is relatable to a lot of people. Someone said something along the lines of “your songs touch broken souls.” In my case, I hope they do. I’ve got the melancholic spirit so I write music for kindred spirits.

I’d love to ask the following question in a very funny and curious way: let’s suppose that you have to describe your music to someone who has no clue of who you are, you have to mention just a couple of songs from this new album in order to arouse people’s curiosity. How would you describe your own sound and which songs would you choose?

Joan: Hard rock meets the Victorian age. Check out “Mr. Chandler” and “End of the Opera”.

In your opinion, why people shall give you a listen?

Joan: It’ll be a scream. If you like eerie beautiful things… this is for you.

How hard is for a new artist or a newborn band to get some recognition in her/his own country and also abroad? How much work is needed to get some little rewarded recognition?

Joan: It’s hard because everyone has a band and everyone is screaming to get heard. I’m taking the slow but steady approach. I keep up with my social media and talk to listeners daily. The short answer is that it takes daily work to share and engage in this musical world I’m trying to create.

The album will be out on Red Masque Records, how important is for a new artist nowadays to have the support from a label?

Joan: Well to be clear, “Red Masque” is my label. Outside labels can be of use to some artists if that’s the route they want to go. I just prefer to be in the driver’s seat when it come to my music and it’s promotion.

Which will be your future plans at the moment? Do you have any particular ambition?

Joan: I’m fuling up on ideas and concepts for my next album. I know… no rest for the wicked 🙂

This was my latest question, Joan. Thanks for having me today with you. As our tradition wants, I call the interviewee to share the final words with us, so I call you to speak!

Joan: Thank you! “Dies Irae” comes out December 10th. Check it out, you’ll be the coolest of all of your friends!