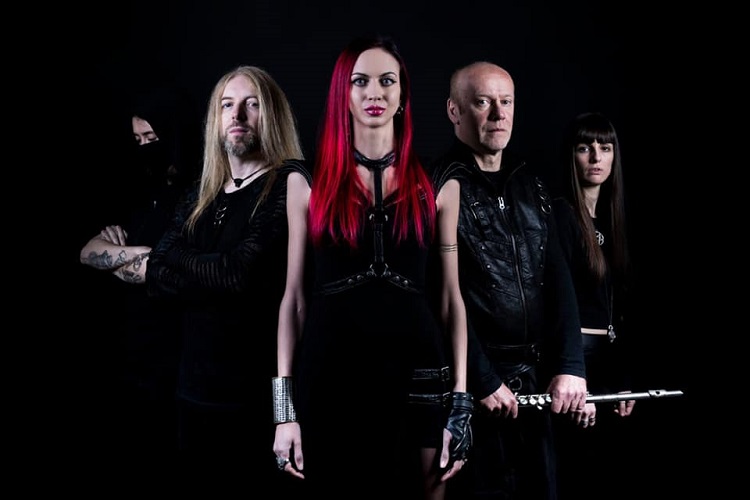 Space psychedelic rockers La Morte Viene dallo Spazio are the hottest name of the moment. Their second LP “Trivial Visions”, released via Svart Records, promise to be a real sonic trip in another undefined dimension. In order to know more about it, multi-instrumentalist and singer Melissa Crema talks to Femme Metal Webzine. Enjoy!

Hi Melissa, welcome to Femme Metal Webzine. How are you? And how are these precarious times treating you?

Hi Miriam, thank you so much and I’m happy to be featured here because I really like your interviews on the website.

Also, the importance that you give to women in the metal panorama is still needed. So, thank you again for this opportunity.

Well, despite this pandemic, I’m fine but still it’s quite a difficult period for everyone in the music business. Indeed, it passed a long time from the last gig we played which I find it quite frustrating.

First of all, Melissa, for all our readers who aren’t familiar with La Morte Viene dallo Spazio, would you like to tell us how did the band come together?

We started as an open collective without a fixed line-up, even on stage. We didn’t rehearse and indeed, our beginning was like a sort of jam band interested in improvising. Which is the total opposite of how we are right now. The guitarist and my husband Bazu found the band. I’ve joined immediately after as a keyboardist and synthesizers.

With the release of our début album in May 2018 “Sky over Giza”, we had an embryonal line-up that recorded a LP quite a strange and free from any musical structure. After this release, we started to have a fixed line-up which allowed us to find a touring agency and play around Europe. Especially in Germany and UK. Instead, the name of our band in Italian means “The Death Comes from the Space” which originally was the title of a B-movie from the 50s.

The second album called “Trial Visions” was released on March 26th via Svart Records. What can you share about its general production?

We have recorded and mastered the album in a studio near Milan, the Trai studios. As per our tradition, most of our songs are instrumental except for 3 of them, which features lyrics. Personally speaking, I find this album quite dark and introspective because for the 3 songs deal with our lives’ experiences.

We aren’t trivial people and we have seriously committed to offer the best and share our deepest feelings with our listeners. But each of our listener can have a different emotional reaction to our music, that’s the beauty of it.

Previously you’ve mentioned where the band’s name originates from. How does it represent the real essence of the band?

Indeed, it represent our interest in science fictions, old B-movies, and Japanese strips. But, you know, daily life too offers a lot of room for thoughts and for, questioning ourselves of our existence.

“Trivial Visions” is released by Finland’s premium label Svart Records. When did this partnership start and how is it treating you so far?

The first time that we reached out to Tomi, Svart Record’s manager, was in August 2020. He was about to leave for his holidays but during our first chat, he expressed interest about our project and he wanted to listen more. Then, in September, he absolutely showed appreciation to continue to work together and we are so happy to be part of Svart Record’s roster. So far, we are quite satisfied by their professionalism and their promo and we’re receiving a lot of feedback for “Trivial Visions”.

As mentioned before, La Morte Viene dallo Spazio’s debut “Sky Over Giza” was released in 2018. In that regard, the press release stated that it’s “a synth-laden soundscape full of ancient mysticism and alien apparitions” while “Trivial Visions” is a “wholly new experience”. In which way, these two releases differ between each other?

You know, if with “Sky over Giza” was about mainly improvisation, this time we have worked hard on the songs by building a structure and achieving the sound we wanted. Even if, “Sky over Giza” is a concept album about the indigenous tribe of the Dogon who they believe in the existence of the aliens, our debut has an inconsistent musical structure. The music in that album is the full expression of the musicians’ feelings. Though, one of the things our debut and our second one share is an interchangeable space rock flavor that stands out in all our releases.

“Cursed Invader” is the first single from “Trivial Visions”. What insights can you share about it?

Well, “Cursed Invader” was the first song that we have composed for this LP. And it’s one of the songs that has in common a lot with “Sky over Giza” while the other songs have a much heavier and have a metal-influenced sound. Indeed, the visual video like the one that we have released, is suited for that song

By the way, I love the artwork with these steps that lead to an entrance to a parallel universe. Of course, this is just my interpretation, but how does it reflect on the songs of the album?

Our friend, who’s a designer, SOLOMACELLO is the author of the artwork. Additionally, we have commissioned to him also posters, merchandise artwork and t-shirts. The fact that he’s quite familiar with our musical world and to the space rock scene makes of him a trusted collaborator. And an artist capable to express what we had in our minds.

Melissa, what does the future hold for La Morte Viene dallo Spazio?

I have absolutely no idea. It’s quite a strange situation and we don’t even know if we’ll able to promote this release. However, what we hope is to schedule a tour soon and tour abroad. Before the pandemic, we used to tour a lot in Europe and right now, we don’t have any expectations. You know, we’ll just wait and see.

Sadly, we are at the end of our interview. Please feel free to say hi to your fans and our readers. Thank you so much.

Thank you so much for your time, Miriam. It was my pleasure talking with you. To all our fans, I hope to see you soon on tour and take care.