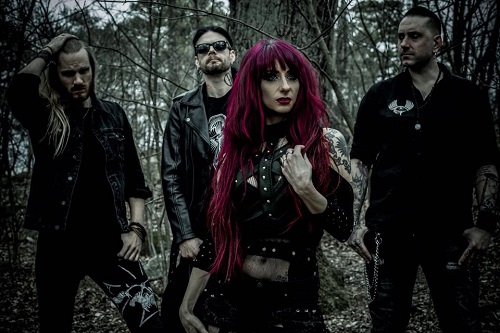 Liv Jägrell is no stranger to the music business. Before founding the heavy metal band Liv Sin, the Swedish singer successfully fronted her previous band Sister Sin. Of course, this is not our first interview with her but in a way, it marks our first interview for Liv Sin. On this occasion, we have enquired Liv about their second album “Burning Sermons”. What this does it mean? Well, discover it with us!

Hi Liv, welcome back to Femme Metal Webzine. How are you and how life is treating you nowadays with this new release?

I’m fine, thank you. I’ve worked today, so I’m a bit tired but it is all good. I’m looking forward to the feedback and to release of this new full-length. I’m really excited about it.

Liv Sin‘s second album “Burning Sermons” was released on the 6th September 2019, what you can share about its general production? When did you start to collect the first ideas for it?

Actually, I would say that we have started early last year. I remember that the process began in March and then we continued a bit before the summer break. Of course, we had a lot of time but in the end when we did the recordings and we get really stressed about it. However, as I said before, we were a bit stressed about it and our producer Emil Nödtveidt smoothed a lot the process because it’s really easy to work with him. Instead of entering the recording studio for a longer time such as 3 or 4 weeks, this time we chose to record this album little by little and for me, it turned out to be a wise choice because I had the right amount of time to learn the songs, to try and come up with other ideas.

You have just mentioned your collaboration with your producer Emil Nödtveidt, why did you opt to collaborate with him?

I had known him for a couple of years since my former band and we played together in a few festivals together with his band Deathstars. Also, we live in the same city, Stockholm. I was supposed to talk with him already for the previous album but he didn’t have time due to his schedule and at the time, we looked out for someone else. So, what really happened this time is that he contacted me while we were searching for a producer and he wasn’t even aware of it. He has simply sent a message like “Hey, are you still interested in doing something?” and it just happened at the right moment, it felt like it was a sign from the universe. Obviously, we met and we started to talk about a bit of the sound we wanted to achieve, we underlined the fact that we really like how the debut album sounds but it was too much classic old school heavy metal. Naturally, by bringing him on board, we have already acknowledged the fact he would create some innovative arrangements by adding, for example, the keyboards and in general, we were looking to experiment with a different type of sound.

As I mentioned before “Burning Sermons” is your new album, despite all which improvements/differences can you denote from the debut “Follow Me”?

First of all, what makes different “Burning Sermons” from “Follow Me” is for sure the keyboards and some musical dynamics. We have worked much more in-depth with those dynamics and personally speaking, I feel that I’ve improved as a melody writer. Of course, I always work with our guitar player Patrick Ankermark but I have to thank our producer Emil if I have discovered some other ways of how to approach the melody lines while composing. Also, “Burning Ceremony” marks an improvement in the melody.

Please if you feel like not replying to this question, just feel free to skip it. In a way, this interview is special because it’s our first interview under the moniker Liv Sin even though we have interviewed you back in the day with Sister Sin. Once again, if you feel that the question is disrespectful, please don’t reply, however, do you consider Liv Sin as a sort of musical continuation from were Sister Sin left?

It’s a bit of a hard question because I don’t think about Liv Sin in that way and now, I will explain to you the reason why of this: even though we were playing metal, Sister Sin had basically more a rock’n’roll attitude. Naturally, I played together with Sister Sin for 13 years and all those elements are still part of me and it’s quite normal that I’ll bring with me a little bit of Sister Sin in Liv Sin. Mainly, the difference lies in the musical stance, I always liked to play Sister Sin‘s material on the other way around I constantly tried to reinforce the heavier side of it. Probably, I wasn’t able to musically stand my ground with Sister Sin but now that I’m in charge, it will be easier. Sister Sin‘s rock n roll attitude represented for me a limit and now, with Liv Sin, I can lead the band all the artistic direction we like: more thrashy or heavier.

Taking inspiration from the title album, I was wondering to learn which sermons do you aim to burn? To what you specifically refer to when you use the word ‘sermons’?

From the beginning we just wanted to find the title, which our bass player Patrick come up with, that was cool. But when we started to reflect on it, I personally perceive it as a way to burning the ideas that I don’t agree upon it. In this case, all my lyrics are political and straightforward, they are expressing my view about the present worldwide situation, so “Burning Sermons” has this meaning for me.

The promotion of this album started already in April with the release of “Slave to the Machine” and then, it followed with the other two singles which are “Blood Moon Fever” and “Chapter of the Witch”. So, would you mind giving us more insights about these particular songs?

Yeah, absolutely. Actually, “Slave to the Machine” was the last song that we wrote and it was chosen as the first single. The funny thing about this song is that it wasn’t supposed to be on the record because we already had our definitive track-list but I wanted one more song and I kinda forced my guitar player to change its original musical idea. The reason behind this choice is that I like the outcome so, its heavy grooving riff. Instead, if we refer to “Slave to the Machine”‘s lyrics, I try to express how we have lost control of our devices that on a daily basis we use. Technology is kinda taking control of us and unfortunately, it’s a way to keep the power over the people because we dedicate a lot of time to our phones between social media and watching things and bottom line is how I think it. Then we have “Blood Moon Fever” which is one of my favorites. We already knew that we wanted to release it as a single because of addictive melodies that literally hook you up. I was in Croatia last year in July when I wrote the lyrics and I was inspired by this blood moon in the sky. Me and my boyfriend started reliving this blood moon and it was interesting to discover the different meanings that it holds, of course, not only in the occult, but also what in our everyday life which power it has. Besides the cool title, the lyrics are about starting a new beginning by leaving the old stuff behind, even if it’s unresolved, just as a way to let go and this fever relates to the feeling of following a new path. And here we come to the third and last single “Chapter of the Witch” which was the first lyrics that I have composed. I was completely hooked up by this personal idea that we need more female forces in the world to gain more power. We can even try to temporarily possess that power and then we go back to it. Despite all, we would have learned a new lesson and that it would be bring more balance. We really need that kind of feminine power and this song is also a sort of call to action for women out there to stand up, got together and save our world. Maybe we’ll be able to counterbalance the male hegemony.

What are the next band plans in terms of touring? Are you planning an European tour?

Just up to this moment, we have only some dates in Spain booked but hopefully, we’ll try to spread the Liv Sin‘s verb soon in Europe too. Naturally, our goal to play wherever is possible and wherever there is a demand for our music.

So, Liv, I really thank you for all your time. Well, now it’s your space to be to say hi to our readers and your fans, say whatever you like.

I hope and I wish that people will like and appreciate the record and also that they’ll give it a shot. It’s a really good album with a lot of headbanging material which is important.