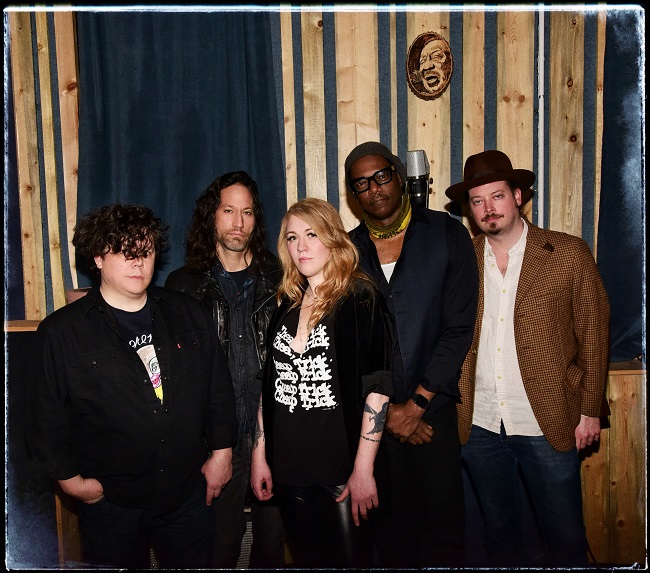 LIZZIE & THE MAKERS – An Interview with Lizzie Edwards

Despite the pandemic put a (temporary) hold to their new album “Dear Onda Wahl”, the quintet Lizzie & the Makers has excitedly waited the right opportunity for releasing this amazing full-length.

Infusing elements of art-rock, dream-pop, and a celestial atmosphere, “Dear Onda Wahl” sees the participations of the producers The Cure‘s Reeves Gabriels and David Bowie’s Mario McNulty. Discover more in our interview with the leader, Lizzie Edwards. Enjoy!

So, Lizzie, welcome to Femme Metal Webzine. How are you? And, how these precarious days are treating you?

I’m doing fine. During these weird times, the best I can. I’m trying to stay afloat by playing live music as I can. And looking forward when this will be all over.

Even though, you’re a professional artist and well-involved in the music business, I was curious to learn how Lizzie and the Makers got together?

At the time, I was working in a musical venue in Williamsburg called Kitty’s Candy Store and one time, I’ve managed to organize a small one-day booze festival. Indeed, I was supposed to play with a band, but it folded. So, I had to put together quite fast a new one for that night.

It was everything quite random. And our current lead guitarist Greg McMullan approached me by asking if he can be part of my band. In that moment, the funny thing was he still didn’t hear me singing yet. We just clicked and we kept on going. Everything started accidentally and since then, we keep on going, writing together and never look back.

After a long wait, your second album “Dear Onda Wahl” is about to be released. However, what about its general production? When did you start to gather the first ideas for this release? Lastly, how the pandemic impacted on the release?

I guess, we started to write material for this album in 2018. In that period, I was going through a break-up. Consequently, I had a lot of emotional turmoil to draw from and for this reason, the songs came up quickly. Greg and I traded ideas back and forth. Though, once we had a full album, we have accordingly decided to bring someone from outside. Since we have been self-produced before, we realized that we needed another prospective on our songs.

Then, Greg reached out to his friend, The Cure‘s Reeves Gabriels who followed suite his friend, Davis Bowie‘s producer, Mario McNulty. Both they attended one of our shows and after that, they were on board to work together with us. During the production, they didn’t change much but what they did was adding an extra sparkle to the songs. Of course, that brought our material to the next level.

Subsequently, we finished our recording session in 2019 just before the pandemic happened. Then, we were sitting on our album during COVID. And, luckily, we had some outdoor show that helped us. But the pandemic has put the release of our album uphold for almost one year which has been quite frustrating. Finally, we are quite excited to get out there, to get in people hands’ our album and share it with everybody.

You have just mentioned Reeves Gabriels and Mario McNulty. About this, which is the important lesson that you have learned during with experience?

Hmmm, it’s a good question [laugh]. I mean, I’ve learned that collaboration is really a beautiful thing. So, the more heads you get together, the more the songs grow and develop. Then, through this experience, I’ve learned to put an end point on how much time you spend on a song because you can be in the studio fixing a song forever. You know, it’s good for you and the band to set boundaries.

Then, it’s important being open to other people suggestions’ and to trust other people instincts’ even if they are different from mine. Lastly, it was interesting to explore other ways to challenge myself as a singer and as a songwriter. Indeed, that was part of letting of the artistic control. In the end, the outcome is worth it.

You have unfortunately mentioned about the postponed album release. However, it’s officially here. And from “Dear Onda Wahl”, the singles “Mermaid” and “Lover by Proxy”. Which insights can you share about these two songs?

So, both are centered around a person in my life with which I had a romantic involvement. It was an ambiguous relationship with someone who turned out to be unavailable. Indeed, when I wrote “Mermaid”, I was attempting to understand if it was over or not. I was calling up on the universe for answers but the same time, I was trying to understand what’s going on in my life. And it’s for this reason that “Mermaid” has an aura of mystery.

While for “Lover by Proxy”, chronologically speaking, it comes after. And in this song, I’ve realized what’s happen and I’m feeling angry and resentful about it. Even though, these singles put on display my anger and different moods, “Mermaid” is more bluesy then “Lover by Proxy” which is more a stamp-on-your-foot rock song.

Indeed, you have mentioned that in the previous releases weren’t involved external collaborators. Considering this, which are the difference with “Dear Onda Wahl” and “Meanwhile…”? And, what can you recall about its production?

Well, if compared to the last time, we have musically pushed our boundaries. If with the previous album, it sounded quite southern rock tinged, now with “Dear Onda Wahl” we tried to achieve a sound less mainstream and exploring different genres such hard rock, ambient, psychedelic.

However, as far as songwriters, we have matured a lot and gained much more confidence in writing what we want while being authentic. Indeed, Mario and Reeve have motivated us to do it and go out there. What also I like about this album is it’s unpredictable because the songs present in “Dear Onda Wahl” bring you in an unexpected shore.

What’s in the pipeline for Lizzie & the Makers?

First, we’re looking forward to releasing this album. Then, we really would like to tour in California, Texas, London, and other parts of Europe. We still haven’t book anything yet because we would to see how this pandemic will develop.

But hopefully, we’ll tour in the fall and we’re also looking forward to going South by Southwest in the spring. Then, we have already ready 6 songs for the next full-length. So, as soon as “Dear Onda Wahl” will be released, we’ll hit the studios and release it next year.

So, Lizzie, this was my last question, I hope you did enjoy my interview. Please be free to conclude our interview with your last words or message.

Thank you for having me and I’ve enjoyed talking with you. I’d like just to add that these are some difficult times. Whether you’re a musician, an artist or not, please just keep on going and don’t give up. Even though, it’s quite challenging and this make it easier to easily give up, just ask for help and check with each other. And, if needed, ask for help.