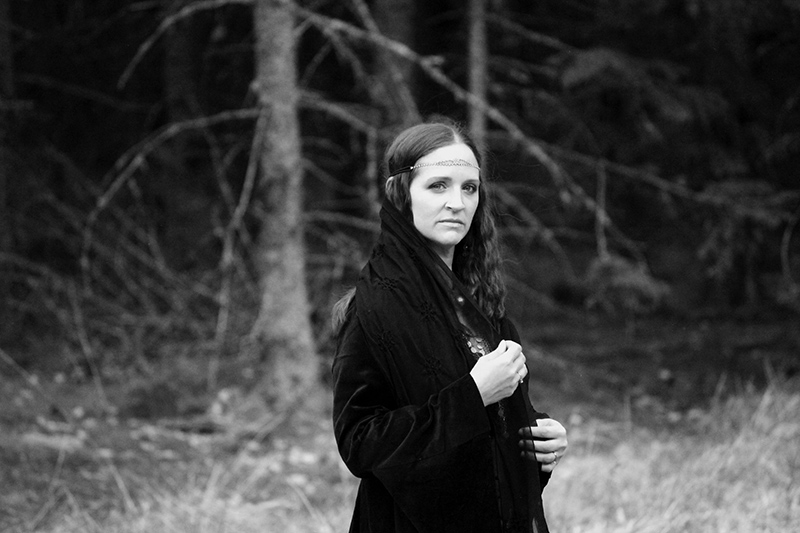 “Carmina Romanus” doesn’t just represent a new musical adventure for the classical trained vocalist and Therion famed singer Lori Lewis. On the other hand, it’s completely a new endeavor where the Oregon-based artist express freely herself in all her voice’s colors and peculiarities. Just a piece of advice, if you solely expect an classical album, you are completely out of track. I usually love to spoiler our readers, however what I can lastly add is expected to (positively) surprised.

Hello Lori, it’s an honor to have you here and thank you for this chance. Welcome to Femme Metal Webzine, how life is treating during these precarious times?

Hi, Miriam! Thanks for inviting me to chat. I’m doing quite well, actually. Life here at my home is pretty calm and relaxed for the most part. I’m currently working from home, which is pretty great. The best part of working from home is having all the animals around, definitely. Though I do have a kitty who really likes to walk around on my desktop and keyboard whenever I spend more than a few minutes working, haha! She is purring and making cute sounds right now as I type. I think she likes the sound of the keyboard clicking.

Before delving into your newly released solo album, I would like to take the opportunity of this chat to start a little bit from the beginning by asking you when you realized that music would be such a huge and important part of your life?

I would have to say since childhood. My maternal grandfather was a musician on the side when I was growing up with him (my mother’s parents raised me for most of my childhood). This meant I had music in my life almost every day. He would play piano and have me sing with him from a young age… I believe my grandmother still has a recording somewhere of me singing with him playing. I think I was about six or seven at the time they recorded us. I never realized I would consider music as a main part of my life, though, until I went to college and realized I excelled at music as a practice as well as theory. Once I made the decision to choose music as my major path of study, I felt I had finally found something that was both a natural fit as well as enjoyable on a deeper level. Music has always been both an emotional release as well as a vehicle for expression for me, so having the opportunity to explore a life devoted to making music in one way or another has been truly a joy. It has sometimes been my main focus, and other times has been a side thing, but music never fails to draw me back no matter what I may be doing in my life at the time. I feel fortunate to have found something that I can pursue for life. I’m still learning and exploring what it means to make music and be a musician, and will likely continue to do so for the rest of my life.

I know in a way that your musical inception started with the American symphonic metal band Aesma Daeva, which memories do you cherish the best and what did you learn from that experience?

My inception to “symphonic metal” was indeed Aesma Daeva. That was such a special time. I had no idea that my decision to take on a broader range of music-creating projects would lead me to working as I have in this multi-faceted genre. I’ve met so many talented musicians pursuing different paths within the metal or progressive metal vein. I also think that much of the music I made with Aesma Daeva was both inspiring as well as inspired. Working with John Prassas, Chris Quinn, Tim Klatt and Earl Root was unforgettable. Especially when we went on tour in 2008. I’m so glad we got a chance to experience the road for a few shows together before life took some pretty big turns for all of us. Earl inspired me to listen to EVERYTHING metal. He was so enthusiastic about metal and was such a great human. I miss him often and think about how ‘stoopid great’ his radio show was (“Root of all Evil”, which aired on a local community radio station in Minneapolis for several years). Actually, his show is still playing with some good friends of his now at the helm.

Then we come back to Sweden’s Therion of which you have been a member since 2007. Additionally since 2011, you have been confirmed one of the first permanent members along with Thomas Vikström. After this event, in which way has impacted your career?

I toured with Therion since 2007, but didn’t become a member until 2011. I wouldn’t say this necessarily changed my career… I would say it was more of a natural progression. I had found a group of musicians who I enjoyed working with and had similar music-making goals, which is why we ended up becoming official band mates. Though for this band, being in many different corners of the world is part of the mix. It means when we do get together, it is always very work-intensive. It’s also always so much fun, though, as well. I really enjoy getting a chance to chat with people who see the world in a very different way. It’s all about perspective.

Being a classically trained and educated opera singer, personally speaking which is the musical and shared meeting point between metal and classical music?

Well, in a genre such as the one I sing with Therion, it’s the same as any kind of genre mixing music project: the musicians. It’s all about the ingredients that make up the proverbial musician stew. The people who are tapped to create music end up lending the creative ideas that leads to what you hear. It’s fun to ignore musical barriers, though, so I particularly enjoy this kind of music-making. To be completely correct, I would not describe myself as an opera singer. I am classically trained and did study opera at one time, but would consider myself a musician who seeks out many different forms of musical expression in my own music-making and creating.

Recently, it was published as your first solo album “Carmina Romanus”. First of all, can you share a bit about its general production? When did you begin to collect the first ideas for it?

Production took place in three locations for this album: Russia, Sweden and Salem, Oregon, USA. The first ideas for this came from Christoffer. He had met a really talented musician/composer during one of his many trips through Russia, I believe. He was impressed with Anton Andryushin‘s songwriting, who composed all the music on this album. Christofer had an idea to help bring Anton‘s music to a wider audience. We wrote some lyrics and came up with the concept, and the rest is history!

Secondly, would you like to discuss with us a little bit about the lyrics and its thematic?

Sure. Christofer had a concept that these songs would fit well with a planetary theme. There is so much to draw from in regards to ideas, concepts and science. It felt like the storytelling would be easy if we used a unifying message for the album. A friend of mine had told me about an American writer, Dava Sobel, who wrote book entitled, “The Planets”, that ended up being great source material for writing lyrics. Many of her stories intertwine small bits of mythology as well, but it’s mostly a scientifically oriented description. Her writing style is beautiful, though, and the stories take on a life of their own in her telling. I wrote the lyrics for a handful of the songs and Per Albinsson wrote the rest.

I have got the chance to check out “Carmina Romanus”‘s artwork. Actually, it does reflect some classic Roman style and the planetary thematic. How does it connect with the lyrics contained inside?

I would say the lyrics are a mish mash of mythology, science and personal experience. Each song is about a planet except for “Sol Invictus”, which is about our star that keeps it all together.

By listening here and there, I have realized that on this record you used a mixed vocal style between your regular operatic style and the more modern one. How challenging was it for you to find the right formula for completely expressing your vocal peculiarities?

It took some time for these songs to gel, for sure. The album that inspired this recording used a singer who had a less operatic style of singing, though she was able to smoothly transition from a more classically-inspired sound and a more modern, rock style. Her interpretations definitely gave me a launching point for my own vocal choices and I feel it ended up being a good example of using solid technique while also taking some vocal risks.

In normal times, this question wouldn’t cause any embarrassment but I feel anyway obliged to ask you if you had any plans to promote live “Carmina Romanus” and instead, how did your plans change?

Actually, I expected this to be a bit of a stand-alone production. I do hope everyone out there finds something enjoyable in this recording. I know I truly enjoyed the process of creating it and am so happy that I got the opportunity to stretch a bit and do something that was a departure from my more traditional, classically-oriented style of performing that I have used with Therion. In some ways, I feel this album is a bit of a hearkening back to my time with Aesma Daeva, where I was given the opportunity to play around with different sounds, vocally. It would be amazing to get the opportunity to perform some of these songs live someday. I love the process of creating music and equally love getting a chance to share my passion with others via the performance space.

Related to the previous question, which are your future plans in terms of new releases and recordings?

For now, I’m mostly planning to just make it through our current situation. It’s hard to say exactly what those future plans may be, but I can say that throughout the pandemic I have definitely been taking personal measure regarding what really matters. I would say, for me, music matters. And community matters. These are the things that inspire me to make music and to continue creating.

So, Lori, we’re almost at the end and with this please be free to say hi to your fans and your readers. Thank you so much for this interview.

Thank you for taking the time to write a few questions down for me, Miriam! It has been a pleasure. As to the fans, I say get out there and make some music of your own. And be as free as you can! Much love to you all.