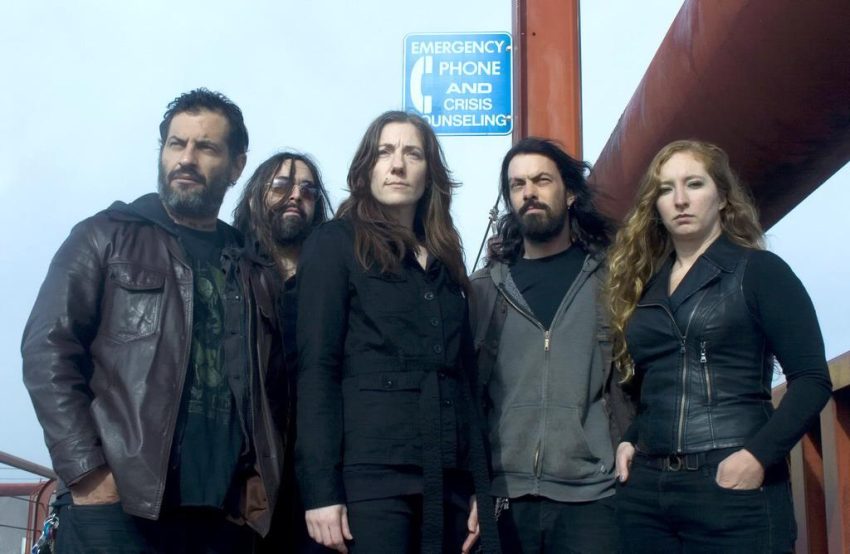 LUDICRA – An Interview with Laurie Shanaman

Even posthumously, I’ve achieved one of my long-time goals. Yes, I can say it. I have interviewed one of the well-kept American musical treasures, the black/avant-garde metal band Ludicra. The band split up back in 2010. But their four full-lengths are still carved in stone for the annals.

Though, everything is not lost. Recently, the band announced a special show in Seattle for the North West Terror festival this upcoming summer. Together with the singer Laurie Sue Shanaman, let’s see what lies ahead.

Hi Laurie, welcome to Femme Metal Webzine. I am super-honored to host you here. How are you? And how these precarious times are treating you?

Thank you so much, Miriam. That is so sweet of you. Although we are heading into year 3 of the pandemic, I am somehow doing ok. These times have been stressful in a myriad of ways for me. But I am grateful that I can work this entire time despite many challenges. It has been difficult for so many people.

And I am just trying to hang in there like everyone else. It has been sad to see so many venues and businesses struggle with little support (especially in greedy self-independence Merica). So, I am happy at least to see that some shows can start again. And that mostly all (not everyone that is disappointing) are trying to keep things as safe as possible.

Despite all the ongoing challenges, I am already feeling concerns about the harsh-industrial ambient-noise band, Omicron! I’m seeing shows and tours getting canceled more and more in just the past week. Indeed, it’s sad that we cannot get ahead of this deadly virus despite so many of us making our best attempts at safety.

Before getting into the present and Ludicra’s recent announcement, I would like to set the time machine back to 2010 with the last LP “The Tenant”. What can you recall about its general production?

Much of the album was written at practice. Guitarists John and Christy worked well together, building on each other’s riffs and compositions, such an organic connection that I still l miss to this day. It was often an exciting thing to witness and be lucky enough to participate in. It was a slow process writing “The Tenant”, but it came together as it always would. I felt excited about the songs and felt we had something special, despite my struggles with completing the lyrics, but I had Aesop to help me with this.

And I’m still grateful for his support at the time. Living in the Bay Area has its setbacks that kept many of us desperate musicians at a slower pace. Most of us only had the free time to practice once weekly, other band commitments had tours. Life can get in the way. And it certainly did. We successfully managed to record “The Tenant” in the summer of 2009, with the fabulous Justin Weis at Trakworx here in the Bay Area. I still think he’s the best recording and mastering engineer I’ve worked with.

For example, there were a few challenges. Such as, I came down with the Swine Flu in the middle of recording vocals, but it all worked out in the end. And, I’m still very happy with the album. Of course, we were so lucky to have our talented artist taking care of the artwork, our bass player Ross Sewage.

Being in a band here as I get older, I’m experiencing the same struggles. I have the eagerness to hopefully to musically more involved. But, the grind can get you down and let you down. Sometimes if not often lately. I’m about to turn 52 years old but I recognize I’m not done yet!

Unfortunately, just one year after the release of “The Tenant”, Ludicra announced the split-up. What has happened between the band members? And what has led to such a painful decision?

Well, they say all good things come to an end as they say. Something with the overall communication just died. A few members quit quite abruptly. Also, I believe that other band commitments may have got in the way of Ludicra’s slow but steady path. But, regardless of the feeling that we ended prematurely, it’s been over a decade now. And, it’s simply just time to accept and move on. I’ll always love and care for all of Ludicra’s members.

After so many years of wanting to reach this uncertain goal, we were so thrilled that we at least finally made it to Europe and played Roadburn. It was so wonderful to finally experience it, even if there were some bumps in the road. I’m grateful to play a handful of shows with them hopefully next year as planned. As long as COVID doesn’t get in the way.

Every event brings with it a sort of a life lesson. Both musically and personally, which is the main lesson that you gain from this split up?

Indeed, a life lesson! Even if something feels completely impossible to mend at the time, I often wish I had tried harder to mend it, but you can’t let it take over and ruin your present life, trying to move on from any relationship be it band or partner or friendships, is always a lesson we all have had to endure in this life, it’s part of life as sad as it can be.

Also, life is too short and painfully fragile for the miscommunications and stubbornness, I learn this every day, especially as I get older. I’ve also tried to learn to not have huge expectations even if we deserved better because I now believe we did deserve better as a band, but you can’t let the lack of “success” destroy you. Sometimes it is the luck of the draw, sometimes it is the real hard work, the ability to be able to learn and improve with time.

Trying to have a thriving band is not always easy, but you can keep at it and hopefully still get the same enjoyment from it as you did in your 20s. I’m still grappling with a lot of this and still trying to recognize my accomplishments, even if they were and are few, I’m not as hard on myself about it anymore. I try my best to not harm, but also take no shit

The occasion of this interview is quite special: even though Ludicra‘s results are still officially split up, recently the band announced a show in 2022 for the Northwest Terror Fest. How do you feel about it? And, how did all this come about?

I’m very happy and excited about it. I was completely surprised that everyone agreed to it. I also think the pandemic added to everyone taking a step back or perhaps a step forward to consider such a thing. The idea of playing some reunion shows was brought up a few times by our former tour booker, Nate Carson from Nanotear. But it never went anywhere until during the pandemic last year when both Nate and NWTF asked again if we’d consider it for 2022. So after some months of unsureness, everyone was on board.

Also, can we officially say that the band is back in business, or this live show is a one-time-only event?

I’m pretty sure at this point it’s mostly for closure. And we will not be an active band with new material. I’m just grateful to play a handful of shows with them hopefully next year as planned. And if all would be in agreement, I’m very much interested in playing a show or fest in Europe as I feel we had quite a few diehard fans there. So if this could happen, I would be content for eternity. Fingers crossed, but I honestly don’t know if there is an interest in this overall. Besides me being very interested of course.

In conclusion, I’d like to spend a couple of words on your band Ails, what are the next band’s plans?

We have also had a few bumps in the road lately due to logistics (one member has moved to Portland, Oregon) and some surgery/health stuff. Once we figure out logistics and a plan, we hope to work on another recording and album release. Then, play some more local shows here and there. It would be nice to go up to the PNW again. We’re not a touring band. But now we need to rethink how to continue while not being all in the same city. If Ails will prevail and make it work, we’ll continue!

Despite the pandemic, what is it in the pipeline? Which is the thing that you are more looking forward to? Which are your plans?

Well, I’m certainly looking forward to starting rehearsing in 2022 for the Ludicra reunion shows. Even if, it ends up only being a handful, I look forward to this experience. Then, more with Ails. I don’t have much in the pipeline. But I would be eager to do more musically if it comes my way.

if possible, practice more singing or a small project or something. It has been a good day today for me. Visiting my mother in NJ again more often would help a lot. I dream of traveling to Europe, especially Scandinavia and Ireland. But, these are dreams for now. I hope to stay healthy, have a good quality of life, and not get evicted. Indeed, housing is getting quite unaffordable.

So, Laurie, we are almost at the end. Be free to say hi to your fans and listeners.

Thank you so much for this interview. And, I hope to meet you in person someday at a fest or show. Hello to everyone, sending love and my hopes for all. Just to keep enjoying live music and having good health and joy in their lives.