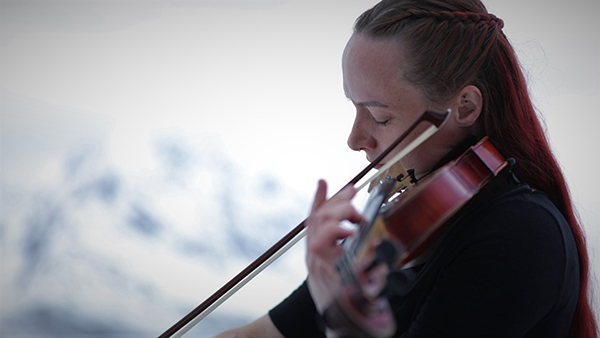 If you love stillness and tranquility, for sure, one place to visit is the North of Norway but additionally, if you love “a unique blend of contemporary classical, experimental alternative rock and folk music”, please don’t search anywhere else because, recently, Dutch-Norwegian violin player and singer-songwriter Luíra has released her debut video “The Secret Medicine” taken from the upcoming solo album “Free”. In order to know more about her and her music, I’ve had a nice interview with her. Enjoy!

Hi Luíra, welcome to Femme Metal Webzine. How are you and how this precarious and strange period is treating you?

Heia Miriam, thank you 🙂 It is a strange and difficult period for everyone in this world. It was not easy to move to Norway and establish myself and my company here when the coronacrises came. Luckily because of the fact I work a lot in my own studio and I am able to give music lessons online it is not too bad.

First of all, for who’s not familiar with your project would you like to tell us how everything began?

Sure! It began actually when my former band, Adeia, broke up. It was at the end of 2016 and most of all quite sad, but we have had eight fantastic years I will never regret or forget! When in the beginning of January my father got really sick, I couldn’t think about music and I didn`t know what to feel anymore. I decided it was best to have a break for a little while.
Then suddenly, in March 2017, the ex- drummer of Phantom Elite contacted me, Eelco van der Meer asking if I was interested in playing violins for their single “Wasteland”. Of course, I said yes.

During shooting of the videoclip and the recording of the violins I also came in contact with producer and guitarist Sander Gommans (ex- After Forever, MaYan). We started talking, and I told him my story and about Adeia. He said it was really a pity we broke up, but, if I had new ideas or wanted to start again, I could contact him anytime. After a few months I started composing music again and I decided to write to Sander. So, in September 2017, I started my “official” journey with writing songs and producing lessons at The Rock Station.

Besides being an amazing singer, you are also a violin player. When your passion for this instrument started and what can you tell us about your professional musical education ?

Thank you so much! Well, actually I started at a young age (I was nine) with playing the violin. I loved the sound of the instrument and my grandfather, who had taught himself, gifted his violin to me when I was that age. After that I decided I never wanted to stop and I wanted to be a musician.

I started at a music school, and after a year my violin teacher told my mother she couldn’t teach me anymore because I was learning so fast and had such a good sound and feeling for the instrument. My mother didn’t know who to call so she called the Conservatory in Amsterdam for help.

They advised to audition for a private teacher who worked together with the conservatory there, Julia Veerling. I had eight years of great lessons with her, and in between from Jan Repko and later from Julia’s husband, soloist Jeroen de Groot.

In those years I played in several youth orchestras and took part in several music competitions (Prinses Christina Concours) where I won prizes three times, one for best performance of Kreisler‘s “Prelude” and “Allegro”. When I was nineteen I auditioned at two music conservatories, Rotterdam and Amsterdam, and I was grateful to be accepted at both. Of the two I chose Rotterdam because they were more open minded in my eyes. There my journey really began!

At the beginning of October, it was revealed your debut single “Secret Medicine”. What details can you share about this song?

Most music I write of is about personal things that I went through, nature, injustice, psychology, the effect of humanity on the earth and philosophy. Secret medicine is about the dark and the light. About depression and the influence of society: from busy cities, to rushing people, and overcoming trauma.

It’s about the purity of mother nature and how we can find our way out of the dark depths of our soul. How the silence, the peace and simplicity, and last but not least, the beauty of unspoiled nature around us are the key to happiness and true peace of the mind.

Your musical background encompasses both classical music and the heavy metal one, in which way is possible to build an efficient bridge between these two distant worlds?

Well, how I see it, is that for me they are actually really close to each other. I can explain the best with an example through music: Mussorgsky‘s “Night on Bald Mountain”. For me one of the many examples that show how close they actually are! In our time Mussorgsky maybe would have been a heavy metal composer haha!

Regarding my new music I wouldn’t say it’s metal or classical, but more a magical combination of many music styles I like and my own imagination; for me it feels even more that I have found myself, more than ever before. In this new style everything comes together.

About heavy metal, I remembered that you were the lead singer of the Rotterdam-based progressive metal Adeia. Sadly from its silence, I must deduce that the band is not anymore active. But I was curious to learn, what did you learn from that experience and which are the most important lessons that you are applying now with Luíra?

That’s correct, like I answered above, Adeia is not active anymore. Actually I was the founder and one of the composers of Adeia too, but not the lead singer; more lead violinist haha 🙂 I learned a lot from founding and leading the band, it was not always easy but worth it every step of the way.

Everything I learned according to the promotion, getting yourself out there, talking in a more comfortable way with people (I was kind of shy) helps me in many ways today. I am really grateful for that and all the great years we had with Adeia.

How did the conscious choice to relocate from the Netherlands to the North of Norway influenced you as an artist and as a person?

Before I moved here I have been to Norway 16 times, and almost everywhere in the country. I was enchanted by the amazing nature, the silence and the feeling of being free up here. It felt like coming home; a feeling I never had anywhere else before in my life.

And then, just a few years ago, I found out through a DNA test that I am half Norwegian, all the puzzle pieces fell into place for me. Then, Adeia broke up at the end of 2016 and when later my father got a stroke and went into a coma a few days after new year`s eve, I felt like I was completely lost.

But then I remembered, when I was at my lowest point, one thing my father told me a few days before the stroke and he told me: “Laura, my dear, I want that you are happy with anything you choose to do in your life. Follow your dreams, because we only have one life. Choose wisely, and no matter which choices you make, I will always be with you. Don`t make the same mistakes I have made, but truly “live” your life, like everyday is your last”.

And then I knew what to do: I decided to make a plan to follow one of my biggest dreams: to move to Norway. So, I could make music here everyday in peace, walk free in the mountains, daydream while sitting at the shore of the unending fjords, to let my hair dance in the wind with the magical northern lights above… so my soul would be free.

Now, one year later, I must say it was the best decision in my life. To live so close to untouched nature brought me peace of mind, unexpected true love (I will not mention names haha), it brought me closer to myself and I don`t rush so much anymore as I did before. It was not always easy to start completely anew, but I wouldn’t change anything of my journey or the choices I made along the way. Sadly my father passed away recently, but he is with me every step of the way in my heart.

What the future holds for Luira and how the pandemic impacted your original plan?

At the moment I am busy with the last compositions, arrangements and mixing of my upcoming debut album, “Free”. A second single will soon be released at the end of November and to give a little sneak-peak, I have recorded for the first time with a new instrument on this song which is a Sami drum.

Probably the next year I will release my debut album, precisily when it depends a little bit on the pandemic, but we will all find a way to help each other, to help the earth and to be healthier as long we stand together as one.

So, Luíra, we’re at the end of the interview. Please be free to say hi to your fans and our readers. Dank je wel.

Dear allesammen, thank you so much for your interest and all your support throughout the years. A big hug to you all, stay safe & healthy and warm regards from the North!