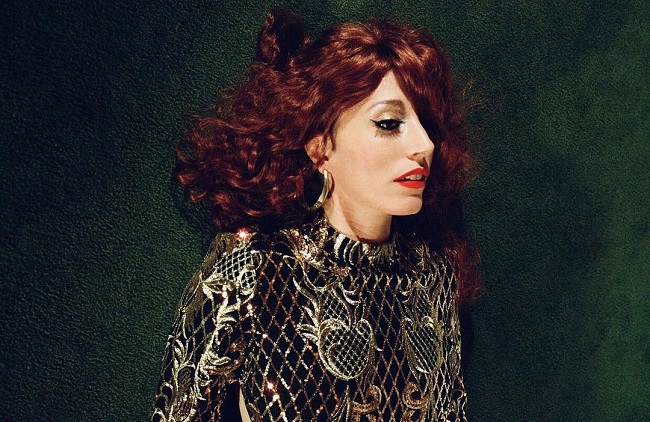 Even if it’s not physically possible, artistically speaking, Miami-based artist Sara Timms has lived through not 7 lives like a cat but it’s safe to say that at least 50 are there. And LVXURI is another of her artistic reincarnations which it’s already sparking a lot of interest. Now, her artistic alter ego is Aurora Dawn and through this electronic art pop project, the artist is appreciating and discovering one of her thousand facets of her artistic world. Enjoy!

Hi Sara, welcome back to Femme Metal Webzine. How are you and how life is treating you in these precarious days?

Hello again, and thank you for having me back! Life looks a bit different, but in essence I am still able to create, learn, heal, and teach, so all is quite well actually.

For our readers that are not familiar with LVXURI, would you mind introducing us how this new musical path started?

To make a long story short, I peered into darkness in all my creative and spiritual pursuits for so long that it finally peered back into me…and near complete dissolution of self followed. For a time I could not relate to anything I’d done before, as the darkness I found myself in was so utterly complete that I only felt the need for light in order to survive.

In this place a seed emerged, and she was Aurora Dawn whom inhabits the world of LXVURI. I wanted to make music that you could move to…that would perhaps serve as an enlivening elixir, rather than the doomy trances I had created for so long. Music that brings the sunlight to cut through the Mists of Avalon.

Would you mind telling us about the recording process for “Headlights” and how it was received by press and fans?

“Headlights” is part of a larger body of work that I created with Dylan Neil of Thief. I booked a show at Zebulon (LA) on 6/9/19 a month out with only one song written, which was “Decussata” with the overly confident goal of writing 5 more within a month. Beats have always been incredibly important to me whether live drums or programmed, and I envisioned very polished, sleek beats which I did attempt to create over a week or so, quickly realizing there was no short cut to this learning curve.

In relative desperation I contacted my friend Dylan who’s beats, production, and music I’ve always been a big fan of, asking if he might have some beats already made that I could work with to make 5 songs for this show. I sent him a playlist I’d made of influences, and beats that I felt aligned with my concept of LVXURI, and in a few days he sent not beats, but several fully arranged songs which just needed vocals.

My mind was pretty blown as it was all completely in alignment with what I wanted LVXURI to sound like! I wrote all the vocals and lyrics to five songs in the next two weeks, and performed them w/Dylan at Zebulon. After that we laid down vocals and voila!

I stay fairly aloof to the perception of my music from press and fans, as it really belongs to them once it’s out. I try to think of it like Tibetan Sand Paintings which are destroyed almost as soon as they are created. Cvlt Nation was kind enough to premiere the video, and had very complimentary words along with that which I appreciated very much.

The question might sound overrated but who is your alter ego Aurora Dawn and how has she revolutionized your artistic approach towards music?

Well, in the simplest terms she is my Solar Incarnation, the projection of a female from a male intelligence. In LVXURI‘s “reality” there is a man named Jacques Raymond who was very fond of 80’s soap opera’s and film noir, and he projected Aurora Dawn into being as his ideal partner. There are many details which will be revealed in time regarding who she really is, but to keep it short we could say she is a AI/ALIEN consciousness learning to be a good and loving human. But she is also Raymond.

She wants to make people happy, to serve them. And so she tries to make things fun and entertaining, even though there may be deeper wisdom she wants to share. She’s a bit of a Mary Poppins in my opinion with the “spoonful of sugar makes the medicine go down” approach. Musically I think it’s less self indulgent than all of the other music I’ve made. I’ve always wanted to create unique music, but in all other projects my goal was to serve something larger than humanity.

Also, to channel something through music that felt transcendent. In a way it was completely ego-maniacal to have the goal of being the vessel of the infinite. In retrospect it sounds like something a cult leader might aspire to.  With LVXURI my goal is to commune with humanity. To give them a Peach Flambé instead of luring them to Hell, or Heaven.

For what I had the chance to experience, the visual part has an important place on LVXURI. How was it conceived and which were the most representative models that you got inspired by?

I had never been comfortable using myself as the main canvas in my creative musical projects, but when LVXURI and Aurora Dawn arrived in my psyche it’s as if they came with instructions. It does not feel like it’s up to me, and for better or for worse I am the body which serves as the mannequin for Aurora Dawn‘s unfolding identity over time.

Given this new artistic project, can we consider you have closed your involvement with Black Mare, Ides Of Gemini, Black Math Horseman?

All of my projects are doorways to other worlds, and as long as the other members exist, they still exist if the universal forces align to re-open any of them.

What does the future hold for LVXURI?

I have a total of 5 songs to be released in 2021, which all will have a video/visual component as well as a special merch offering. I’m treating them like little mini-music-film premieres.

So, Sara, we’re almost at the end and with this please be free to say hi to your fans and your readers. Thank you so much for this interview

Hello to my old fans and friends and any who are new to my work! Thank you for taking the time to listen to and absorb what I have to offer. Love and LVX to all.