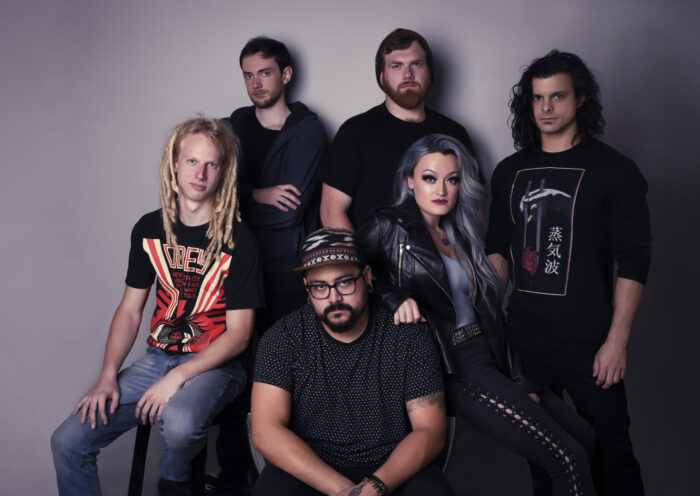 Since Femme Metal Webzine exists, we always tried to be at the service of the bands by offering them a space here. This hasn’t changed throughout the years.

So, it’s time to introduce the Raileigh based band LYLVC. The band has successfully finished a national-wide tour together with New Year’s Day. However, the interview happened during their general preparation and in conjunction with the release of their debut EP “Perfect Drug”. Let’s discover more together.

How are you; How is this period treating you?

Both: We are doing well; I am excited about our new song, “Undertow.”.

I just received the press release. What piece of information can you share?

Oscar: “Undertow” will be our official third release. We recorded the song at the Digital Thunderdome Studios in Atlanta, Georgia. They have collaborated with bands, such as Ice Nine Kills and Meshuggah.

We spent one month ahead of its preparation for the actual shooting, and we worked with so many exciting artists, including a magician called Lady Houdini. Behind all this, we received some tailored fit dresses that were in theme with the main scenography. In the video, we essentially wanted to portray this overwhelmingness when you feel underwater and draw from the realities of life around you.

Alyse: We produced and recorded by Mike Plotnikoff and Joe Rickard. They are amazing people who have already worked with bands such as Halestorm, Three Days Grace, My Chemical Romance, and other great bands. We were excited to record our songs out there. They produced it the way we wanted, and the video had to match it. Now, for one moment, I want to reconnect to what Oscar has previously said. If you’re feeling underwater, you’re surely going through something dramatic and stressful.

So, if you’re feeling overwhelmed, you might not know how to handle it; but they might watch you, monitor you, and not help you; you might feel like you’re screaming in a crowded room. And nobody even looks up. So, my initial idea for the video was as I was waking up in a water tank. Then, we developed further by putting me in the water tank with waterproof electrodes.

As an effort to get out, I’m banging against the tank. Nobody gets my attention, even the doctor who monitors my values. You can see me in the video with the water up to my chin. Since we wanted to show how it feels to be desperate and drowning, we discussed the scene in detail. The video clip further evolves between showing reality; and its consequent traumatic experience and the reimagination of coping with it. The whole project turned out to be out of our budget. Luckily, the magician Lady Houdini offered to use her unbreakable water tank with her chains without additional costs.

The single “Undertow” is part of the upcoming debut EP “Perfect Drug.” What can you share about its production with Mike Plontikoff and Joe Rickard?

Oscar: Our first single is our title track; for the whole production, we went to California; at the time, we already had a list of songs to prepare; though, our producer Mike came up with a homework project that involved composing songs specifically during our trip; and, we had just two weeks to achieve this goal; so, we’re scrambling to collect ideas until 2 am; in this process, the title track is one of the last recorded songs; and I still remember sitting all together in an air B&B struggling with our material; in the meantime, the day of the recording session arrived and still, we had any complete song; anyway, we entered the studio in an attempt to record something and, the internet went down.

Oscar: [laughs] what we did is put together what we had for the chorus; each of us liked the outcome; as soon as we approached the studio team, the WiFi came back; so, in that instance, fate granted us a couple of extra minutes to reach our goal.

It was the first time I learned about a producer’s homework project.

Oscar: it was surprising for us too [laughs.]

People’s expectations about a producer are being sat on a chair and just offering tips here and there; on the contrary, it’s quite the proactive approach.

Oscar: Since the first time we talked with Mike, we had the impression that he was intentioned to have an active role in what we had in mind; in the week we booked the studio, he helped us to channel that energy and focus into our music; bout the housework project mentioned before, I think he wanted to see how we would manage when the pressure was on; according to his experience, it’s in this sort of situation that the best songs produced.

You are quite the debutants, and I was curious to know which life lessons you have learned throughout this recording session with Mike.

Alyse: It was surprising how perfect you need to be with notes; if something is out of place, you need to rewrite the song from scratch; you need to be practical; and, if that case happens, you need to write harmonies on the fly and a perfect pitch; in short, you need to be at the top of your game because they will challenge you; they will push you to be the best that you can be; for me, just, it was eye-opening.

Oscar: Definitely, along the same line; additionally, I learned to be open to collaborating with other people; and open to trusting someone else; during this session, we exchanged notes and critics; this was essential for creating the sound that we achieved to have on our EP; we have to be open to accepting other people’s critics and input; in the end, it’s all about trusting the people with which you decide to work.

Alyse: On top of all, this was the first time that we, as a band, were traveling together; this was a try-out for our upcoming tour with New Year’s Day; before this, we’ll have a couple of shows in Delaware; then, we’ll drive to California to start together with NYD the tour; it will be a real challenge on how we can be capable handle to our boundaries; we come to terms to being collaborative and not being at each other’s throats; we also agreed to start composing new ideas for the upcoming album in between the gigs.

For the upcoming tour, you invested some money to buy a new van; what do you feel about this extensive tour?

Alyse: I’m excited about this upcoming nationwide tour with New Year’s Day; I love their music a lot; it will start in California; it will stop in cities such as Pheonix, AZ, and Albuquerque, NM; Texas, Florida; it will begin on the West Coast and conclude on the East Coast; I’m so grateful because it will be a fantastic experience for us.

Besides being catapulted in such an impactful environment as a nationwide tour, what scares you off?

Alyse: I’m buying so many things in preparation for this tour; for example, I’ve bought tire jacks in case of a tire accident; then, music insurance, and road assistance; I’m being proactive with my purchases.

Oscar: For me, the scariest thing is not knowing what you are preparing to [laughs.] However, we have spent so much time together that this upcoming experience will push us to realize how it is to share such a small space for a month; and creatively how we will manage with such hecticness.

We have abundantly introduced the new single “Undertow.” But before, LYLVC released two more singles: one is “Perfect Drug.”; there is a sentence that strikes me a lot: “Another message left unopened, I didn’t call the end of the night.” Which is the meaning that lies behind these words?

Alyse: I wrote this song after experiencing heartbreak; as soon as this happening went public, people started to flood me with messages with date requests; I didn’t want to refuse; I wasn’t in the right state of mind; I didn’t feel it; I wasn’t ready to reciprocate the same feeling.

You know, you need time to heal yourself.

Alyse: Even though you’re not ready for a new date, I still wanted to stay in touch with people around you; I wrote that verse because I felt not being the right person for a relationship at that moment. The quote “don’t fall in love because I’ll be the perfect drug” exemplify the situation: don’t fall in love with me because I won’t be able to reciprocate.

Oscar: In every song that LYLVC composes, we consider the vocal approach in a duo; in this case, the voices coincide; they represent the vulnerable (the suffering and inability to love) and the darker side of it (taking advantage of the situation.) In my verse “the ghost between your thighs,” I wanted to portray the darker side of a suffering person who decides to retaliate after a betrayal.

My interpretation was more related to a person addicted to illegal substances; who has been struggling to win the battle against his-her addiction; in this case, your interpretation has a logical sense.

Oscar: Congratulations because our intent is for listeners to have their impression of the song; we don’t get to explain the songs to everybody [laughs.] Our listeners must find their own stories to connect in their way; our goal is to let the listeners realize that they are not alone.

Alyse: Your interpretation is valid because it relates to an unhealthy coping mechanism; it could be love, or it could be drugs, either way, there’s a point of no return; in which you turn involuntarily into a monster where you feel alone inside your hell.

The second single you have released is “Heirloom,” a verse that caught my attention: “I can flash all my emotions like you taught me yesterday.” To what are you alluding?

Alyse: “Heirloom” depicts my childhood trauma. And, if it is someone you have looked up to as a parent who hurts you, then you build up some imaginary walls as a child to protect yourself; Consequently, these imaginary walls impede you from unveiling your emotions. It is one of society’s standards to teach to keep all your feelings in.

Then, it will later reflect in your adult life because you mistrust others and be unsure. These walls are so thick that I am incapable of allowing people in and being vulnerable; however, I won my battle; I am not scared by humans at all; what scares me now are the monsters inside my head, not the ones under my bed.

First of all, thank you for the interview. We are at the end, and this is your space to conclude our chat.

Alyse & Oscar: Thank you so much for having us here today. We hope you’ll enjoy watching our music videos and are looking forward to seeing you all during our nationwide tour with New Year’s Day. On our official website and social media, you will find details about the cities in which we will play.