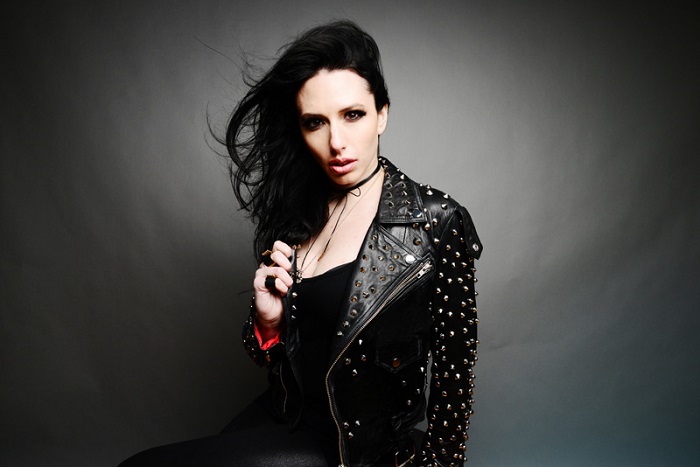 Madame Mayhem, née Natalie Ann Cohen, is a metal singer/songwriter. And unbeknownst of the European audiences, together her band Madame Mayhem has been jumping on and off of the American musical stages since 2012 which marked the release of her début “White Lies” via HeadBall Recordings. Now, even if her last full-length “Ready For Me” was released back in 2017, the NY-based artist is back with her amazing single “Cruel Heart”. Enjoy!

Hi Madame Mayhem, welcome to Femme Metal Webzine. How are you and how these precarious days are treating you?

Thanks for having me. You know, I’m hanging in there and as everybody else, I’m still stuck at home during these days. I’m trying my best to do the most of it by releasing new music and working on it. And lastly, trying to keep myself busy as possible.

For who’s not familiar with you, would you like to introduce yourself and how your musical adventure started?

Sure. I was born in New York city and I always wanted to be a singer and a performer. Actually, to everything began with my experiences in Broadway’s musical theatre and classical opera world, but I’ve been listening since forever to metal and rock music. Consequently, as I grew older, I was attempting to figure out the right career path for me that led to perform and write the music that I was listening to. So, that’s I kind got here.

Recently, you have released your new single “Cruel Heart”. What can you disclose about it and as the press release states, why for you it’s so special?

Sure, I love this song. Indeed, I wrote this song together with Keith Wallen from Breaking Benjamin which he’s also an amazing solo artist. On top of that, it’s one of the first songs that we have worked on together and since then, we are keep collaborating. You know, after we concluded our session, I left the studio and while I was in the aeroplane, I was listening to it.

Suddenly, I realized that was THAT song and how much badly I wanted to release the song for everyone out there. I was so excited about it. Unfortunately, it took some time to get released. However, before releasing the final version, my band and I decided to play it live on tour. It was the unknown song that our fans never heard of, and the main goal of this was to get their feedback and see how they like it.

Indeed, the feedback was incredible. As my tradition, I get to speak to my fans after the shows because I run the merch stand. So, people was coming there and just giving voice to their impressions and feelings.

Therefore, after listening to these important words from who help me to do my job, my fans, my fellow rock music lovers, I’ve realized that this was a special song. Given this, I was even more excited than now to share this because it feels like it’s a group project where each of us has equally contributed to.

As you have mentioned earlier, this single was co-written together with Breaking Benjamin’s Keith Wallen. How was collaborating with him?

It was incredible, he’s such as a great person which helps a lot when you are together in the writing room. Also, he’s a talented musician and songwriter. Even if, prior to writing we have met before, we never had the chance to know each other or sit down to meet beforehand. So, all this facilitate our writing session in bringing out the best from each other. In fact, he was able to bring out of me what I really want to convey in my music. It was really an amazing experience writing with him.

The title of this single is called “Cruel Heart”. To what do you refer to?

Actually, this song is about two different things with which my fans and the listeners can relate to. Because whether you’re going through a bad break-up or someone that you love is disrespectfully treating you, this song can totally deal with also struggles that happens on a daily basis. On a first instance, for me, as much I love my fans and being a musician, sometimes being this industry can be quite frustrating.

Personally speaking, “Cruel Heart” can be also about that. And even in people daily lives’ can cope with someone in their own work. You know, no matter which work career is, you have always attempt to wake yourself up. Indeed, if we take in consideration the lyrics, there’s a sentence that says: “What are you waiting for?”, “And show me your cruel heart” in order to be who you are and do what you do.

How much challenging is to take charge of your own anxiety, hurt and alienation and then channel everything into a pulse-pounding anthem? You know, I personally think that it’s difficult to grab all these feelings and then, mould them into something much more consistent and straightforward as a song.

Definitely. Through, it’s what it feels for me. Of course, it’s really complicated but after years of practice, it has become what I do. I feel that anxiety and all those struggling that I go through and writing about them in paper and all these frustrations, and then singing about them, and consequently reliving them, is really therapeutic for me. In the end, as hard as it is to initially share them, it totally make feel better.

It’s about being in charge of that even if, that the anxieties and the struggles are still there. You know, learning to live with and accepting them and be able to go through every day. But, being able to own it and then, being able to turn it into something that can be more positive or keep sharing the music that derives from.

It, maybe it can help people to have an outlet by just listening to the song I’ve created. Also, this will help them to know that they are not alone. In the end, it’s simply for that reason that I do what I’m doing and that’s why I love it so much.

So, Madame, your latest full-length dates to back to 2017 with “Ready For Me”. What can you recall about that experience and when  the next LP will see the light?

Yes, “Ready For Me” was the last full-length album and in between, we have released a bunch of singles including “Cruel Heart” . However, getting back to my LP, I can totally say that it was a great experience to work with. In this matter, I was lucky enough to write with Corey Lowery from the band Saint Asonia. Actually, at the time we had already worked together because he co-written a couple of songs from my previous full-length “Now You Know” too.

We have worked together for a while and we just had a great co-writing team and great connection where it’s very easy for us to write together. Lastly, I’m really happy of the final result of “Ready For Me” because it allowed to me to play full tour cycle in both the US and Europe, especially in the UK.  On a last thought, “Ready For Me” is a great representation of who I am today as an artist.

Considering the current situation, in a medium, long-term of time, which are your terms?

As you have mentioned, we have just released our brand new single “Cruel Heart”. My highest hope is that everyone gets a chance to listen to it whether it’s by streaming it on Spotify or by simply watching our video clip online on YouTube.

Instead, for what concerns the short-term future is to hopefully release few more singles and have more music to offer out there. I’m aware that these are tough times and since, we aren’t still able to tour, I still want give to the fans and to rock and metal music lovers some music that we were able to create throughout this period. So, please stay tuned because I’ll release more stuff.

For what relates to the long-term, as soon as are able to perform again, I’m very excited to perform my music live. Actually, it’s one of my favorite things in the world. I’m looking forward to connect again with my audiences. Hopefully, it will happen soon.

So, Madame, now it’s your space. This was my last question and please be to free to hi to your fans and our readers as you prefer.

Sure, thanks everyone to check out this interview, I really appreciated. You know, please everyone keep in touch with me. I’m always present on my social medias and I love connecting with the fellow rock and metal lovers. So, please reach out. I find it quite special that we can still connect during this time. Please stay tuned for more music and I hope to see you in person soon as we’re able to.