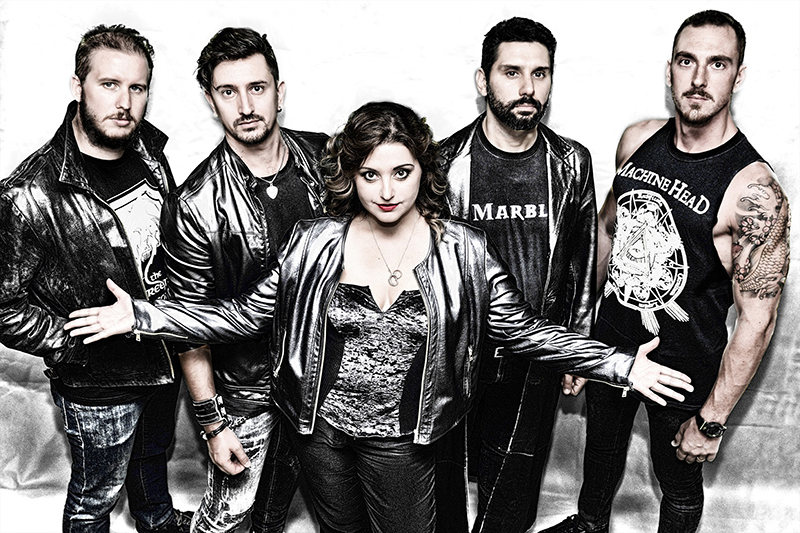 2021 is the year of comebacks, among one of those is Italy’s progressive metal band MARBLE. In fact, the second full-length “S.A.V.E” that marks the band’s comeback after 13 years.

It features the band with a revamped line-up and a musical evolution. In order to know more about it, we have enquired the singer Eleonora Travaglino and the long-time member and bass player Daniele Fleba. Enjoy!

Hi Eleonora and Daniel, welcome to Femme Metal Webzine. How are you and how is life treating you in these precarious days?

Eleonora & Daniel: We’re good, thanks for asking! We try to keep ourselves busy.

For our readers who are not familiar with MARBLE, would you mind introducing us how did the band come together?

Daniel: Since we’ve been friends and have always shared a passion for metal music, I came up with the idea of a metal band in the early 2000s together with guitarist Omar and keyboards player Jacopo. Also, our first drummer was a marble craftsman.

So, the choice of our name quite logical and easy because of our studio location. In terms of line up, our lead guitar Paul joined some time later. Instead our drummer Norman and our singer Eleonora completed the line-up only in 2020.

On Feb 16th 2021, MARBLE’s second album “S.A.V.E” was released. What would you like to share about its general production? When did you start to collect the first ideas?

Daniel: Well, it’s been a slow process because something had already been drafted after our first album “A.t.G.o.d.” . Then, we finally decided to complete this project after the re-recording of our song “Black Robes Order” which was previously featured in compilation of an Italian label. Actually, that re-recording symbolize the start of our collaboration with Eleonora. In fact, the outcome was quite nice. In order to begin the pre-production of the album, we have decided to re-arrange the tracks for her.

“S.A.V.E” marks your collaboration with the established US’s label Sliptrick Records. How and when was your first approach with it and how is going so far?

Daniel: Well, in spring 2020, we sent them the complete pre-production’s master. Luckily, they were interested. And then, they liked our project, and so here we are. So far, we’re quite satisfied because the label has been very supportive and collaborative.

Daniel: You know, that’s life. Events like the defection of some members for pursuing different things. Or, simply, we were not youngsters anymore and we needed a job. Or some of us started a family.

But we’ve always kept the flame alive. And, we’re still in touch also with the old members of the band.

Eleonora: In our opinion, “Heartless Disease” perfectly represents the new musical concept of the band. Originally, Marble started as a power metal band. Then, our approach evolved and now, it is more varied, heavier with a progressive vibe. Indeed, this song is about the deadly sin of lust. It is something that consumes you, but that can also give you a real sense of freedom if you let yourself go.

If we remove the full stops from the title album, the word that it will result is “save”. In this case, from what we should save ourselves? And how does it relate to the main album topic?

Eleonora: Actually, it’s an acronym for Sins And Virtues Ending which is also the outro track’s title. Though, what should we be saved from? Well, the listener has to decide. From our side, we tried to deal with this topic with a free mind. If you consider such, sins and virtues are not always good and bad because one cannot exist without the other one.

According the press release, “S.A.V.E” seeks to introduce a lyrical connection between three theological virtues and the seven deadly sins.

Would you like to explain in detail their connection and, which are the three theological virtues?

Eleonora: As a matter of fact, in the catholic culture, the three virtues are canonically Faith, Hope and Charity. However, our fans are already familiar with this topic because they are constantly present in books and movies.

Even though every track share a different story, they have to be considered as stand-alone. However, the main connecting point is that the different human behaviors match with each sin and virtue.

The album was produced by Moonlight Haze’s drummer Giulio Capone. How was this experience and what did you learn from it?

Daniel: Actually, Giulio is an old friend of mine. At the time, he also helped us with the previous full-length. Since he’s a drummer, he understand certain musical dynamics. And, with his help, we have improved our rhythmic section At last, It’s always stimulating to exchange feedback with another musician like him.

Also, the album was mastered and mixed by The Crown’s guitar player Marko Tervonen. How did this collaboration come about?

Daniel: In truth, he has just mixed the song “Mine”. Essentially, everything happened through a contest launched during the first lockdown. We have submitted just that song and believe it or not, we were picked as the winners.

What does the future hold for MARBLE?

Eleonora: Considering the ongoing situation, now we just focused on promoting the album. As for the future, we’ll see what it can happens.

So, Eleonora and Daniel, we’re almost at the end and with this, please be free to say hi to your fans and your readers. Thank you so much for this interview.

Daniel: First of all, thank you all for your time! Also, we are about to our new single “What Lead Us To”. I hope that our fans like and we are eager to know more about their opinions.

Eleonora: Also, “What Lead Us To” comes with an official video and it features our hometown. Due to the pandemic, it was quite challenging. But, we had a lot of fun filming it. Lastly, follow us on our social accounts to be up-to-date with our latest news. And more importantly, stay metal!!