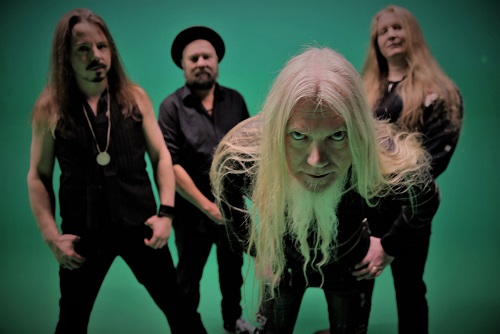 Please just forget Nightwish for a moment and its hype, I want to diverge your focus on one of the band members, the vocalist and bassist Marko Hietala. Maybe in all the band dynamics’, he surely gets obscured but his first solo album is here to state his true peculiarities as an artist. What at the beginning started as a solo project, “Pyre of a Black Heart” is a true testament of a pure collaboration between souls alike. Essentially, “Pyre of a Black Heart” represents his true personal essence and a life statement. I was lucky to meet Marko in Amsterdam during his EU tour in promotion for this fantastic album, discover more with us about it. Enjoy!

Hi Marko, welcome to Femme Metal Webzine. How are you and how this tour is treating you?

The tour has been really nice, we have already done quite an amount of shows and we have still two more to go. It’s been fun, it’s my first time with a new band, new stuff and everything but it seems that we are already into what we have been doing during the shows and it’s always very nice and confidence building. Actually, we have been having quite a lot of good times with the people.

You just mentioned that it is the first time with a new band and new stuff. So, how is it for you experiencing all this?

I mean, I like it because usually my main job takes me to big venues [laughs] so, this is me really because I like to be close up in the clubs and to the people. It’s really like you know intimate and closer and that’s something that I really like as a musician and performer because you build up a huge bubble of confidence between the band and the audience. I would say, a mutual bubble of good vibes.

So, today, we are here in Amsterdam talking about your first solo album “Pyre of the Black Heart” which was released back in January via Nuclear Blast. What can you tell me about its general production?

About its general production, well, we did it pretty much on our own without our own personnel. When I had some pieces and bits of lyrics and musical structures, I asked Mr. Tuomas Wäinölä, the guitarist and the keyboard player Vili Oillila if they wanted to come at my place where we might check these songs ideas and try to finalise them. Well, they got into it and they really like the stuff, so we started arranging and writing to feel the empty gaps and both of the guys wrote a lot of pieces and bits of music here and there too. Also, Tuomas [Wäinölä] is partly owner of a studio in Helsinki so, he got himself busy with the rest which includes engineering, mixing and producing the album which was the first time that he was doing that. So, we listened to his work and he was quite satisfied, focused to produce a good work because he even asked some pro guys different opinions about some technical details.

Yes, we did with our own group, so to speak and that also happened that the decision to involve the drummer was an early decision. We were just a group of relaxed musicians and what was a solo project developed into a band.

Do you see if this might have a future?

Yes. Of course, the future is very uncertain these days whether anyone of us will have the time [laughs]. Maybe one of us might be in the East under a notorious liar and all the little people that are running their corners in Saudi Arabia or whatever. I really don’t trust these people that take care of everything [laughs].

It probably sounds a strange question, what personally do you feel to have achieved with this release and how did you help to improve as an artist?

Actually, it’s a pretty hard question. I just try to write songs and songs that would be some kind of, you know, sudden substance, imaginary, stories or something from the reality. In the end, it has something with substance and the same it’s for the music. We would put in layers and atmosphere, essentially we would create tiny little worlds of their own. I don’t know if it was kind of a conscious decision but then it became that way when we started checking the whole thing and when we have put in order all, the songs had a really strong identity by themselves which it was great and then, they have been thought out with solutions particularly for those songs so,we didn’t follow any song pattern.

I’m aware that “Pyre of the Black Heart” was originally released earlier in 2019 in Finland only as “Mustan Sydämen Rovio”. I’m a bit of a language nerd, so I was curious to understand how literal were the translations and in any case, how much difficult was it to adapt them?

Well, originally the thing was that I’ve been writing songs both in Finnish and English and then we had this mixed bunch of songs. We thought if it was a practical solution to leave it like that. The original ratio was 4 in English and 6 in Finnish and then we thought: “What if I translate everything criss-crossed? So, we can put out both of them”. At the end, it’s what we did. The Finnish album was released first because we already had some deadlines which included that some Finnish festivals were booked for us to play. So, we had to get the album out before the festivals. Due to other deadlines, we had to finish recording the English vocals after the summer which then led to a release during the winter.

You can call it a nice and fortunate coincidence, if you want it because this allowed you to play an European tour…

At the end of the day, yes because it gives us time to concentrate much more. Even if the English album came later, some of the songs are original.

I was a bit surprised when you started to use the original spelling of your name [from Marco to Marko]. Is there any specific reason why you decided to use your original form?

There is. There is a reason, you know, the more I do this the more I live this life and I need how unreal the whole picture that the media and the people from you and everything. I like to present how ever I am whether it’s me on stage or being at home with my boys, whatever. It’s just there are facets of me, so every part of me is essential. That’s one of the things that when we Tarot boys when we started at the end of the 80’s, we started to get interest from record companies, we have kinda internationalised our names (for example, Sakari to Zachary) because it was the time that was cool and international to do that. Consider also that at the time we didn’t have this kind of globalisation and the possibility to have different perspectives. However, later on I had to figure out if I’m this guy that basically sees what it feels like it’s about to happen, it was kinda an useless burden. It was the last thing for me that was not real, so the album represents a fresh start.

Per se, it’s not much of a burden but it was more a question where my feelings were and I have figured out that I’m old enough to be just me.

Out of “Pyre of Black Heart”, you published two amazing singles: “Stones” and “Voice of My Father”. Would you like to share some insights about these two songs?

Well, “Stones” is one of the originals and that song was something that comes out straight out from an acoustic guitar, I simply added a traditional blues melody. Then, that set up the way the lyrics should into that bluesy kind of repetition. Mostly, the story goes from one stone to another. Actually, it’s a very bluesy way of writing and it’s kinda grim with a tongue in the cheek. It’s Murphy’s law. No matter what you do, you’ll be under a walk [Laughs]. If I’m not wrong you also ask about “The Voice of My Father” which is a different thing because that’s quite personal,it touches very much on real things like the thing that I say now: “Remember my father seeing me and my brother sleep when we were tiny guys”. I did that to my own boys, so there’s a continuity throughout generations and it’s mainly what the song is about and what we have shared during this generation. I was lucky because I was treated well but we have our faults: for instance,me and my dad were both full-blown alcoholics at one point. However, we get out of that pretty much alive.

Before concluding this interview there’s one final question: you describe the style of “Pyre of Black Heart” as hard prog. However, in these two words we can represent a clash of the titans because you mix hard rock and progressive rock…

Well, I don’t know, no really, I mean it’s pretty much connected with the 70’s when all these peculiar musical elements started to come out. Probably the progressive rock elements lie in the unexpectedness of the album: we didn’t over calculate and were not too much over-artistic. There are a lot of atmospheres and sound layers and maybe a type of song that you would expect from just one album or hard rock or metal but it has all those elements splattered all over the album in different combinations. so, when they asked me to define it, it was just a wordplay that came to mind at the moment. I said “Maybe it’s a hard prog” and now it lives on because it has been asked a lot.

Well, this was my last question. I really wanted to thank you once again for your availability and your time. Please be free to say hi to your fans and our readers. Thank you so much for this interview.

Well, I say hi [laughs] and keep on listening to real bands. Thank you so much.