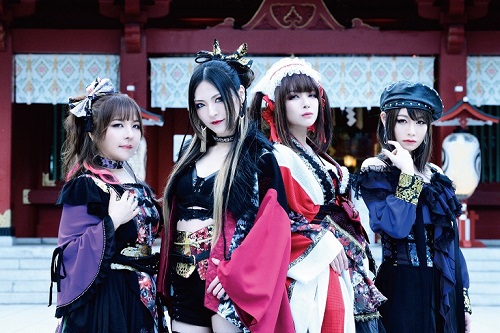 I’ve been following for years the Japanese all-female power metal band MARY’S BLOOD and by publishing this interview another dream is coming true. Before to let you enjoy this amazing interview, let me explain you how this rare occasion arisen. On the 26th September, the guitarist SAKI will be one of main artists in participating into the Livestream Event Shred RACERS ONLINE F2, Presented by YOUNG GUITAR Magazine × Nippon Cultural Broadcasting. For more information about buying a ticket and time zone, please click here. This happening led me to offer you a glimpse about this amazing band and their latest release “Re＞Animator” and her several projects in which she’s involved into. Enjoy it!

Hi SAKI-san, welcome to Femme Metal Webzine. How are you and how these peculiar days are treating you?

Hi! I’m busy these days for the 3 projects: Mary’s Blood, NEMOPHILA and AMAHIRU 🙂

Today we are here to speak about this amazing event called Shred RACERS Online F2 which sees you as one of the main participants in this special Japanese happening. What can you tell about it to our overseas fans and how you ended up participating in this exclusive performance?

The cyborg Eddie Ironbunny who came from AD 2300 started this event. He said in the future, the guitar music has been abandoned, so he wanted to stop the fall of the guitar music in this era. I met him last year, then IRONBUNNY and Mary’s Blood did the show together.

Also in February, I played the guitar instead of him for his “cooling time” during the IRONBUNNY‘s show. So we’re friends now and he asked me to join this event.

For the readers that are still not familiar with you, when did your career start and when did you realize that music and especially being a guitarist, would have played such an important role in your life?

I started my career as a professional guitarist with a band called “mixx“. Back in 2012, I’ve joined Mary’s Blood and then, I’ve formed NEMOPHILA last year.

When I was a child, I saw a band called “SEIKIMA-II” on TV.  They were soooo cool, and I decided to become a musician like them!

Besides being an amazing guitarist, you’re currently one of the lead guitarists of the power metal band MARY’S BLOOD. Would you mind introducing how you girls got together?

We knew each other before joining the band. One day they said that their former guitarists were quitting, so they asked me to participate in the audition, then I joined the band.

Recently, in August, MARY’S BLOOD has released their sixth album “Re＞Animator” via Tokuma Japan Communication which features 11 cover of several and different anime.

What can you share about its general production and how did you come up with this curious idea? Considering the enormous quantity of anime songs published so far in Japan, how did the band decide on which songs to cover?

Tokuma Japan Communications‘s staff suggested the idea to release the cover album of anime themes. Every one of the band loves the anime, so we chose our favorite anime and favorite musicians.

Among the 11 songs, we can find even XJAPAN‘s “Forever Love”. How challenging was it to re-arrange that song and how do you feel about it?

Well, the song is famous and has a high level of completeness, so we decided to play the song faithfully to the original one. We knew that EYE‘s vocal style is so different from Toshi‘s, so even if we played closer to its original version, it totally has the sound of Mary’s Blood.

I’ve been supported by Killer Guitars for 10 years. Using the “Fascist Vice” and also using 7 strings version of “Fascist Vice“. Alder for the body, maple for the neck, and ebony for fingerboard are used.

Lastly, I know also that you formed a new band with former Dragonforce and current Kreator musician Frédéric Leclercq, how was this collaboration born and what are the next plans for this project?

We met back in 2015, while we were in Hong Kong with MARY’S BLOOD playing as opener for Dragonforce.  We talked about the idea of making music combined with the elements of WEST and EAST then, and we started our upcoming project AMAHIRU. We’ll release our debut on Nov 27th while  our first music video will be uploaded on YouTube on Sep 25th.

However for MARY’S BLOOD, excluding any live activity due to the COVID 19 pandemic, what are the next band’s plans?

So, SAKI, we’re almost at the end and with this please be free to say hi to your overseas fans and your readers. Thank you so much for this interview.

I don’t play only in Mary’s Blood but I also for the “Yurufuwa” band NEMOPHILA and AMAHIRU. Please check those bands too. I’m playing in different styles. Thank you!