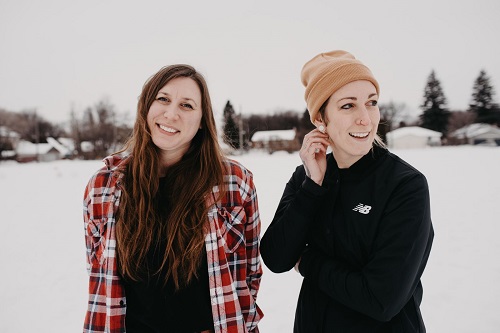 Strong of the fourth and newly released full-length “Don’t Worry” via New Damage Records and Gunner Records on the 6th September, Femme Metal Webzine had the chance to speak with this incredible Canadian punk rock duo about their recent European tour and this new release. Discover more with us. Enjoy!

Girls, welcome to Femme Metal Webzine, how are you and how life is treating you today?

Marcia: Life is great, today is my birthday!

Marcia: Thank you very much! We’re in Germany right now and we were just hanging out with a friend and we rented a canoe and we canoed on the river. After that, we had a nice walk but it was just a nice day.

So, this question might be a little overrated but it’s always nice to ask it: for those who are not familiar with Mobina Galore, would you mind introducing yourself how you two got together with this amazing duo?

Marcia: We started the band about 10 years ago, we both living in a place called Fernie in British Columbia, in Canada and from where we come from. Jenna and I met through mutual friends and she already lived in a home with a room that had the possibility to be used like a jam space but I had rarely someone who had their instruments in their place inclusive of full drum set, keyboard, microphones and guitars. It was really exciting and I was like, “Hey, I’m not good at anything but I can just dabble” and so, we started meeting each other for playing randomly on the instruments and then before we know it, we were just like “Let’s write a song or let’s over this song” and Jenna was like “I have already written some stuff, why don’t just create some songs out of what I’ve written?”. One thing led to another and here we are playing.

On June 30th, the new album “Don’t Worry” was introduced by your new single “Escape Plan” which also features a video. What insights can you share about both?

Jenna: I wrote that song during a nice summer day and originally, it was intended to be a solo acoustic song and not necessarily become a Mobina Galore‘s song. As soon as I published the acoustic version on YouTube, people got really excited about it and so, we decided to turn into a Mobina Galore‘s song and we wanted to choose this song as a single because it’s really pop-y. Also, we don’t offer write pop-influenced but since we wanted to have some fun, we really got along with this and we just figured to present it during a showcase in Winnipeg during the summer night so we just ride on our bikes from sunset to sunrise, we drink a lot of local beer and have the best time ever. However, the first interesting thing about this single from our records is that it’s a bit different and so far, it has been well received by our fans and our listeners during our live performances. This song has been good to us.

Additionally to the introductory single “Escape Plan”, on the 6th September it was released your third album “Don’t Worry” via New Damage Records. What you can partake about the overall process production?

Jenna: Yeah, we went to recording this album with a pretty musical clear vision of how it supposed to sound and we worked with the same producer of the last 2 records as well. Basically, we wanted to mark a difference between those two records and create something that was accessible to every typology of listeners, even for the ones who are not used to listening to punk rock but they are into rock, alternative rock and indie. So, we wanted to add more dynamics to the album and production-wise too. I think this time there are more layers of guitars, vocals but they quite subtle in order to not mess up our live show settings. We were quite excited to record something different and we are really happy of its outcome.

Right now, you are already busy with a bunch of Canadian shows but I’m utterly displeased to not be able to be present in Amsterdam. Mobina Galore toured European along with Laura Jane Grace and the Devouring Mother plus Frank Keep and the Future Violence. Musically speaking, do you prefer much more the live dimension or stably recording your material in a studio?

Marcia: They are so different because for both situations there are some pro and cons. Generally speaking, I think that we prefer the live setting due to the fact that it’s what is all about for us: it’s the practice in the real world. You know, having an album that you’re proud of to play, that you have already recorded in the studio and that it’s magically ready to be unveiled to the ears of our fans and in different cities and countries, I think it’s something to be lucky. We’ll be always the live setting because it’s related to that rush that you receive on stage when everything is going just right. Actually, it’s my favorite part of the day.

Keeping on with musical business’s aspect, I admit for being such a young duo, I have to affirm that I love your attitude and you have already gained an extensive live experience. Which life lessons do you have learned from it?

Jenna: I can tell you a lesson that I’ve learned from a very wise old man: “Everything taken longer than you think is going to take” [laughs]. That’s a wise lesson for a wise old man [laughs]. Being serious now, that, of course, it would be a great lesson. Everything like from the grand scheme of things until the early steps of creating a band like “We’ll, maybe we’ll get to play with someone cool within the next year” but in truth, it takes 3 years and everything takes longer than you thought. Throughout years of waiting impatiently, you have to give yourself time and be patient, stay always humble and just, yeah, stay hydrated and drink water (sometimes) [Laugh]. People think that going on tour and being in a band means just “Oh my God, that should be fun”, of course, it’s fun but there’s a lot of work from the second you wake up in the morning until the second you go back to sleep. We have extremely long days and people don’t understand that there’s a lot of work and it’s just not partying.

So, your previous studio full-length that dates back to 2017 was called “Feeling Disconnected”. How do you think that both you and Jenna have musically improved since then and maybe, which kind of differences can you denote?

Marcia: Hmm… I don’t know specifically anything that we have musically improved other than we had much more time and experience behind us. What do you think Jenna? I know that you’re kind of working on new guitar skills, right?

Jenna: Yeah, I really wanted to write acoustic stuff but in the last couple of years, I’ve learned to play power chords and I found myself really into that. When I was writing the songs, I ended up writing the same stuff and I wanted to step out of my comfort zone. Recently, I’ve downloaded and paid the subscription for an app for re-learn the basics for playing guitar and this helped me in improving my written skills and my guitar’s theoretical skills. So, it was what consciously I was doing in the couple of years.

So, I remember that last year you have published as s stand-alone single “Fade Away”. I was a bit surprised to not seeing it in your new album and secondly, why did you opt for this choice?

Marcia: It was a tough choice because when we went into the studio, we already had 15 songs including “Fade Away” and actually, our intent was not to record a full-length with all that amount of songs and on the other hand, we wanted to record an album with maximum 12 songs. Of course, it was really really hard to cut some songs, we struggled a lot and we went back and forth to correctly choose the songs. At the end of the day, I still don’t know if we did the right decision however it is what it is. Anyway, “Fade Away” is out there for anyone to listen to and hopefully, they do still even though it’s not on the album and I just hope that it doesn’t get buried and forgotten because I love that song.

Perhaps do you have decided to include it in the band’s live set list?

So, girls, this was my last question and now, it’s your space to say hi to your fans and our readers. I once again thank you for this nice interview, I’ve really really really enjoyed it.

Thank you so much, thank you for supporting us through this outlet and I hope to see everybody at our shows, that would be just great. We really appreciate your support and we love to play in Europe so much, it’s our favorite, favorite place to play and we’ll be back soon.