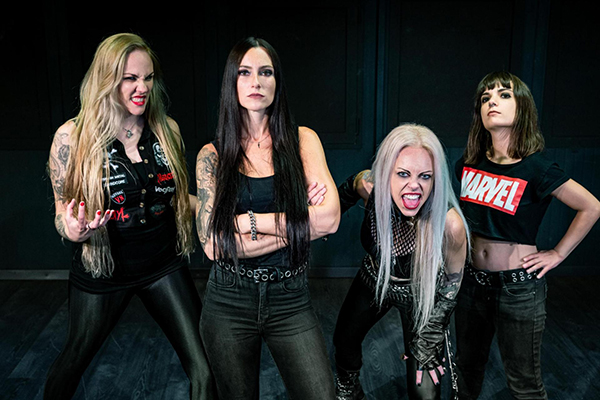 Brazil’s Nervosa is back with revenge. After the major line-up change that impacted the all-female thrash band by delocalizing the whole band in Europe, they are ready to unveil their new LP “Perpetual Chaos” via Napalm Records. As the new singer Diva Satanica affirms, this new release is special because it was even recorded during the pandemic without even knowing the other band members. Let’s learn more about this epic adventure through the words of the singer. Enjoy!

Hi Diva, welcome to Femme Metal Webzine.  How are you and how these precarious days are treating you?

Hi! All is fine, I’m glad to be here chatting with you!

On January 22nd, it has been released via Napalm Records, Nervosa fourth album “Perpetual Chaos”. From your point of view, what can you share about the general production process?

This is a very special album because we entered the studio without knowing each other at all. And, that was the very first time that we met. At the beginning, it was quite intense since we had to learn how to work and at the same time, to live together.

However, we instantly felt a connection between us due to our open-mindedness and that facilitated us. Of course, we worked very very hard before entering the studio on our writing process. Then, we spend one month the last summer at the Artesonao Studios in Malaga, in the South of the Spain, where we worked with producer Martin Furia.

Also, Nervosa worked together with him during the previous LP “Downfall of Mankind”. Well, it has been amazing because he helped us a lot with musical arrangements and the lyrics too. Also, he helped me out to find some new nuances and registers in my vocals and so far, it has been a great experience for me.

Also, “Perpetual Chaos” represents a sort of comeback for Nervosa. What did you learn throughout its writing process?

Yes, I’ve learned to work in a very different manner because I tend to be inflexible and when I enter the studio, I need to have everything clear and ready. But, this time, it was different. We mostly sent each other vocal, bass, drums and guitar lines. And in a second moment, we would discuss over the concept together.

It also happened that Prika had taken inspiration for a TV series or a movie and she consequently asked us to write about it without knowing the full parts. For me, it was interesting to work in a different manner because I’ve learned that I can do it and feeling that I don’t have the pressure to make it perfect, I felt released.

Even if “Perpetual Chaos” marks the beginning of a new era for Nervosa, I was curious to learn on what the lyrics specifically focus on?

Our lyrics mostly centers on the human behavior that through the years, it has created this chaos in our universe. Especially we focus on it in every aspect and we deal through themes of corruption, animal abuse, politics and war. You know, the human being has created a lot of amazing stuff but at the same time, from it, it derives a lot of negative impact.

Still, we try to have an attempt to have an approach where can deliver a good message too. We don’t want be passive in front of this, we want that people raise up and react. In the end, people should claim their rights and fight for a better world.

Personally speaking, in which way, the title album reflects the lyrics that can we find inside?

In “Perpetual Chaos”, our goal was to express the classical essence of Nervosa. So, we wanted to maintain our typical thrash metal features but naturally, with three new band members, each of them brings in their different musical influences. Due to this, there will be some different musical approaches: from black metal to death metal with a slight detour to progressive metal.

Essentially, the best thing of this album is that each song in “Perpetual Chaos” deal with a different musical genre. I’m sure there will a lot of listeners interested in our new release because who likes thrash and death metal will enjoy our most modern metal styles with enjoy our incursions in the most modern territories. Additionally, when you put all together these elements, the listeners will appreciate more by feeling much more comfortable with it.

In the previous question, you mentioned the fact that Nervosa went through a revolutionary line-up change. Out the original member Prika Amaral, everybody has left. Can you tell me how you girls got together and how it was the first approach with them? What was your final goal when you did join Nervosa?

As I told you before, we didn’t know each other before entering the studio. So, we just had some video calls and meetings for the writing process. Actually, that it wasn’t like a proper meeting and the first time we met each other, it was pretty awesome. It felt like four strangers in the same place with our masks.

However, with this pandemic, we weren’t so sure if we should have kissed and hugged each other or not. Personally, I was so unsure to the point that I started to think if I didn’t do it, they would have thought that I’m rude or something [laughs]. As soon I met them for the first time in the airport, it was like I did knew them from my entire life.

For us, it represents the start of a new family and it’s more than a band and more than a musical project. We want just to feel at ease with each other and we keep putting our love and effort in this Nervosa’s formation.

From what I’ve learned, Nervosa’s members are based in three different countries such as Brazil, Spain and Italy. How this impact on the general affairs of the band?

Actually, Prika has been planning to move to Europe soon because it will be easier for all of us to travel. However, we don’t know yet and it depends on the global situation. Besides, it will be quite interesting to see me, Eleni and Mia, so, three South European girls, dealing each other with their personal stuff. Even if, we have a common view in regards of living our life in a happy manner, we love to challenge and to take a challenge.

Out of “Perpetual Chaos”, of which it was introduced by the title-track and “Guided by Evil”. What insights can you share about these songs?

Well, “Guided by Evil” was our first single and video clip. Through it, we wanted all together to recreate and give commitment to this new band’s era. In this song, it’s also about the ones that want to achieve something without being worried about the others. So, having no empathy at all.

And, we, as a band, we just want to be far away from that kind of situations because it happened to us in our lives too and have a fresh start. Instead, about “Perpetual Chaos”, we just wanted to release a lyric video where our fans had the chance to learn our lyrics and get the concept that we are dealing with.

Probably, it can help our fans and listeners to familiarize with the main idea included in the album. It’s a powerful single and in its beginning, it recalls me of bands such as Slayer and Pantera. So, it will totally appeal the old school fans.

What can you tell me about your musical formation? How and when did you start to be interested into the music?

Well, my very first band ever was (and are) Bloodhunter. Everything that I know, I’ve learned it from them. With this band, I did my first recording session and I had my first experience on stage. Actually, I’ve been singing for 7 or 8 years and my very first time was back in 2012. During the first 2 or 3 years, I was searching the right vocal register on which I was feeling confident with.

Unfortunately, I wasn’t able to find out any dedicated teacher who would have taught me the growl technics. Additionally, I signed up for a music school but nobody was able to help me out. Of course, I quit and I was feeling really frustrated about it. Then, I found out some tutorial on YouTube and I remember myself, attending a lot of metal shows, staring in the front row just for study the singer’s facial expressions and everything that could how to learn better the right technique.

Even though, it took me a lot of time and practice to get to where I am now but I’m very proud of myself because I didn’t quit and I didn’t stop at all. I think, if you work really hard, you can really surprise yourself how far you can go and you dedicate all your love and effort in it.

What the future holds for Nervosa?

For the future, I hope many many good things. Hopefully, in this new year, with the introduction of the vaccine, we can play some live shows because we have already some confirmations and we been really looking to bring this album out on the road.

Unfortunately, we’re at the end of the interview. Please be free to say hi to your fans and our readers.

Thank you so much. It was a real pleasure to speak with you. Thank you so much for your support, for you amazing interview and for having us. I hope you’re all safe out there and you’re feeling good. Hopefully, soon we can all meet each other on a festival. Please take care and see you soon.