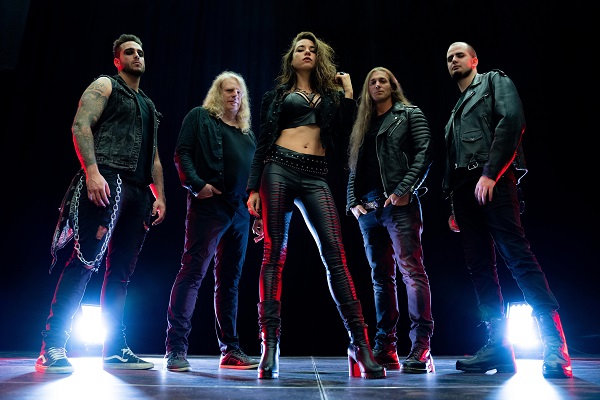 France’s Nightmare has to be considered one of the forerunners of the heavy metal genre in the country. Being active since 1981, the band resisted through rough times and several line-up changes. After the sudden stop between 1988 and 1999, the quintet is unstoppable. Switching to our present days, the Grenoble-based band has recently released its 11th album to date,“Aeternam”, via AFM Records. This new full-length has a double significance: reaffirming the musical hegemony and introduce the new talented singer Madie. On that regards, we’ve have enquired both the singer and the mastermind Yves Campion. Enjoy!

Hi Madie and Yves, welcome to Femme Metal Webzine. How are you and how is life treating you in these precarious days?

Madie and Yves: Thank you for asking, we are fine. Up to now, we are trying to survive through the fact that we still cannot perform live.

For those who are not familiar with Nightmare, would you like to tell us how did everything begin?

Yves: Well, that one it’s a long story because everything began back in the early 80s which was another world. Back in 1984, we have released our debut album “Waiting for the Twilight” which was followed by “Power of the Universe” in 1985. Both LPs were published by the iconic British label Ebony Records.

Unfortunately, that was a different band with a different line-up because the only person who survived through that line-up is me. A few years later, we have disbanded in 1988 to comeback in 1999 after a long hiatus. Actually, our rebirth brought the band where it is now with a second life and second career.

I’m also aware that Madie has joined the band back in 2019. How was your first approach with the band and which meaning does hold this experience for you?

Madie: Well, a year ago, I received a call from our drummer Niels announcing me that the former singer Maggy Luyten decides not to continue the adventure and to quit Nightmare.

However, a gig was scheduled for the end of July, and when I’ve received the call it was the beginning of April which gave a lot of time to learn “Dead Sun” in its entirety for the concert, as well as a few oldies too.

On October 2nd, Nightmare’s eleventh album “Aeternam” was released. What would you like to share about its general production? When did you start to collect the first ideas for it?

Yves: Well, due to the pandemic situation It wasn’t an easy task. Since it was recorded during the first lockdown in France, we have recorded the whole album at home, including Madie‘s vocals.

Then, we sent everything to be mixed and mastered by our producer Simone Mularoni at Domination Studios in Italy. For what concerns the first ideas, as every guitar player, I had some rough riffs stored and collected over the years but in general, the demoing process started in the fall of 2019.

Despite Nightmare‘s long career, “Aeternam” sounds so fresh and actual. Which is the secret formula for keeping up with the same attitude, after so much years?

Yves: Primarily, I would say that the joining of new members such as Niels on drums and Madie on vocals, brings always fresh blood. For the rest, I would say that it’s the experience. You know, after so many albums, you improve your songwriting by correcting your own mistakes that you have done in the past.

“Aeternal” successfully blends the good ol’ heavy metal sound with some interesting progg-y melody. How was possible to achieve the right equilibrium of these elements?

Yves: Surely, I would say that the different vocal range of Madie and her new approach that she brought in, it helped to have achieved the right equilibrium between power metal and those catchy melodies. If you think about it, since the 80s, it has always been one of the trademarks of Nightmare to combine dissimilar elements such as thrash-y or heavy metal with modern melodies.

Lyric-wise, would you like to introduce a little bit about the main thematic present on the album?

Madie: Well, the overall topics of the album is decomposition towards madness. Instead for what concerns the concept behind “Aeternam” straightly comes from the 80’s. In a way, I wanted to pay tribute to Nightmare‘s long career which also still keeps going on and with which we have all grown up or took the inspiration from.

As we know, the 80’s are culturally symbolized by some of the most celebrated horror films, which today they are considered classics . So, each song relates to one of these great horrific heroes such as Jason, Freddy, Alien, The Thing, Carrie and The Exorcist. In contrast, the other titles directly refer to the madness of humans as a whole, even to possession.

Out of “Aeternam”, three singles were released: the title track, “Lights On” and “Divine Nemesis”. What insight can you share about these songs?

Madie: As I mentioned before, each title has a specific reference. For example, “Aeternam” refers to the film “Flatliners” which deals with the experience of death and its experienced voluntary resuscitation. Then, “Divine Nemesis” refers to “Carrie” in her duality and lastly, “Lights On” to Freddy Krueger.

I think, the featured cover art deserves a special mention here. In your opinion, what does it portrait and how does it connect to the lyrics itself?

Yves: Considering that the whole album is very dark, we wanted something that could well-represent the mood of “Aeternam”. Naturally, something dark but also a little bit mystical. Also, I would say that this cover is much more black metal and it reminds me a lot of Behemoth. However, we have to thanks the artist who created it which is a French talented artist called Mickey from Mythrid Art.

What does the future hold for Nightmare and how did the pandemic impact your original plan?

Yves: Of course, for all bands out there, it has impacted all the planned live shows. Though, for us it meant to postpone for two times our full European tour together with Italy’s Rhapsody of Fire which is now planned for early 2022.

Then, we have a few festivals still planned in the summer of 2021 that were already postponed from 2020. We just cross our fingers that they will happen. More than else, several shows have to be planned but it looks like it will be for 2022.

So, Madie and Yves, we’re almost at the end and with this, please be free to say hi to your fans and our readers. Thank you so much for this interview.

Yves & Madie: Thanx a lot for the support! Before catching us live, give a listen to our new full-length “Aeternam”. We hope that you will like it as much as we do! Stay safe and hopefully see you soon on the road!