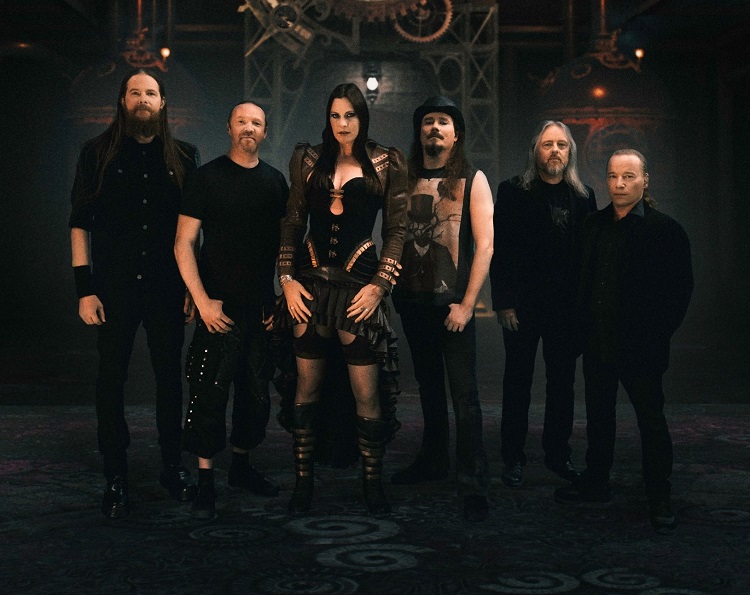 NIGHTWISH – An Interview with Tuomas Holopainen and Kai Hahto

Nightwish needs no introduction. Since the late 90s, the band has brought innovation to metal music. And they never stopped and continued to evolve by achieving one success after another.

They are currently the most reacted band on YouTube more than 5000 videos on their songs. We had the honor of meeting Tuomas Holopainen and Kai Hahto before their show at Knotfest in Turku and talking about their music, tours, and much more.

Hey guys, welcome to Femme Metal Webzine! How are you?

Tuomas: Pretty good, how about you? I am fine, thanks for asking!

Kai: Very nice! It is nice to be in Turku. It has been a while.

If I am not mistaken, is Knotfest your last show of the summer?

Tuomas: Last ride of the festivals.

How do you feel about it?

Tuomas: It is always a bit of a bittersweet feeling. However, it is nice to have a break and go back home. But then, you have been intensely living in this bubble for a few months. And it stops. At least for me is walking around the house for two days without doing anything.

Kai: It takes a lot to reach back to your daily routine.

In October is scheduled the South American tour and right after the European one is, am I right?

Tuomas: I think the European tour was put off 3-4 times.

Kai: At least three times. The original idea was to have it in May 2020. But then the pandemic hit, and everything changed accordingly.

We hope that everything stays normal.

Tuomas: It has to.

Kai: We hope too that it does not go back to the silliness of closing everything.

What should your fans expect from this tour?

Kai: It has been since May that we have been touring. Actually, when we hit the States. And, it has been great to play our new songs that were already out in 2020. The production is unlike the previous tour because it focused on our classics.

Tuomas: All you can do is to do your things, be yourself, and enjoy playing those two hours of music with your buddies on stage and hope that it resonates.

Do you have any songs you enjoy most playing live?

Tuomas: Since we did not play so often our new songs, it is always fun to play them. At the moment, I think the highlight of the setlist is “Tribal”.

Are you under pressure when you play the new songs?

Kai: Yeah, the excitement is more from the rest of the songs. It is great to play all the old stuff. But the new material is different because we did not play them so much, so it is still fresh and new.

And that is the reaction from your fans?

Tuomas: No matter what, it is an interaction. And the best part is our live shows. Indeed, when you see a fan in the audience that is going mental or some songs strike the fan(s), those are the moments that give you the energy to do the show. For example, this older couple was hugging each other with their eyes closed and waving throughout “Sleeping Sun”. It was a beautiful moment. However, it can happen that the audience in the front row yawns in the middle of the show. And it is a bit of a mood killer.

Your last full-length “Human:II:Nature” was released in 2020, what piece of information can you share about it?

Tuomas: It is a sequel to our previous album, “Endless Forms Most Beautiful”. And the upcoming one, which is scheduled for production in 2023, is the conclusive part of the trilogy.

Is the next album going to be released in 2023?

Tuomas: We are recording it in 2023. Subsequently, its release will happen during the early months of 2024.

Kai: Actually, the demos are ready. During our days off in the hotels, we have been literally busy listening to that material together. Then, we will approach the lyrical side with Tuomas and the vocals with Floor.

Tuomas: It is a privilege to finally have a lot of time on your hands to go through all the songs. And explore without hurry what we will do with those songs. As a matter of fact, we still have like ten months before the recording processes in the studio. So, at the same time, it is challenging and fun to brainstorm with the guys.

Most of the time in the music industry, you have a tight schedule. So, it is nice for the sake of art to have time, I think.

Kai: Yeah, because usually, Tuomas drops the demo one month before we go to the studio. Then we hit the studio for the recordings. This time, we already have the demo. And we can digest it and brainstorm what we can do with the songs and how they should sound.

Tuomas: Exactly! Deadlines can be very useful because, in this business, it is hard to let go when you are working so intensely with an album. And if you are a perfectionist, you strive to make it as perfect as possible.

Kai: It is highly motivating to know that we will release it in 2024. So, the recording will take place in July and August 2023. It is great to have concrete goals to hang on to.

What is your main musical inspiration at the moment?

Tuomas: Planet earth and the people on it.

Tuomas: Yeah, more or less. On the earlier Nightwish albums, the songs and the lyrics were a bit more personal. But, in the latest two releases, the theme has been a bit more universal.

So, some changes happened.

Tuomas: You have to change to keep the whole thing compelling. Or at least this is how I feel. I mean, ask AC/DC are still doing brilliantly with playing the same musical genre. With all the respect in the world for their career, I love exploring different types of music and ideas for my songs and lyrics.

You are the most reacted band on YouTube, what do you think about those videos?

Kai: It is good because some people have never heard about us. So, they probably will discover new music through that. I am not against it. It has been surprising and overwhelming that more than 5000 reaction videos are out there that feature our stuff.

Tuomas: It is an intriguing phenomenon. I discussed it with a good friend of mine, this summer. He told me whenever a new album or new song from his favorite band is released, he always watches the reaction video first. Then, a massive disagreement followed because I have nothing against the reaction videos, but I still think you should listen to the songs as intended. So, from the beginning to end without any interruptions. At some point, you can watch the reaction videos and see how people feel about it, how they put the song into pieces, and all that. But this is not what we mean. However, there are some of those that are incredibly throw-out. And they immediately seem to grasp the core of the songs and lyrics on their first listening.

Do you have any advice for young musicians who are starting their careers?

Tuomas: Do not start composing music unless the idea you cannot do it is unbearable.

Kai: Music is so personal that you should try to keep it as it is. And, it is not for money or success, you have to love it more because you can go somewhere with it. Then, if you love what you do, you are the luckiest man or woman in the world.

Tuomas: Music is what feelings sound. And that it’s the core, you have to keep it like that and have the
passion.

We are at the end of this interview, thank you for your time. Would you like to say something to your fans?

Tuomas & Kai: Thank you! See you at the shows!