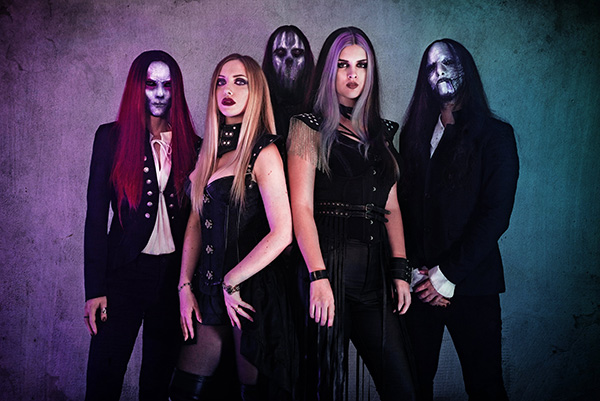 The musical revelation of the year is here, and it is the symphonic metal band Nocturna. During this year, the band released their debut, “Daughters of the Night,” (avalaible here) via Scarlet Records.

What lies behind the success of these newcomers? Well, this is something that the singers Rehn Stillnight and Grace Darkling can reply to.

Hi Rehn and Grace, welcome to Femme Metal Webzine. How are you? And how is treating you this period?

Rehn: Thanks to Femme Metal Webzine for having us here! I’m fine, thank you, enjoying my summer break from teaching in music schools.

Grace: Thank you for your invitation! I’m fine, just relaxing and enjoying the summer, going to concerts, having fun, and started preparing the final exams at my university.

For those who are not familiar with Nocturna, how did the band come together?

Grace: Nocturna was born in 2021 after we had met Federico Mondelli. Both me and Rehn have been collaborating for years. Back in the day, we sang in the same band. When we met him, we decided to create a new band that reflected our musical and visual tastes.

You can see and hear our influences in the sound or the artwork, the gothic, power, and dark elements. Federico helped us with his abilities, from the compositions to the album graphics, the tees, and the videos.

Recently, you released your debut LP, “Daughters of the Night,” via Scarlet Records. Which sort of insights can you share about its production?

Grace: We are very proud of it. We worked hard last year to conceive a product that reflects our tastes in the best ways. Due to the COVID-19 pandemic and the distance between each other, all the demos were home-recorded. Then, in August 2021, we visited Andrea Fusini’s studios to record the final tracks. We planned together with Filippo’s support from Scarlet Records.

The album is aptly named “Daughters of the Night.” Who are they?

Rehn: It’s us! Of course, it’s a more fictionalized version of us in which we tried to create characters for the songs. But some parts of the self-titled song depict our story. If you read the second verse in which I sing, it is about how we met and became close friends. Also, how our previous experiences before Nocturna never worked. So, we had to restart it from scratch together.

The singles “New Evil,” “The Sorrow Path,” and the title track are out now. Which insight can you share about these songs?

Grace: Personally, these three songs are my favorite ones from the album. “New Evil” and “Daughters of the Night” were indeed the right songs for introducing Nocturna to the world. The perfect summary of the concept of the band and the album. The third single, “The Sorrow Path,” it’s a modern power ballad with a deep and intimate meaning. With this song, we wanted to pave the way for the other side of Nocturna: we treat darkness as a theme not only in a conventional way but also by talking about personal feelings. In the video for “The Sorrow Path,” we wanted to recreate an intimate atmosphere.

In particular, the songs focus on your vocal duality and romantic, decadent, and Miltonian landscapes. Considering the pivotal vocal qualities, how challenging is finding the right balance between the vocal parts?

Rehn: Since the beginning, we have had a clear idea of how we would have the songs to sound. So, we divided the parts to deliver the concept rightly. It was always very natural, except for some parts where we switched roles during the song, so we had to push ourselves over our limits. For example, I use mostly my upper range and classical technique or mix, but in “Blood of Heaven,” I sing the lower harmonies while Grace sings the higher parts, and in the second verse, I use my modern chest voice.

I’m aware for both of you, Nocturna doesn’t represent your first experience as a musical performer. From what I know, Rehn is part of the international project Septum and Grace of Angelize. Which is the meaningful life lesson that you have learned throughout your career?

Rehn: I’d say that Nocturna is my first real experience as a performer. Septum is just a studio project, I recorded my vocal parts in my home studio, as I do with all my covers and demos, and nothing is out yet. With Nocturna, on the other hand, we went to a real studio to record the album together, had band meetings where we signed the physical albums and rehearsals, had two concerts, and filmed three official videos.

They’re very different experiences. The main life lesson I got is that there will always be people who attempt to bring you down. Especially for us females, with all those sexist comments that have nothing to do with our music. The only thing you should do is ignore them and prove them wrong with facts. I sometimes get angry reading some comments to which I answer them too. However, it’s just wasted time.

Grace: Yes, I was a member of different little bands from diverse genres. But nothing important. In past situations, I usually felt like I was the only one who cared about the bands I was part of. Unfortunately, dealing with someone who disagrees with your priorities and values, the situation can degenerate. I don’t mean to say that my way was the right one, but everyone has their priorities and way of thinking, and I respect everything.

Of course, it’s necessary to work with people on the same wavelength, like, for example, Rehn and Federico. Even though sometimes I thought I wasted months and years, these past experiences helped me to grow up and be ready for a project like Nocturna. It’s so beautiful to get on well with the other band members because they become a family for you.

Despite the pandemic, what is in the pipeline? And which are your plans?

Grace: We will release some exclusive content on YouTube. We are also planning some live concerts. And last but not least, we’ll start composing material for the second album soon. We really can’t wait!

So, Rehn and Grace, we are at the end. Please be free to say hi to your fans and listeners. Thank you so much for this interview.

Rehn: Thank you so much for spending your time reading our answers and to Femme Metal Webzine for chatting with us. It was a pleasure. But most importantly, thanks for your unbelievable support. We’re so happy to have each one of you in our community!

Grace: Thanks to Femme Metal Webzine for having us here. And thanks to all the listeners and fans! We are glad for your incredible support; I hope we will meet every one of you one day!