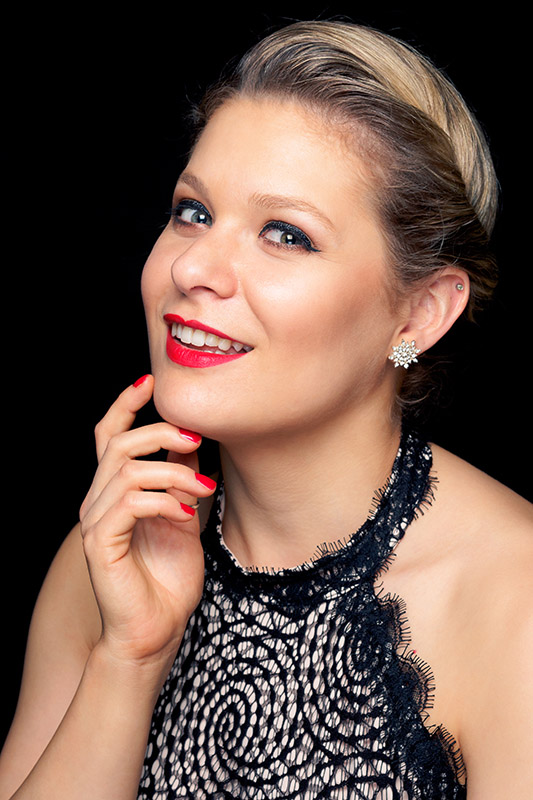 Three years after the release of its debut album, metal act Operose comes back in this 2020 with a brand new record, “Oceans Of Starlight“, that soon will see the daylight. We sized the day to talk to the beautiful Jennifer Coleman and Joe McGurk, in order to introduce you, dear readers, what Operose is about and what this band will offer you soon.

The symphonic and the progressive in an impressive metal shock, this is what I could find out about OPEROSE. How did the band come about and what are your biggest influences?

Joe: I was in between projects with prog band OPPOSING MOTION and solo work in late 2015 and had always wanted to create a symphonic metal project. Instead of looking for metal singers I thought it would be interesting to go all out and collaborate with a contemporary opera singer. I had already written the tracks and was proposing to build the whole album through the story of Eurydice as a heroine. I came across this fantastic singer in Jennifer and reached out to see if she would be interested in collaborating. After some communications with Jennifer, thankfully she was keen to come on board and the album just came to life. Kevin Deplanche from OPPOSING MOTION filled in on drums and we worked with Dennis Ward for the mixing and mastering. We subsequently wanted to build the outfit from a genre cross over into a fully fledged symphonic band so drafted in a new drummer and bass player for this latest album, as well as working on an improved sound with Markus Teske. We liked the concept idea of the debut so let the fans decide on Cleopatra as the heroine they wanted for the upcoming album. Our influences are varied from rock, metal, right the way through to classical.

Jennifer: Joe brought us together. He found me and said that he really liked my voice. He asked if I’d be up for collaborating. I get contacted like this every now and again, and very rarely say yes. I asked him to send some demos for his song ideas, and I really loved his stuff. He is so talented. I felt like I could really add something to the songs so I agreed to record the first album with him. We were really pleased with the feedback and reviews we were getting from the first album. But I think that this new album is even better – we’ve got better at working together. I think we’ve polished our sound and I hope that that come across in the music.

Where does it come from and what does the name OPEROSE mean?

Joe: The word itself is an unusual term for displaying a lot of work or effort but we liked it as it sounded a bit like a combination of Opera and Rose, which fitted with our concept. Once the logo was drafted we were sold on the name.

I could see that both Jennifer and Joe have always been deeply dedicated to various projects, how does this partnership work? We have a strong metal side for Joe and a deep classic structure for Jennifer, can you both say this is a perfect fusion?

Joe: I think that is what inspired us both about this project, the fact that there were two different genres that were very interesting when combined. Symphonic metal has always blended nicely with opera and we were keen to push this synergy.

Jennifer: We come from two very different sound worlds. That is why I think we create such a striking sound. Joe writes the songs and so a lot of what I have to do, is just to translate what is on paper and make it come alive. But I do like to add my own spin on things, and I do make a few suggestions to Joe about ideas I have for the music and lyrics.

Symphonic Metal has become such a large and wide genre, and of course classical music can take root in metal greatly, but OPEROSE maintains a much more refined line to the genre in a melodic and vocal structures compared to other names in the industry. Jennifer has a subtly angelic presence but easy to change if needed, why was she choosing a more refined identity and how was the public’s acceptance after 2017’s “Footprints in the Hourglass”?

Jennifer: Thank you for your kind words. I like being called refined. I think that comes from my classical training and working in an opera house. I have a Bachelors, Diploma and Masters degree in singing, and during my training, I was always trying to make the most beautiful sound I possibly could at all times. Saying that – I do also love to colour my voice and add sound effects and different vocal techniques. That’s why I love singing rock music. There is so much freedom with what we could create. I had to use a huge range in this new album – all of the harmonies are of my actual voice with no pitch correct or special effects. There is even a top E (above a top C) at the end of one of the songs. That was really fun to record. I didn’t realise how high it was until after I had recorded it.

By the way, I could see Jennifer’s fabulous performance at Belgium’s Got Talent. How was that?

Jennifer: It was quite surreal performing on Belgium’s got Talent. I have been living in Belgium for about a year so I’m still learning Flemish. I was more nervous about having to speak in Dutch for all of the interviews on camera than I was about the singing. They seemed really impressed that we had made an effort to learn the language in such a short time. It was a really fun experience to be involved in and it was wonderful to sing in the semi-finals. I am very grateful for the opportunity.

Speaking of “Footprints in the Hourglass”, this was a colossal debut, I mean, we can really say that this effort has become epic over long tracks of crystal clear sound, we even got a “monster” over eleven minutes long in “Empty Mirrors (Death of Eurydice)”, I’m impressed. Why choose long tracks on a first album?

Jennifer: You’ll have to ask Joe – that album was his creation. I feel like I had more of a say in the creative process of this new album. All I can say is that each of the songs tell a story and they go on a journey. I think they were so long because they needed to be in order to get the twists and turns of the theatricality of the music.

Joe: I think there was the Opera/story concept that needed a certain style of track to take the listener on the journey but also the fact that although this was a debut, we had both been involved in albums previously so it didn’t really feel like a debut.

2019 seems to have been a good year for the band, new additions with Steve Hauxwell and Mike Bridge in the line-up and a bombshell with the cover and title presentation of the new album “Oceans Of Starlight”. How is this new phase of the band going and the whole process involved in this new album?

Joe: Both Steve and Mike brought experience and impetus into the band, transforming the dynamics of the tracks in a very positive way. We worked similarly to the debut with the writing process but certainly found the recording process a lot easier second time round. Every brought their own stamp and ideas to performance and working with Markus Teske on the production was huge. Overall it came together better than we had envisaged.

What can we expect from “Oceans Of Starlight”? Will the delicious progressive elements be kept here or can we be surprised by something new?

Joe: I think the album is a lot more mature, accessible and with more layers and a bigger sound. For this reason I hope people will be pleasantly surprised. We thought a lot harder about the structures and delivery and there is hopefully something for everyone int his album.

Tours, shows, what are your plans for 2020 and where can we find OPEROSE going forward?

Joe: We have no dates to share at this moment in time but we are actively working on suitable dates and venues. We are hoping that this will be a great year.

I must admit that I’m looking forward to this new release, for those who had the opportunity to hear the first album OPEROSE left us mouth-watering releasing these little news. What would you like to say to the public and our readers?

Joe: Thank you for your time and we hope you like the album! Please follow us on Facebook and we hope to see you at a show in the near future.