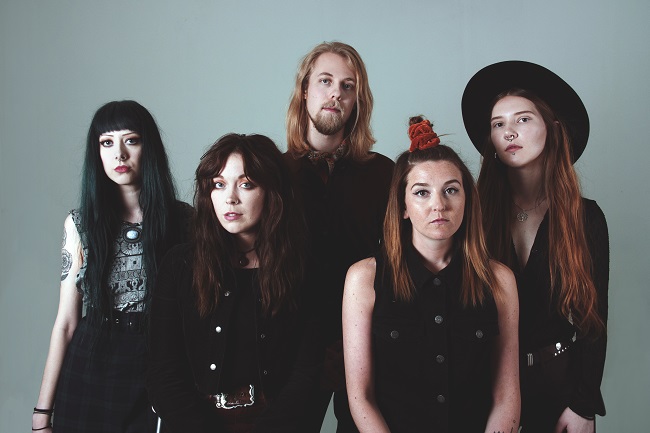 Gothenburg-based band Orkan is back with the second full-length “Livsgaranti”. With its prog-psych rock, the band boldly casts a light on important topics such as the complicated relationship between nature and humans. Indeed, this LP proves to be much more personal and imbued with political thematic. Let’s discover more about it together with the drummer (and singer) Moa-Linn and the guitarist (and vocalist) Josephine.

Hi Josefine and Moa-Linn, welcome to Femme Metal Webzine. How are you?

Good! We just had the release party for the record, and it was just the best night ever!! So we still are running on that release party-high.

For our readers, when and how did Orkan‘s musical journey start?

We met each other at the gymnasium in 2010. I, Kim, and Theresia soon became best friends and realized that we all played different instruments. So, we decided to form a band. Back then, Orkan still existed, and the music we played was very different from our current genre.

We started with some covers and later moved on to self-written songs when we all lived in Borås, a smaller town about an hour from Gothenburg. After a few years, we all decided to move to Gothenburg and change the name to Orkan. In Gothenburg, we found not only ourselves but also our guitarist Freddan. And that was when the real journey started for us.

The second LP “Livsgaranti” will be out on May 13th via Gamlestans Grammofonbolag. What insights can you share about its production?

Well, for sure, it has been a long process. In origin, we recorded the album almost three years ago. But the pandemic and other stuff got in the way. So, we are finally glad to share it. We recorded it all analog method, and in the vinyl process, the involvement of any computerized systems. The analog process contributed to the sound in many ways. However, one downside of this method is the difficulty in cutting and polishing the recordings to perfection. So, we had to play it how we wanted and sometimes just let the little mistakes be.

Few songs from “Livgaranti” are already known to the fans because you played them during the release gig of your previous album. How do these songs then develop throughout time?

Yes, some of the songs have been with us for a time. For example, the title track has been with us since 2013. The lyrics and the chords are still the same, but the feeling and genre of the song have changed completely. Another example is “Sussie”, which is also an old song that I and Moa-Linn wrote together in our first apartment back in 2012. Nothing happened with that song in many years. Then, a few years one of us played the riff when we were rehearsing, and we realized that its melody was too good to not be released. So, we brought “Sussie” back to life!

Orkan successfully conjugates the Swedish music movement of the 70s with a strong prog rock accent. How challenging is it to balance these two musical peculiarities without sounding repetitive?

We never think about what genre we should play. Usually, we write just the music we feel like writing at the moment. And when we take it to the band, it becomes Orkan. We probably have things that influence us unconsciously, but it is not a formulated goal. Probably, it is how it never gets repetitive which allows us to be influenced by and write and play what we feel like writing and playing.

On your Facebook page, you state that your music is “about the revenge of mother nature.” What is the meaning that lies behind that sentence?

“Livsgaranti” continues where the self-titled album left back in 2017. Which is the main element that bridges these two releases?

Mostly, it is the live feeling. Our goal is to avoid producing polished recordings which have lost that sense of genuine soul and playfulness. So, both albums sound like a straight live recording. But, we have improved a lot on the second album, probably thanks to the analog recording process. And the lyrics, both albums have a message to convey. Though it is more personal, it includes political subjects combined with personal experiences.

In March, the single “Urskog” introduced the album. Lyrically speaking, what can you share about the song?

“Urskog” tells the story of a foreign forest subjected to deforestation. Subsequently, human ingratitude leads the woodland to fall apart leaf by leaf. The silent scream from the trees cannot reach the human ear. Compared to other songs in our repertoire, this one is a sad and hopeless one. There is no rescue, no defense, just pure destruction.

Despite the pandemic, what is in the pipeline? Which is the thing that you look forward to? And which are your plans?

This year we’re doing gigs in Sweden, Norway, and Denmark. Then, we will record our next album, which we are excited about! But more than anything, we are eager to go on tour again, so we’re planning on putting together a European tour next summer.

So, Josefine and Moa-Linn, we are at the end. Please be free to say hi to your fans and listeners. Thank you so much for this interview.

We’re so grateful that this album is finally out, and that people are listening to it. Now, we just want to play live, and work on the next album! Hopefully, we’ll see some of you out there. All the best!