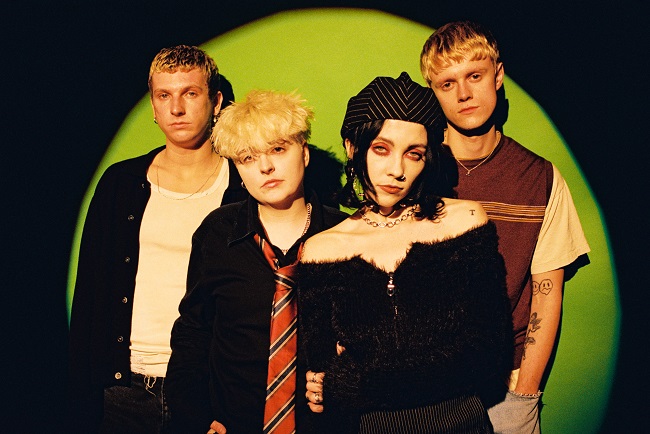 Well, let me be honest with all our readers here. Throughout the years that Femme Metal Webzine has been active, I never met an artist so open and direct over delicate thematic such mental healthy, sexuality, and gender equality. What also it’s so disarming is no matter how much years are passed by, nothing or little has changed in that regards. And, I’m glad that such artists as Heather Baron-Grace from the UK indie rock band Pale Waves, who never shy herself to speak (and sing) about it in the band’s second full-length “Who I Am” out now via Dirty Hit. Let’s read together what Heather had to say on this subject.

Hi Heather, welcome to Femme Metal Webzine, how are you and how and how life is treating you during these precarious days?

Thank you, thank you. I’m safe and well.

On the 12th February, Pale Waves’s second album “Who I Am” was released via Dirty Hit. Would mind to tell me about its general production?

So, we recorded it in two parts. During the first one which happened after our European tour and before the pandemic hit, we recorded 5 songs in LA. Since half of the band was afraid to be stuck in the US, they decided to fly back home. Given this, I finished it up together with the producer wearing masks and gloves. It was absolutely an unforgettable experience.

Per se, I really love both the album and its title album which I find really straightforward. Which is the meaning that lies behind?

Thank you, thank you. It’s more of a question to myself which is mostly about emotional growth as a person. It’s mostly related to who you are, who you want to be, what do you want leave in this world behind and which are your priorities in life. In the recent couple of years, I started to question my whole life as what I would like to continue to do and what can bring me happiness. Basically, it’s really a big question.

In the end, through this reflection what did you have figure out?

Well, what I figured out is that I need to put myself first, I need to be less harsh on myself, I need to look out for myself more. All this, I think it really worked out to improve a lot my love towards myself in these past two years. Because, at a certain point I’ve really neglected myself and that it’s not good.

According the press release, “Who I Am” also represents the band’s manifesto. What’s the main idea behind and why?

You know, this album discusses a lot of different themes and the idea behind it, it’s some sort of collective. Indeed, it addresses sexuality, society, body image, mental health. All these important themes coexist together to create this big statement of to be who want to be and don’t let anyone else tell you anything else. You are wonderful in the way you truly are and you are meant to be unique and not like anyone else. In conclusion, it’s the overall message regarding this album.

“Who I Am” was recorded in Los Angeles with the amazing producer Rick Costly. How was working with him and what did you learn throughout this process?

You know, it was great working with Rick. He’s such a well-acclaimed producer and it felt amazing that he wanted to record our LP together. Throughout this process, it made sound everything just so robust and sonically more powerful. Overall, his expertise and his sense in music really contributed in bring out a clearer guitar sound which generated in a more gritted sound.

Actually, we have learned a lot by observing him in which manner he records and which techniques he uses. Consequently, I feel like we have gained a lot of knowledge through this recording process. Even for me, it was so interesting to look at him while he was recording the guitars.

Out of “Who I Am?”, there were released 5 singles, but I would like to mention two of my favorite ones: “She’s My Religion” and “You Don’t Own Me”. Heather, lyrically speaking, what can you disclose about it?

So, with “She’s My Religion” I embrace my sexuality through my art. Even if, I’ve been always open about it, I never ever did it through my art because I needed time to grow and I needed to get the ability to write something so particular. In the end, I think that with “She’s My Religion” I’ve achieved that and it’s also about how to look someone entirely.

But, for doing so, you need to love what it’s imperfect about it as much the positive features. Mostly, it’s the whole message regarding the song. Eventually, if you really love someone, love them for who they truly are and everything what comes with them, including their baggage.

Then, “You Don’t Own Me” is a song for women and how it feels to be a woman in this world. Also, I’m talking about various experiences that I had an encounter with. And, as women I feel as we come a long way but we are still not there, we still linked to sexism that’s going on a daily basis. Due to this, we have to keep pushing, keep fighting and with “You Don’t Own Me” I just like to add my voice to that women.

Subsequently, my attempt is to represent women as much as I can. In this case, Pale Waves is my tiny little platform and through this I should speak about what is really true and important to me. And, sexism is one of them and women need equality.

Firstly, I want to thank to speak about that and as woman, I completely agree in your opinion. Then, I want to thank you for being so open in regards of mental health. Talking for experience, I know it takes a lot of courage and braveness to coming out on that topic. Lastly, I would like to ask you how did it feel to be so straightforward about these thematic?

You know, I’ve always found it quite easy to write about mental health. I really don’t mind opening up about that and more than everything, I feel like the people is struggling with it during their daily lives. And this happens because life can be difficult and hard. So, the more we talk about it openly, the more we will be normalised that. Then, people can come out with their issues and ask for help.

Sometimes people feel like they are probably judged and then, they get pushed out over to the edge and they don’t reach out for help. All this leads to a great amount of suffering and pain which on a worst-case scenario, can trigger an attempted suicide or an actual one. On that account, we need our society to be more open about it and then, people in an ideal situation can actually ask for help.

So, Heather, in a medium and long term, which are the next plans for Pale Waves?

Well, I think we’ll put out another EP or another full-length this year because it feels the right timing to keep on writing. Unfortunately, at the moment there isn’t anything else we can do, so, what’s left is composing new songs and trying to gather together with the band for our new material.

Indeed, there will more music this year and hopefully, it will follow early next year our tour. Actually, we want to keep the momentum going, we want to die or fade out. We don’t want our fans wait as long the last time for this upcoming second LP.

Sadly, we reached the end of our interview. I know that you have a crazy schedule going on and I thank you so much for you time. Now, it’s your space so feel free to say hi to both your fans and our readers.

No problems at all. I would love to say to all our Italian fans, we can’t wait to meet you. We really hope to meet you soon and thank you for all your love and support that you gave us over the years. We just hope to come there and play a show soon for you guys.