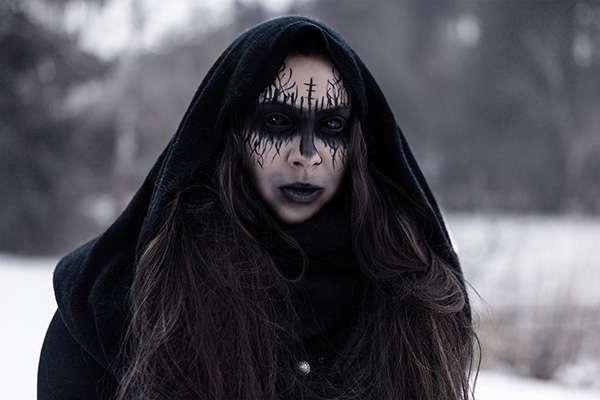 Secrecy most of the time is beneficial to deflect our attention and focus from important things, such as music. Actually, Perchta‘s identity is not of public domain but her artistic creation speaks for herself. The goal of this Austrian artist is to keep some ancient storie from the old Tyrolean traditions alive and chant. Her debut album “Ufång”, released back in April 2020 via Prophecy Productions, sees the breaking of the borders of the traditional black metal by involving folk instrumentations and pagan culture in her musical structure. Learn more through this interview. Enjoy!

Hello Perchta, welcome to Femme Metal Webzine, how are you and these precarious days are treating you?

Thank you for the invitation! Really good thank you. I’m focused on my pregnancy and the upcoming labor of my first child.

For the readers that are not still familiar with Perchta, would like to introduce how this project came about?

Perchta was founded in winter 2017 by me and my producer/bassist Fabio D’Amore. We already had a clear concept in mind regarding our first album and started recording demos in 2018.

As per the press release, Perchta‘s main goal is to “channel the deity’s essence to keep alive regional traditions that have been trivialized over time to fit modern conveniences”. In reality, how does this get contextualized and put in action?

We’re blessed to be surrounded by our beautiful inspiring nature and an old treasure of folklore mythology. In the end these are the two ingredients of our inspiration of Perchta. Both of them, nature and old sagas, shows us in our modern lives the important things: courage, respect of nature and other creatures and humility.

According to Tyroelean mythology, who’s Lady Perchta and which role had in the local mythology?

Perchta stands for Mother Earth‘s overwhelming elemental power and thus the primal force of the female. She is prominent in all Tyrolean myths as a life giver yet can also be a death-dealing goddess, so she has many faces, is not easy to grasp and frightening. Nevertheless she is revered as a treasure from the old days, a soothing memory and powerful remainder of mountain culture.

We decided to not restrict ourselves just to metal, which would have compromised our artistic freedom. Black metal is the framework for the project, but we don’t shy away from folk instruments such as the hammered dulcimer, and there’s also inspiration coming from pagan religions. Songwriting-wise, we tried to breathe something like a soul into each of the four elements, especially by means of the vocals.

The songwriting of the four main songs was mostly done simultaneously on two levels. Together we developed melodies spontaneously in the studio, that were mainly inspired by sounds of nature or emotions. With some songs the lyrics were written before composing, with others simultaneously. The lyrics of “Herest”, “Långs”, “Summa” and “Winta” were done in a single night and have been spontaneously sung by emotional interpretation during the mastering process.

Diversity and changing dynamics were crucial to every song because each element has its own cycle. For example in “Wåssa”, I explained the journey from a raindrop through a river, floating at the end into a lake/ocean. This journey could also be seen in the mythology of the triple goddess mother, maiden and crone. Birth, live and death.

Also the album is characterized by an “Intro” and “Outro”, should we consider “Ufång” a concept album?

“Ufång” focuses on recurring phases of live in nature and is written as a musical cyclic concept of the album. Birth-live-death and rebirth as part of every element and every human.

The following question is mostly a curiosity for language geeks like me, mostly which is the difference between the current Austrian spoken nowadays and the Tyrolean dialect that you use in the songs?

The main language in Austria is a kind of German. But there are a lots of different dialects in every corner of our country. Especially in some deep mountain valleys, witch dialect seems to have nothing to do with German at all, only spoken in two or three villages and for example it’s not understandable for someone who comes from the capital city Vienna. Perchta use a mixed form of the Tyrolean areas between Kitzbühl and Innsbruck. The Character of these Dialect is his soft, harmonized Melody.

Out of “Ufång”, there were two singles, namely “Åtem” and “Ernd”, which specific info would you like to share about these songs?

Actually, “Åtem” was our first song finished on the album and so, I feel a real strong emotional bound to it. The focus was to catch the nature of the element how it lives in every human body. So the Breath, specifically the in- and exhale noises were an important part of the song.

“Erdn” focused on the earth where we came from and were we have to go after death. Like ashes to ashes, dust to dust. It’s sound-wise the most aggressive one on the album. I would like to transport the message, that the earth is able to fight back, if humans are not treating her right.

Perchta is not only a studio project but also “a functional live formation”. Which are the challenges of bringing on stage such a visual and lyrical idea?

We already created a full concept of stage performance. But there will be no choreography or planned showacts. I think the visualize of Perchta in her full folklore gown, the old instruments like hammered dulcimer and devil stick, the music itself framed with an atmospheric lightshow, should be enough to transport our messages.

In normal times, this question doesn’t procure any embarrassment but I feel anyway obliged to ask you if you had any plans to promote live “Ufång” and instead, how your plans changed?

Due to the cancellation of many events, the CD release party and our simultaneous live debut on the Dark Easter Metal Meeting 2020 has been postponed to the upcoming year. Very disappointing, because everything has been planned so neatly, but it was inevitable under the circumstances.

But there is hope for 2021 and another confirmation for the Vienna Metal Meeting next year on 22th of May. For this year, we decide to promote “Ufång” via our social media and create two more videos. The lyric video of “Gluat” was released on 2nd July 2020 and another big production will come in October 2020 for “Wåssa”.

So, Perchta, we’re almost at the end and with this please be free to say hi to your fans and your readers. Thank you so much for this interview.

I’m truly overwhelmed and grateful of the many positive reactions for Perchta the past year. We’re glad to see, that many people can share our joy regarding this debut album and will be taking part in this unusual musical journey. Taking care of oneself and not overloading the system is now more important than ever.

After the crisis has passed it will be particularly important to support artists, hosts and locations. So hopefully we’ll see us in Munich or Vienna! Thank you for these interesting questions!