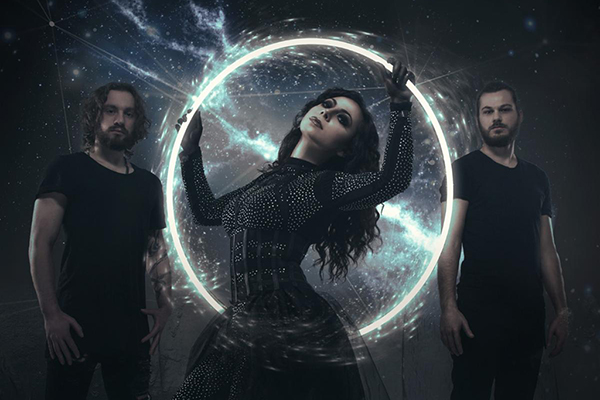 After 2017’s independent debut “Wasteland”, the Dutch symphonic metal band Phantom Elite is back with a new full-length called “Titanium”. In this new album, the band has imbued all its past experiences in these straightforward lyrics. Indeed, through this album, the band wants to show that after the storm comes the sun. Let’s learn more with the German based singer Marina La Torraca about this new release and the record deal with Italy’s Frontiers Records SRL.

Hi Marina, welcome to Femme Metal Webzine. How are you and how these precarious days we treating you?

I’m doing good, I’m doing good. Lately, there’s a lot to do because of our upcoming album release but so far, it’s treating us good.

First of all, for our readers that aren’t familiar with Phantom Elite, would you like to share with us how the band got together?

Actually, everything started long way ago than I remember. When I think about it, seriously has it been so long? [laughs]. Anyway, everything started 6 years ago when I contacted After Forever‘s Sander Gommans because I was searching a new band. At the time, I did finish my studies, which, by the way, aren’t connected with music.

Eventually, I felt the need to go back to do what I’ve always done. So, he was looking someone for playing his HDK material. Indeed, he has proposed me and I thought it was great. We started to search for the musicians and I thought it would be amazing to work with him. Essentially, that’s how Phantom Elite born. As a matter of fact, we started as a HDK live band but as soon as we started rehearsing, we begin to compose music too. We thought to conciliate both band commitments. What an interesting fact is that the band’s name originates from a HDK song.

On January 22nd, the second album “Titanium” will be released. What can you share about the overall production process?

In 2019, we started writing again our material because we faced a lot of internal line-up changes. Well, if people haven’t noticed I’m the sole survivor from the original Phantom Elite’s line up [laughs]. It looks like I scare people away but it’s not my fault and I swear that the old members had either their reason to go away or to be kicked out of the band [laughs]. Seriously, a lot of uncool things happened and we’re thinking to not keep up with it anymore.

However, since me and the other two remaining members, we get along, we decided to not give up. After our decision, we bumped into all the sorts of financial issues that can happen when you invest in a band. Consider that recording, producing and independently distribute your release is a lot of work too and we weren’t sure at all if we would have successfully pulled that off.

Luckily, Frontiers Music SRL’s offer came and it couldn’t be a better time. They offered a deal in which they to commit themselves to help us a little bit financially and with the work. So, we wrote the album’s material in just 2 months and its title album has a specific connection to all the lyrics. Mainly, all the featured songs are about not giving up and being unbreakable. It’s simply a fierce, fierce album.

During our interview, we have already mentioned the deal with Italy’s Frontiers Music SRL. How did this partnership come about? In the previous question, you referred about the timing of how Frontiers Music SRL came in, so, how was the first approach with it?

As a matter of fact, Frontiers Music SRL’s label manager Mario De Riso approached Sander Gommans asking him if we would be interested in having a multi-deal album with them. It was a fantastic opportunity and as every contract requires, naturally, there was a lot of negotiation.

However, in the end, it successfully worked out. Although, they are mostly known to be an established label in musical genres such as hard rock and AOR, lately they are switching their focus on more modern newcomers that can offer some variety to their label. Indeed, that’s the nice thing about it and they are so excited for this project.

In the second question, you pointed out to some band’s issue that you had to face. Despite all, what has pushed Phantom Elite to not give up?

Yes, absolutely there were many. You know, one of the reasons to not stopping the entire project is finding the right people on which rely and support each other. Of course, we do fight because we some big creative personalities and sometimes, we clash, it’s normal. In the end, we have the same goal and we are on the same page. So, we really wanted that so much.

Additionally, the reasons why we wanted to go further with Phantom Elite are simply that the other two band members are dedicated musicians that aren’t doing this for the chicks or the money. Yeah, some money is always good [laughs]. Seriously speaking now, we’re all doing it all for the love for music and art. We’re not like your everyday commercial band. We are going a bit arts-y and we taking a lot of risks, in terms of commerciality, it might pay off or it might not. But we don’t care. That’s basically it [laughs].

If we take in exam 2018’s debut album “Wasteland” together with the upcoming release “Titanium”, which are the main differences that can you detect between them?

I think, one of the biggest differences between them is the sound and the production. Sound wise speaking, we have pushed the level because it’s industry top-notch and for the time being, we have decided to invest a little bit more on this. Secondly, it’s the line-up.

Undoubtedly, you can notice that’s still the same band, there’s a connection there but it would be “Wasteland” 2.0. There’s definitely an evolution (from “Wasteland” to “Titanium”) and it represents the next step which is heavier and more modern. We felt it was relevant to achieve.

Regardless of being the involuntary founder of the band, nowadays, which roles do play both Sander Gommans and Amanda Somerville in Phantom Elite?

Until “Wasteland”, Sander was involved as a band member behind the scenes. So, he’s the author of the 50% of the lyrics that have composed together. In the end, he co-wrote a lot. Now, since the born of the baby twins and their child, this amazing event in his life forced him to take a step back from writing and from being actively involved in the band. Notwithstanding this, it’s not something bad because the two new members stepped in right after.

Writing wise, this time we’re directly engaged in composing the lyrics. Even though, he was involved in the production of the songs and his role can be seen as musical/executive producer. Even if, Amanda was never involved from the beginning of our musical adventure, this time, for “Titanium”, she collaborated as a vocal coach and with the entire musical production.

Out of “Titanium”, two singles were released: “Diamonds and Dark” and “The Race”. What insights can you share about these songs?

The first single was actually inspired by a book that I was reading at the time, Jack Kerouac’s “The Dharma Bums”. Also, I was having a short holiday in a forest and that’s in that situation, “Diamond and Dark” came to my mind. The words “diamond” and “dark” represent the sky at night. This lyric deals with introspection and searching yourself. I wouldn’t to be too much literal here, but it’s really about what the chorus is [laughs].

Weirdly enough, these two singles are a little bit out of the main lyrical theme. Of course, it’s not a self-help album but there’s a lot of personal lyrics that are about taking the wheels of your life, going for it, fighting and achieving it. However, “Diamonds and Dark” and “The Race”, they have a storytelling approach. They are a sort of a spin-off. If we use a comparison with “Star Wars”, these two songs wouldn’t be the main Luke Skywalker/Darth Vader’s plot.

Though, if we analyze in detail the second single “The Race”, it’s related to the way we live nowadays. You know, with all these technologies and this overwhelming information that’s continuously available. Everyone might feel and I do feel, that I’m spinning like in a hamster’s wheel running towards an inexistent finish line.

So, Marina, I know that recently you have inaugurated your Patreon channel. I was wondering to ask you, what would you like to propose in there?

Well, a proposal like that has no expiration date but on the other side, it takes time to gain a stable number of fans from which you can obtain some concrete financial support. Currently, I’m busy to prepare some exclusive material such covers and recordings. We’ll see where it leads…

What does the future hold for Phantom Elite?

Well, that’s a hard one. Of course, we would like to promote our release properly by touring but it looks like that in the short time, it won’t happen soon. Naturally, we still have hope that it will happen soon.

So, Marina, unfortunately we are at the end of the interview. Please be free to say hi to your fans and our readers.