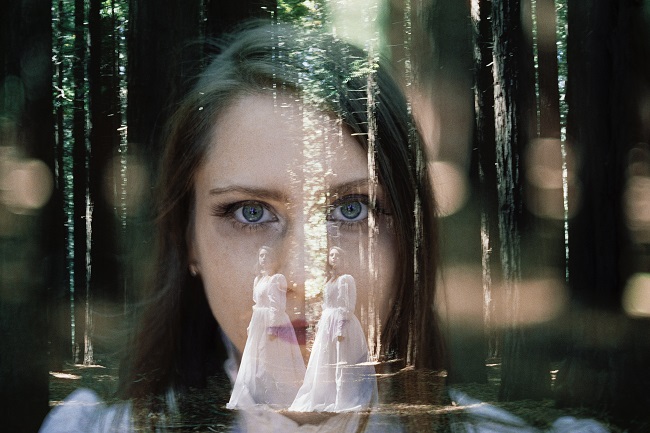 PLUM GREEN – An Interview with the artist

There’s something intelligible about this Australian artist. With simply her voice and poetical allure, ambient folk doom artist Plum Green is able to mesmerize and literally transport you in another universe.

Even though, “Somnambulistic” is her third album, she’s getting much more (deserved) recognition through her new label Nefarious Industries. Let’s take some time and learn more about her art.

Hi Plum, welcome to Femme Metal Webzine. How are you? And, how are these precarious days treating you?

Thank you, I’m doing well despite being in lock down now for 3 months. I’m really missing having contact with people. I live right next to a huge forest, so I feel pretty fortunate so have access to that though.

Even though you’ve been active since 2012, for me and many of us readers, you impetuously come as a thunder in a serene light blue sky. When did music cross your path?

That’s a lovely thing to say. I went through a stage of not wanting to do music anymore and only after our 2-month tour of Europe I decided that I couldn’t just walk away from writing and performing as easily as I thought I could.

All the anxiety, rejection, and self-loathing doesn’t begin to compare to the void of denying yourself the access to creating music, so I decided to write “Somnambulistic”, and I don’t regret my decision. I think it’s the best music I have recorded so far.

On Sept 17th, Nefarious Industries has released your new album “Somnambulistic” . What insight can you offer about its general production?

I wrote the songs on the album with very simple acoustic guitar. I owe a lot to my guitarist, engineer, and co-producer Daniel Cross for making the finished album sound the way that it does. Even the skeleton version of the album before the added other instrumentation sounds spooky and delicious. He added a lot of guitar atmospherics and his bowed electric guitar which people often mistake for a cello. From there we added field recordings such as thunder and lightning that we recorded at the doorstep of the studio.

We recorded cicadas calling out to each other in the summer evenings, rivers, wind blowing through the trees at a country graveyard and all sorts of other secret noises that you can only catch if you listen carefully. There are lots of layers of sound and even a little bit of genuine screaming by me at 3am in the morning to get the right sound.

“Somnambulistic” as a title album is quite strong one but what is the main lyrical concept about it?

Generally, lullabies are for escapism. I wanted to create something darker. I intentionally wrote a collection of lullabies specifically for adults that wouldn’t be unrealistically optimistic yet designed to be comforting and reassuring. The songs and lyrics are based on dreams that I’ve had and flow on from each other in one overarching dream.

I believe we have dreams to help us process our waking experiences. Writing the album was important for me in processing pain. Ultimately, I wanted to write something that was healing for others too, like a giant protection spell.

What literally has overwhelmed me is the musical texture of your songs, which they also feature classical strings. How much challenging is to successfully amalgamate your instruments with the classical ones?

He treated the album like a piece of art and used the stringed instrumentation to decorate the music with. The finished product is in part to his skills in that area, otherwise I think it might have sounded separate and less incorporated.

You worked together your partner-in-crime Daniel Cross. How he adjuvated and helped you to shape “Somnambulistic”?

Daniel played a huge part in shaping the album from the beginning. After I had finished writing the demos with my guitar, I played them all to him and we had a conversation about how we wanted each finished song to sound and fit into the concept of the album. We made some scratch recordings and he shut himself in his studio at night with candles burning and spent hours listening to them and experimenting with atmospherics and bowed electric guitar.

A lot of his experimentation became part of the final album. He recorded most of the album, mixed and edited the entire thing. He was extremely diligent in making sure that I was involved in the decision-making process and never finished a song without asking for input, which was greatly appreciated too. It felt like a very successful, peaceful, and easy process making this album with him. There was very little we disagreed on.

As promo video singles, we have the songs “White Kitten” and “People of the Snow”. In which manner, the visual have a straight connection with the lyrical concept of the songs?

I was thinking a lot about internet surveillance, media, and censorship when I wrote “White Kitten”. In the video for “White Kitten” my friend is taking away childish or uninteresting things from me and replacing them with better, prettier things. There’s a lot of tension and uncertainty as to what I’m getting myself into. I think the video is very subtle and wouldn’t necessarily translate like this to everyone who sees it.

The song itself is about vulnerability and all facets of exploration and growing and the things we must leave behind in exchange. There’s a lot that can be read into it, which makes the video like poetry itself. I think it was cleverly done. A close friend once said to me that if there was an afterlife, you would travel there while collecting all the sorrow you’ve held onto.

And then discard it across the sky behind you. All scores would be settled, every argument forgotten. I was thinking about this when I wrote ‘People of The Snow’. The video is a fleeting suggestion towards what it looks and feels like to travel to death or to catch a glimpse of it.

Despite the pandemic, what is it in the pipeline? Which is the thing that you are more looking forward? And which are your next plans?

We’re booked to headline the goth festival Gathering Shadows in my hometown Wellington, Aotearoa for the last week of January 2022. Getting over there might be tricky, but if we succeed, we’ll also try and book a small tour. We also really want to be in Europe touring this time next year, which apparently might be possible. We’ll do everything we can to make it happen.

After Europe, we’d love to tour America and maybe some places in Asia too. We were meant to be touring all of these places before COVID so we’re more than ready. We just must wait for better times. While we’re waiting, we’re recording a new EP called “Gogic”.

So, Plum, we’re almost at the end. Please be free to say hi to your fans and listeners. Thank you so much for this interview.

Thank you so much