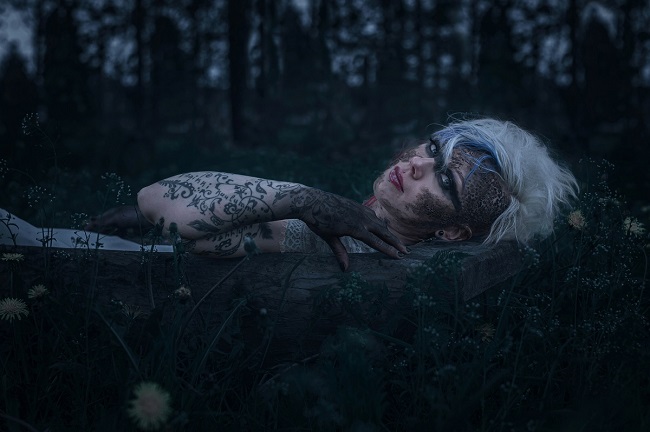 Finnish singer/songwriter Rioghan is a mysterious soul who has enchanted with us with her debut EP “Blackened Sky” released a couple of months ago via Inverse Records. With her influences deeply rooted in both gothic and progressive metal scenes, the songstress is here to stay. In this interview with the Artist, we learn more about her musical project and her next plans. Enjoy!

Hi Rioghan, welcome to Femme Metal Webzine. How are you and how life is treating you in these precarious days?

Hi Miriam and thank you for asking it. Despite the overall situation in the world, things are quite fine here in Finland.

For our readers that are not familiar with you, would you mind introducing us how your musical journey started?

Actually, performing as Rioghan represents the first visible (and audible) step of this long and difficult journey. Before coming through with this, there was a long road of hits and misses, self searching, and piano and singing lessons.

On 10th March, it will be released your début EP “Blackened Sky” via Inverse Records. What would you like to share about its general production? When did you start to collect the first ideas for it?

Since we have used some older poems from my archives, the lyrical concept are probably 5 years old. But, the musical part saw the light of day in 2018 when I got the courage to contact a few musicians for songwriting. Since we only worked together during the weekends and when our busy work schedules allowed that, we took one year to record all the songs.

Back in November, it was released the official video of the lead-in single “Hollowness”. Why did you opt for this song and what is the hollowness that you refer in the song?

Indeed, this was one of the hardest song to record. Personally speaking, it felt like a suitable introduction to our musical project. It’s a gentle introductory single that allowed us to leave a few surprises for later too. I wanted to make a video for this song to back up the story I had in mind while writing it.

However, I noticed that everyone had different interpretations so I wanted to pushed to have mine featured in the video. Of course, hollowness can be have several and contrasting view. Nevertheless, I refer to hollowness when there’s a constant yearning of unattainable things. You know, like you feel strangely hollow after you have just achieved something. And yet, you are already thinking about the next step and wanting more.

Instead, later in December, the second single “Enough” followed with a lyric video. What insights can you disclose about this one?

Actually, during the whole process I was nervous about the lyric, about the style of the song, about performing the vocals. Well, about pretty much EVERYTHING, but after all it turned out great! And, its feedback has been great too.

In fact, the lyric video for “Enough” proved to be a right choice because this song is really important to me. And, with the video, it rose to whole new lengths. My end goal was to let the listener experiencing that.

In its total, your EP “Blackened Sky” sums up to 4 songs which, including the singles, are “Wither” and “Corrupt”. Are these 4 songs connected with each other and if not, which are the main lyrical thematic?

As a matter of fact, these songs don’t have any connection to each other. Though, now that I think about it and listening to them as a whole, there might be a common theme which deals with different kinds of losses.

For what I saw, also the visuals play an important part in your music. The aesthetics of your photos and videos are so well-detailed that look so realistic. Given that, in which way all these features are linked to the main lyrical themes proposed in the songs?

I have always liked visuals and I tend to like something that can a little controversial. Probably, my interest in gothic and alternative cultures is what led me to discover different aesthetics. In essence, I had some interesting ideas to try out which deserved to be show.

What the future holds for you? Which are your next plans?

Well, we’re working on new songs. And, then we will collaborate with some external partners for the songwriting. I’m really looking forward. Also, this year will be busy with the production of our full-length. And, we are looking forward to release it during spring 2022. Since the live shows have been on hold in almost everywhere, I have decided to focus my energy on creating new material.

So, Rioghan, we’re almost at the end. Please be free to say hi to your fans and your readers. Thank you so much for this interview.

Thank you so much for everyone who has listened to my first songs, and a super special thanks for your feedback. Indeed, I’m surprised about the interest this release has received. Indeed, my main goal was to “just release it somehow maybe someone will find comfort from this ”.

Then, many of you have nicely welcomed my EP. Thank you for being there, more things will come! And thank you Miriam for this interview, it was a pleasure!