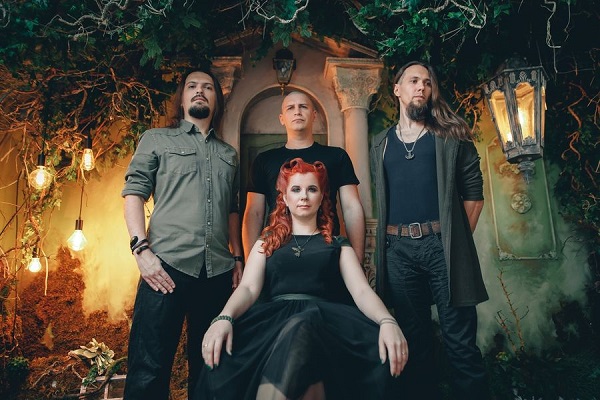 After a long run of three introductory singles, hailing from Krasnodar, Russia, symphonic metal quartet Save My Name is ready to unveil the world its debut album “Дойти до трёх” released last year via Metalism Records. In order to learn more about the band and its interesting debut, we got in toiuch with the singer Alexia Wayne. Enjoy!

Hi Alexia, welcome to Femme Metal Webzine. How are you and how life is treating you in these strange days?

Hi, It’s really a very strange time, but fortunately I have avoided by all the hardships of 2020.

First, for who’s not familiar with Save My Name, would you like to tell us how the band came together?

By chance and dictates of fate. In fact, we all have known each other from different music bands and other collaborative work for a long time. Therefore, at the time when the idea of Save My Name was born, Alexey Pushkin had already had a clear picture of each participants’ skills and capabilities.

I was the last one who joined the band, but I didn’t doubt for a second that I would be able to catch the general spirit and transmit the whole main message of the material by my voice.

Back in June 2020, it was released via Metalism Records, Save My Name‘s debut album “Дойти до трёх/Count to Three”. What would you like to share about its general production? When did you start to collect the first ideas for it?

The work for the album started as soon as we started rehearsing with the full band. At that time, a few songs were almost ready. But that was not enough for the album and we started working on a new material immediately.

Each musical theme and each fragment of the lyrics were carefully evaluated and listened to many times. The songwriting process was not always difficult but sometimes the final understanding of the composition came only after several months of rehearsals.

I can tell you, for example, that the lyrics to “Буря” were rewritten twice. I can’t even say how many times the drums and guitars were corrected. On the other side, “Дойти До Трёх”, in my opinion, appeared literally in a few days and at once we had a ready structure.

Most of the band members were part of the Russian Celtic Folk metal band Fferyllt. Musically speaking, how their experience influenced on the band?

I think the precious experience is the most important thing which the guys can bring into Save My Name from any projects they participated in. For experience, I refer to, for example, to playing instruments, skills in sound engineering and using technical equipment.

Also understanding of many musical details like work in a team, stage behavior, and hard-working habit and so on. If we speak specifically about the musical style and features of both bands, then Save My Name does not intersect with the musical style of Fferyllt.

Before the release of “Дойти до трёх/Count to Three”, there were released two singles: “Танцы На Костях /Dances on the Bones” and “Шаг За Шагом / Step by Step”. What can you tell me about these songs and why did choose these ones?

Every song has its own time, and these songs were bound to become singles!

“We are blind to the troubles of our close ones; the career ladder exists even within friendship; we are indifferent to what’s going on around us, etc.”

So, starting with our first single “Шаг За Шагом / Step by Step” which is about the importance of staying human in our troubled times. In fact the song’s melancholy atmosphere is not as simple as it seems and all the feelings mentioned in the quote, they are transformed into a desperate cry of the soul in the song’s culmination. For this reason, “Step by Step” deserves its own place in the singles and its own music video!

Instead, “Танцы На Костях /Dances on the Bones” represents the exact opposite to our previous single because we have a tough satire on human indifference and unwillingness to make history with our own hands. After all, when you do not want to solve anything and change life around you, you can only dance. Here’s a little fragment of the lyric: “No one is to blame for the misfortune of the insane”.

I really like the game video created by Roman Frolov with the song “Dream”. How this collaboration born?

Like any great collaboration, it did happened by accident. So, we have previously seen some of Roman‘s videos on YouTube and we liked them a lot. So, when our label boss Alex Pastukhov offered us to collaborate with him, we gladly agreed tp work together on the single “Dream”. Well, judging by the number of views and comments we were not mistaken.

Additionally, it followed the release of its video. I really love your dress in the video. How your dress connects to the overall atmosphere of the song?

Actually, we have released two videos and in fact, the dresses were matched to the concept of the song and the expected video. In our video for our first single “Save My Name” is about a sad and bright memory of people who for various reasons, have lost a touch with you. Here, the colors black and green were symbolically chosen in order to represent a contrast. So, the green colors symbolize bright elements that will always decorate our memories while the black symbolizes the gloom and austerity.

Instead, the butterfly dress in the video of “Step by Step” depicts the transformation that is happening throughout the videoclip which is the most humanistic and precious thing we should preserve in everyone. Despite the fact that, our darkest part of us will be always stronger (alas, it is!), we will have to face our fears and hopefully, win.

What the future holds for Save My Name and how the pandemic impacted your original plan?

Unfortunately, the pandemic cancelled several major festivals and some of our planned concerts both in spring and summer 2020. However, we had the opportunity to create new songs that we hope to present next year and also, more time to promote our release on the social networks.

Actually, our current plan isn’t to rush the process but instead, to work hard for reaching new heights. Additionally, we have interesting ideas for new music videos and several new songs. In the end, we really hope to start the second album recording in 2021.

So, Alexia, we’re almost at the end and with this please be free to say hi to your fans and your readers.

First of all, I wish to everyone to be safe and healthy. Then, I really want to believe that I will meet many of our listeners over the world within the next couple of years. And for doing that, we need that everybody will be healthy and keep listening to good music. Thank you to following us even in this period of self-isolation, I hug each of you. Just, open your hearts to music and Save My Name. Lastly, special thanks to Femme Metal Webzine for the great interview, it was an incredible pleasure to answer your questions!