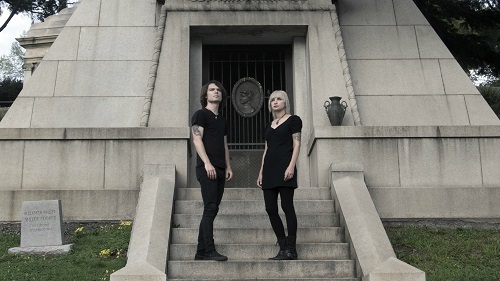 Even though Silence in the Snow might appear a new name in the dark, ethereal, shoegaze panorama, drummer Trevor DeSchryver isn’t at all a newbie. Mostly known for being one of the founding members of the legendary American funeral doom metal Lycus, here we are introducing his new project along with the guitarist/vocalist Cyn. Fresh of their new signing deal with Prophecy Productions, the duo have recently released their second full-length “Levitation Chamber” and re-released their début “Break in the Skin”, so what’s the best occasion for a nice chat with Cyn? Enjoy it!

First of all, Cyn, welcome to Femme Metal Webzine. How are you and how are these days treating you?

Thank you! I’ve been preparing for the record release and tour of the USA, so it’s been a busy but exciting time!

Secondly, would you mind introducing Silence in the Snow to our readers? In particular, I’m referring to how this musical projected started…

I started the band as an outlet for a more interior expression and focus for songwriting. As different ideas for the first record “Break in the Skin” emerged, it became centered around minimalistic beats, spacious soundscapes, and intimate reflections. Originally, I was using a drum machine, but Trevor connected with me in January of 2017 and the vision was expanded to include live drums. The music began evolving as a natural progression of our musical chemistry and individual backgrounds. In preparation for recording “Levitation Chamber”, we began collaborating with Nick Bassett on synth. The band is a duo with me on voice and guitar and Trevor on drums and samples.

On July 26, your second album “Levitation Chamber” will be released via Prophecy Productions. What you can share about its overall production?

When we went into the studio, we were focused on capturing the atmosphere and energy that we feel during a live performance. We wanted to document that sense of catharsis and exhilaration. The goal was to find a balance between sonic quality and live energy. We wanted to channel a different kind of energy into the music that neither of us had ever done in the past, to explore a new framework of sounds, influences, and experiences.

Simultaneously to the second full-length, Prophecy Productions will re-release and publish on the same date your debut “Break in the Skin”. Generally, which differences you can detect between your debut and the upcoming second full-length? Also, how divergent was the approach when you started composing for your debut?

For “Break in the Skin”, I was working on the sounds I was hearing in my head and would record a couple of songs at a time, in my friend’s studio, as the album took shape. I really wanted to capture a very intimate and dreamy sound on that album. “Levitation Chamber” represents a new chapter of the band on a personal and musical level. With the inclusion of live drums and a variation of different synths, the sound is more of a full palette and has moved in a direction that not only expands on the instrumentation, but also the creative vision as a whole.

How has the inclusion of live drums during the recording process of “Levitation Chamber” modified/improved the band’s sound?

Trevor brought driving energy to the overall sound which resulted in me changing the low-key hollow-body guitar sound I was originally working with on the first record, to one with a much fuller and more cutting resonance. For this album, we initially recorded the songs “live” instead of tracking each instrument separately in order to capture the intensity and energy that emerges. Working on writing and recording with a drummer also pushes the sound into more complex territories as a response to the rhythmic inspirations he brings to the songwriting.

On top of everything, “Levitation Chamber” was recorded by Grammy-nominated producer Jack Shirley at Atomic Garden Studios. How was working with him and which sort of feedback we were able to learn from him during this process?

Jack is very straightforward and easy to work with. He was putting the finishing touches on the new studio he was building in Oakland and we were the first band to record there. He is all about capturing a band’s essential energy during the recording process. Jack was great at reminding us not to hyper-focus on minute details and he kept us moving forward.

Silence in the Snow is currently formed by you and Trevor DeSchryver. Additionally, as we already are aware of, Trevor is part of the highly acclaimed US’s funeral doom metal band Lycus. In this specific case, what role does his musical background play in Silence in the Snow‘s music?

Funeral doom is a genre of music that is very emotionally demanding rather than technical, and the heartfelt nature inherent in both Lycus and Silence in the Snow connected us. Both bands are on different ends of a dark spectrum of music. While Silence in the Snow is more minimalistic, it also incorporates similar feelings of longing and sadness that are present in funeral doom.

Also, what you can share with us about your own personal musical formation and/or background?

Since childhood, I always had an intense interest in and attraction to music with a darker, melancholic sensibility and that has strongly influenced me. Singing and finding my voice was and has been, a very exhilarating and cathartic release. I took some voice lessons in my teenage years from an older woman who had a background in opera. She used to put her fist in my diaphragm and have me sing scales. I would fall backwards if I didn’t use my body correctly. It was very frustrating and when I finally got it right it was a huge step forward for me. Learning to play the guitar around age 12, I spent some years writing and playing alone until I formed my first band. Growing up I went to schools in different countries and didn’t have much of a chance to connect with other musicians in order to form a band until after high school. It’s truly magical when you find other musicians you feel a creative spark with!

What does 2019 have in store for Silence in the Snow in terms of touring both on US mainland and in Europe?

We will begin a summer tour of the USA in mid-August with THIEF and we are very interested in touring Europe when we can arrange that! We’re excited to share our music with audiences and have new experiences!

So, Cyn, we’re almost at the end and with this please be free to say hi to your fans and our readers. Thank you so much for this interview!

Thank you for taking the time to read this interview and I hope to meet many of you during our upcoming tours!