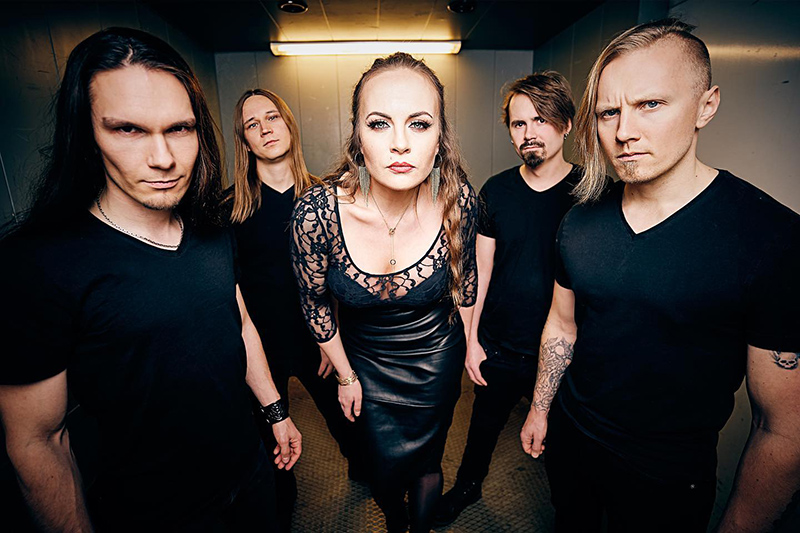 Even though Finland’s Smackbound have just released their debut album “20/20”, their pedigree speaks for more quality. Composed by well-navigated and professional musicians, Smackbound is ready to smash our ears with their successful mix of melody, metal and energy. Let’s read together what the singer Netta has to say about “20/20” and the band. Enjoy!

Hi Netta, welcome to Femme Metal Webzine. How are you and how life is treating you in these precarious times?

Hi Miriam, thanks for having me. Life is good. If we look to the prospective that we are in this COVID 19 pandemic time where everything is changed and all the live activities are canceled.

For the readers who are not still familiar with Smackbound, would you like to tell us how the band came together?

Yeah, sure. We started in 2015 when I found the band. At the time, I wrote three songs for Smackbound which I submitted at the attention to Teemu Mäntysaari and Tuomas Yli-Jaskari, which are now respectively now the guitarist and bassist of the band. I previously knew them because we both worked in the same studios, the Sonic Pump Studios in Helsinki.

Our production offices were next to each other. After playing the songs, I asked them if they were interested to join the band and they kindly accepted my offer. Then, we quickly joined together for a brainstorm session for understanding who might fill the positions as keyboardist and as drummer. We then come in contact with Vili Itäpelto and Rolf Pilve who subsequently join the band in those aforementioned positions.

And as Tuomas and Teemu, they had a listening session of my material. Basically, that’s it. For understand, if we got along and cope with each other, we started as a cover band which we called Run for Cover. Under this moniker, we played a lot of national tours and gigs and we focused on playing only classics from the 70s, 80s and 90s such as Whitesnake, Dream Theater and Iron Maiden.

These experiment was useful to comprehend the dynamics between us as a band and the team. Fortunately, we realized that we’re getting along really nice and we’re enjoying each other’s company. After 1 year of gigging, we started to compose together the songs for the debut album. Everybody did their part and finally, we are here publishing our debut.

As you have previously mentioned this experience as a live cover band. It’s quite a peculiar choice because, usually a band first focus on composition and just then on live chemistry. I’ve been wondering to know, which is the valuable lesson that you and the band learned throughout this initial phase?

Well, the thing is that: I don’t want to lose any second of my life to collaborate with people that I don’t get along with. I also don’t want to waste their energy and my energy, if we aren’t compatible. That was something important to really check out, considering the fact that we deal with different situations, stress and tiredness.

When we play together, we have to keep playing in all the aspect and this includes even group dynamics. For me, it was really fundamental because if it would have been problems then consequently, there would be a line up change before continuing with the song writing. So, for us, the valuable lesson that we have learned is to really make sure that we are working with the right people which you perfectly get along well with.

You know, in a band, you have to spend a lot of time with your comrades and from time to time, tough situations can happen and then, the group dynamics plays an important factor. Given that, the band should be able to work with each other well.

On June 12th, it was released Smackbound‘s debut album “20/20”. What can you recall about its general production?

We, we wrote the songs throughout these 3 years in a few segment. So, we always drove to the forest to our summer gathering and we stayed there for few days in a row while composing them. Subsequently, we have fully recorded them in Helsinki at the Sonic Pump Studios in different moments: for example, we have recorded the drums of the first 7 songs back in 2018 while the drum parts of the rest of the songs, were recorded back in 2019.

Essentially, this is how we work and tend to record everything in parts. Of course, we had more songs available then the album includes because we wanted to be sure to know which songs worked the best together. Basically, we wrote, produced together the album and now, we are excited to see what it will happen once it will get released.

I’m really keen to learn more about it because I enjoyed a lot your singles and now that, we have introduced the topic, I’ll start by asking about “The Game”. Would you like to tell us more about its video and song?

Yeah, for sure. There’s an interesting story about it: so, we had a little disagreement on this specific song because while we listened to the demos, the guys didn’t want it on the album. On the contrary, I was the only one to support that choice [laughs]. Basically, I overruled the guys’ decision because I told them that I had already written the lyrics and also, I had a clear vision of the song should sound.

At the end, we agreed that “The Game” has to be present on the album. In order to be appreciated by the rest of the band, my lyrics are clear and tight. On top of all, it was one of the difficult songs to write due to the high expectations that I hold to towards it and its technicalities in the melody that I attempted to preserve and make justice to.

Personally speaking, the lyrics are really important and I want that the message contained in it to be right. So, I took my time for get the lyrics done. Instead, about the video, I conceived the script and I planned the visual too. I had in mind the idea to glaze our bodies since I see a picture in the National Geographic or so a long time ago. In the magazine, I saw this woman completely covered in clay and for some obscure reason, it stayed in my mind.

Thus, when we started discussing about its video release, I realized that was the moment to propose the idea of us playing as statues. I simply went to a hobby store and we painted each other with clay. Besides, being quite a visual and artistic video, for me , it was the only wat for represent in the correct the message portrayed in the song.

If I’m correct, the second single was “Drive It Like You Stole It”. Instead what can you tell about this song? I find much more rock-y, straight in your face…

Actually, it has been re-released a few weeks ago via Frontiers Records SRL. But, “Drive It Like You Stole It” was our first single which was released back in July 2019 together with its own video. It marks our beginning and I think, it’s the most hard rock song that we have feature on our album. Normally, “20/20” deals with a wide spectrum of musical style inside the metal genre.

We consider our songs to be quite diverse, however, “Drive It Like You Stole It” is the most positive and straightforward song of the album. It holds this confident message of self-empowerment. You have to be brave for be yourself.

So, let me start with order cuz’ principally you’re a classically trained singer which also studied pop/jazz style. And now, I come to the question: in all this distinct musical environment, which place takes metal and how your previous musical formation helps you?

Well, I started with classical music and classical training while I was singing with a choir back in 2007. Later, due to my love for soul and blues, I started with them. It came in on a quite early period of my life when I love the freedom and the sound of blues.

For a bit, these sounds became quite important and that’s why, I switched to pop and jazz studies. For me, studying all these different techniques have positively impacted on my overall voice mastery. Of course, rock and metal have been always natural due to the personal variety of musical tastes. You know, the raspy-ness in my voice is there and it comes out naturally.

If we talk about metal, the switch was quite automatic because here in Finland, we listen to it a lot. Not many people are aware of this but while you sing metal, you use a lot of classical training technics that I’ve learned back in the day. With the techniques that I’ve acquired throughout my whole experience, I understood that with metal I’m able to express myself with which way I want.

On top of that, you’re also an actress. How your passion for it started and so far, on which project are you busy right now?

Surely, it started earlier than singing with me playing and watch a lot of movies when I was a child together with my sister. Since I remember, I’ve been always an artistic person and both singing and acting have been since forever in my blood. I started with musical theater then I slowly veered to camera production such TV series or so.

Concerning current projects, right now everything was postponed due to the COVID 19 and maybe, only later this fall, I’ll be back in production. However, I was featured in a Finnish Netflix production called “Sorjonen/ Bordertown” and in another crime series based in Helsinki.

In normal times, which were supposed to be the original plans for Smackbound?

With our release in late spring time, our original plans was some gig dates but unfortunately, we had to cancel everything. Additionally, we had to cancel our festival season and now, it looks like that so unsure that we don’t know when we going to perform live.

At the state of the things, we are not even able to perform live during a live streaming because of some of the members in Smackbound live abroad in different countries. What’s left to do, we have to wait an see how the situation evolves.

So, Netta, this was my last question. Please, with this be free to say hi to your fans and our readers. Thank you again for your time and the interview.

Thank you. Thank you Miriam, it was a pleasure. Please state safe and take care. Have a good summer.