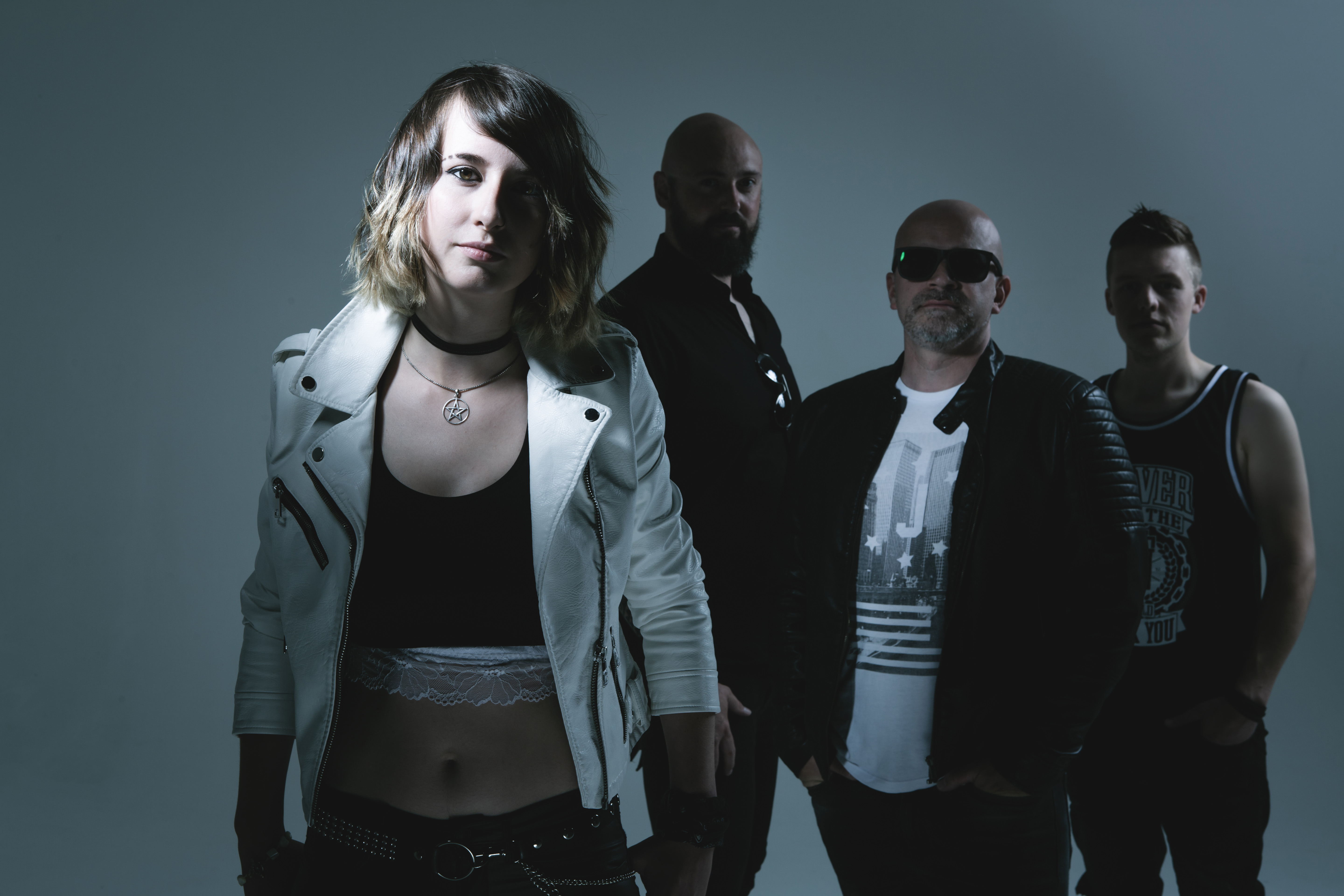 Violently raising from the deep depths of the regions of West Flanders in Belgium and South Holland and Limburg in The Netherlands, the melodic death – thrash quartet Spoil Engine is ready to unveil the next opus called “Renaissance Noire” out now via Arising Empire. Let’s read together what the surprising and talented singer Iris Goessen told about their newly released fifth full-length.

Hi Iris, welcome to Femme Metal Webzine. How are you and how life is treating you?

Hi. Very well. I’m in my hometown, Maastricht, at the moment and I’m preparing the release show for our new album “Renaissance Noire”.

So, for our readers that are not familiar with Spoil Engine, would you mind introducing the band and how you guys, you did come back together?

Well, they formed together years ago, long before I joined them because I joined the band 4 years ago and since then, we have released one album called “Stormsleeper” and our second is called “Renaissance Noire”.

Let me ask you, instead, how to manage to join the band, Iris…

I think I joined the band 3 years and a half or 4 years ago and they asked me to audition via Facebook. The guitar player Steve just sent me a message if I did want to participate in an audition because they already auditioned 30 singers without success. Subsequently, I was invited by them in Roeselare, in Belgium, for a meeting with the rest of the band. At first, I recorded a demo then I met them and we rehearsed together then they asked me to join the band.

You mentioned “Renaissance Noire” that was released on the 15th November 2019. What you can share about its general production?

Well, we recorded all the stuff ourselves, so each band member has its home studio: I recorded my vocals here in Maastricht, Steven and Loco recorded their guitar and bass sections in Roeselare while Matthijs recorded his drums parts in Dordrecht. After that, we met up all together and we did the mix and mastering in Sweden with Henrik Udd. He collaborated with bands such as Architects, Bring Me the Horizon and he did a good job on that. For this reason, Steven and Matthijs flew to Sweden to get that fixed and they stayed there for a week. We are very happy with the outcome.

On a lyrical aspect, what would you like to say about it?

Well, they are very diverse. Some of them are personal stuff while others are political stuff and mental health. I wrote them all by myself, they’re all different and I don’t like to have just one theme in the album, I just want to use several topics that can resonate with people.

About this, the album was introduced by the single “R!ot”, would you like to offer some details about this song?

Well, if you watch the music video you can deduce that it’s about climate change and pollution. It’s an important topic and nowadays, it’s coming up more frequently than ever in all over the world. Take for example, the protests which have happened in every city and we just want to dedicate a song to that cause.

As I mentioned before during our second question, you joined the band 4 years ago and as Steven has stated in the press release “The band went through a string of several line-up changes”. How this painful process affected the band?

It’s always sad when someone leaves the band and, you know, it takes a lot of time to find the right replacement and get used to each other on stage. Now, we are a 4-piece band and first, we were a 5-piece band, so the previous guitar player left the band last year and we decided to do it with the four of us because we went to China for a tour with this line-up and it worked very well. After this nice experience, we decided to stick with this formation and we don’t want the hassle to search for a new guy or girl and once again, get used to each other for more than a year. This is simply the explanation of the reason why we opt for this solution.

The new album features guest star Jeff Walker, the guitarist of Carcass. How was collaborating with him on the song “The Hallow”?

So, everything started through our sound engineer due to the fact that he’s also the sound engineer for Carcass and Slayer. In this way, we connected with Jeff and at the time, he was recording the vocals for Carcass with him. So, Steve was in the neighborhood, he visited the studio and consequently, he met him for a chat and after, Steve asked him if he was interested to collaborate with us. He was really excited about it. Unfortunately, I didn’t have the chance to meet him personally but I’m very happy that he accepted our offer to play on our record.

We have previously spoken about Henrik Udd and his mixing process. How was working with him and what also what have you learned from it? As we said before, “Renaissance Noire” was separately recorded by each of the band members’ home studios. How exactly does this procedure work out?

Well, we record separately and we always do a pre-production online because we live so far away from each other. It works just this way: we put a song together on our laptops and we send each other the files. Of course, the song starts on growing and growing then we hit the rehearsal room, we rehearse which songs work and which ones don’t and we take note on our computers. Basically, we use this method also for “Renaissance Noire”. Afterwards, we started recording the real takes, we re-organized them together and we sent them straight to Sweden to Henrik for the next phase. He started mixing and 2 weeks later, Steven and Matthijs flew to Sweden to supervise his work and give him some ideas on the musical direction. Anyway, he’s such a professional that he was already aware of our music style and this has facilitated the mixing and mastering processes. He’s a really nice guy, we collaborated with him on “Stormsleeper” too so, for that occasion, I had the chance to meet him in Sweden but this time, unfortunately I didn’t manage.

We have also cited your previous album “Stormsleeper” that was released back in 2017. In hindsight, which differences can you distinguish between “Renaissance Noire” and “Stormsleeper”?

Well, on “Stormsleeper” we both guitarists played a crucial part in writing the musical parts and we have just one left which makes Steven the only author of the guitar riffs and basically, he put together all the songs. Mostly I think that in our new album there’s less metal core vibe in it and its guitar parts can recall some Pantera old-school music. Instead for the vocals, if compared with “Stormsleeper”, my style is much more varied because I learned a lot in the last couple of years. Also, the previous album featured our old bassist and Loco has a specific and recognizable bass sound. Also, our drummer Matthijs is a producer himself and this surely, helps us out in our work. In general, “Renaissance Noire” is a little darker and more direct of “Stormsleeper” which saw more metal core and melodic. While this one is just loud and hard.

Right now, I would like to know your opinion/personal interpretation of the album title. Which meaning does it have for you?

If the title gets translated it means “dark rebirth” and mostly it deals with what Steve stated in the press release about the struggling periods of the band: members who left the band, our stuff robbed in Milan in 2018 and a lot of shit was going on but for all these experiences, we came out stronger.

I’m about to close my interview, so I wanted to know what 2020 has in store for Spoil Engine in terms of touring and promotion. Will we see you on the stage?

Yes, we will definitely start playing again. We’ll have our release show in Roeselare and then a couple of local shows. Instead for 2020, we plan on touring, we cannot say anything about that at the moment but it’s in our plans and we will play as many shows as possible.

So, Iris, we’re almost at the end of this interview. I really thank you for being available for us. Please be free to say hi to your fans and our readers.

Thank you so much for having me.