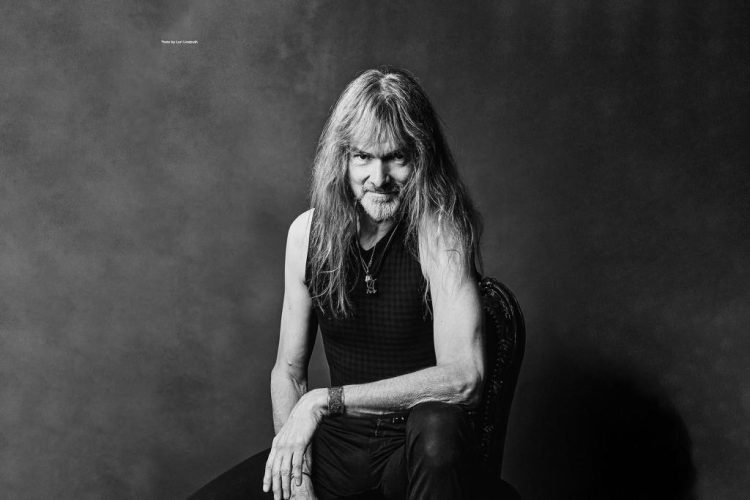 STAR ONE – An Interview with Arjen Lucassen

After more than 10 years, the Ayreon mastermind has dusted off from the closet the monicker Star One. Indeed, “Reveal in Time” presents the Dutch multi-instrumentalist as one of the heavier sides of the whole musical project. So, I investigated a little bit about his last opus. And, enquired over space traveling and sci-fi. And, a funny robot alike voice during our chat. Enjoy!

Hi Arjen, welcome back to Femme Metal Webzine. How are you? And how these strange times are treating you?

All is good here. And, like I tell everyone, I’ve been on lockdown for the last 30 years. I’ve been a total recluse. So, I didn’t even notice it.

I don’t watch TV, I don’t have whatsoever social life. I’m always stuck at home locked up in the studio. All is good here.

So, the big news is here Arjen. After, 12 years you have revamped the monicker Star One. What triggered such a choice? And, why do the fans have to wait such a long time?

Sorry, sorry for that [laughs]. Well, as you know, Star One is the side project of Ayreon which is based on its metal side. Every album that I create is a reaction to the previous album.

And, indeed, the previous one was “Transitus”. It wasn’t heavy at all. It felt like almost a musical because it wasn’t prog and neither hard rock. Given this, I felt the need to make some noise again. It was time to just plug in the guitar and just create something more straightforward.

In a way, Star One represents your metal side while Ayreon is the prog-ish side of your musical universe. When did you realize that the material originated from the “Transitus” session would be suitable for Star One?

In reality, it’s all brand new material and it came almost naturally. Basically, after finishing “Transitus”, I plugged in the guitar and it was very easy. The last Ayreon album took me three years in the making, while this Star One was just three months.

I love the three introductory singles for “Reveal in Time” which are “Lost Child of the Universe”, “Fate of Man” and the self-titled single. Which different musical sides of the upcoming LP do they represent?

Well, the cool thing is that every song from this album is completely different. For example, you mentioned the first single “Lost Child of the Universe”. It’s a huge epic song. While “Fate of Man”, it’s a really fast metal song. Then, you have “Prescient” which is the typical prog song that features many vocal harmonies and some weird time signatures.

In the last instance, you have “Reveal in Time” with its funny video and song. Almost catchy and a bit commercial too. It’s based on Bill & Ted’s movie franchise. Though, if I could summarize this album I would say that “Reveal in Time” is the most versatile Star One album so far.

Following the release of “Reveal in Time”, you have also decided to reissue the previous two full-lengths “Space Metal” and “Victims of the Modern Age”. So, as an artist, how do you feel about the fact that those albums are still preciously cherished in the fans’ hearts’?

I was simply amazed because we did the pre-sale and now, everything is sold out. It sold all the limited quantities pretty fast. For me as an artist, it’s great to know that these releases are seamlessly timeless. Indeed, I enjoyed making the first album because it has a lot of catchy songs. But, I’ve enjoyed the second one too because it’s much darker and heavier than the first one.

What can you recall the production of those albums? I mean, you mentioned how musically different were those releases…

Basically, “Space Metal” was intended as a solo album but things went wrong [laughs] because things went south with Bruce Dickinson’s manager. However, it’s important to say that everything was recorded in a pre-COVID situation which makes it easier to fly over in my studio all the involved artists. And, I was able to record together with my best friends Floor Jansen, Sir Russell Allen, Damian Wilson, and Dan Swanö.

During the sessions with them, I could get the best out of their vocal capabilities. Unfortunately, for this album, it was impossible to fly them over and that was such a shame. So, I opted to record the guide vocals with some local singers here in The Netherlands. These pre-production demos needed to be exact because as mentioned before, it was not possible to fly them here.

As per your tradition, your album always exceeds the expectations in terms of the involved guests. So, this time we have Roy Khan, Sir Russell Allen, Jeff Scott Soto, and Joe Lynn Turner. In which way, you have accomplished the choice of the singers? On which base, do you take your final decision?

Well, I’m a subscriber of several music magazines and, if I read in it about a good singer, I write it down. Then, in the evening, I access YouTube and check him/her out. Indeed, now I’m completely spoiled because I work with the best singers in the world. So, I’m not easily impressed. However, once finished this research phase and before starting the new album’s session, the outcome is a list with a hundred names.

Then, I continue by checking who from this list would fit the musical style. Secondly, which singer would be suitable for the concept and the album. After managing with the previous steps, I check one by one for each singer which of the composed songs will easily adapt to him/her. For example, for “Fate of Man”, I immediately thought of Unleash the Archer’s Brittany Slayes because of their musical style.

What also is important for me is that the singer likes the song. She loved it for the first moment she received it. Especially, when I told her that the song is based on “Terminator”. I think to have the talent to understand how to choose the singer with his/her corresponding song.

About the “Terminator”’s movie, on your official Facebook page, you have released a list where you mentioned on which film the songs included on “Reveal in Time” are based. Given this, were the songs composed before you watched the movie or vice-versa?

Indeed, it’s a good question. I had always the music first. So, in this case, I had these 11 songs ready. Then, I just took some time to watch my DVDs. Among my collection, I searched for movies that had a common denominator time. As a result, I had 40 films and out of these, I had to select the 11 movies that would fit the songs.

As for many artists, COVID has temporarily stopped live tours. In your case, it has affected the planning of one of your big special events. At the state of the events, I won’t ask you when it’ll happen again. But, have you ever considered performing live these three Star One releases?

Well, I would rather play an Ayreon show and then, including a few Star One songs. Because it’s what we already did back in 2017 for the Ayreon Universe show. For that occasion, we played “Eye of Ra”. The same happened for the second show. So, I would like to keep the same structure, if possible.

Now, the 1 million dollar question. Given the situation, do you think that a third Ayreon special show will ever happen again?

Well, it was planned for 2021. Unfortunately, it wasn’t feasible. Then, we moved to 2022. Now, it is tentatively scheduled for September of this year. But, it’s too early because it will be almost impossible to have 12.000 fans flying from all over the world to The Netherlands. So, we have decided to reschedule it for September 2023. Of course, nothing is sure. So, if by the end of this year, the situation doesn’t improve, we’ll postpone it again.

You are more than welcome. About that, I was afraid of the fans’ reaction to the last Ayreon album. Somehow, with this one, I had a good feeling about it. So far the reactions of the listeners, it’s quite positive. I hope that the fans will enjoy this release. If compared with “Transitus”, it’s a bit more straightforward, catchy and I dare say, easy listening too. Please just let me know what do you think about it. Email me or reach me out on Facebook.