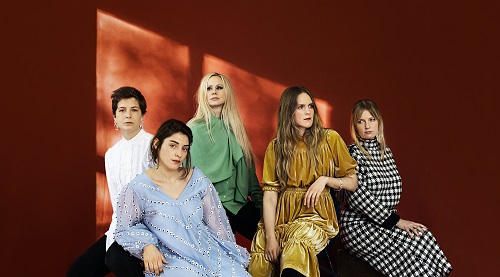 Susanna Wallumrød (which is much more known with only her first name) is a well-established Norwegian musical artist and under the moniker, Susanna & The Brotherhood of Our Lady is accompanied by her valid musicians. If you closely analyze her discography, in effect, you’ll realize that the common denominator of her career is marked by constant research in experimenting with different musical paths. And her new album “Garden of Earthily Delights” (review here) offers more than a musical journey. Just read this interesting interview with us.

Hello Susanna, welcome back to Femme Metal Webzine, how are you and how life is treating you in general?

Hi there, thank you for your interest in what I am doing. Life is up and down I would say, but overall good.

On 22nd February it was released your 13th album “Garden of Earthily Delights” via your own label SusannaSonata. Would you mind to introduce the general musical concept and how you did come out with it?

Yes, it was great fun to release this music and album in February. I was invited to do a commissioned work for a festival in Norway back in 2017, and after some pondering of what to do, I stumbled across Hieronymus Bosch‘s art and wanted to make music inspired by his art. I also took the chance of putting together a new band with musicians I had not worked with earlier.

On top of all, I’ve was happily surprised to learn that “Garden of Earthily Delights” was largely inspired by the Dutch painter Hieronymus Bosch. Which are the main artistic features that you enjoy the most about its painting and personally speaking, how do you relate with him artistically?

As mentioned I stumbled across his art and was immediately fascinated. I have seen the ‘Garden of Earthly Delights’ painting several places earlier, but I haven’t given it so much thought. When I realized it is a five hundred years old painting, my curiosity was awoken, and I started to look into the man and his art. I got to go and see the big retrospect exhibition in his hometown ‘sHertogenbosch in the Netherlands too.

“Garden of Earthily Delights” was published under the moniker Susanna & The Brotherhood of Our Lady. Who they are and how they ended up to collaborate with you?

The band for this project is especially put together for the music I wrote. I wanted to take the chance and play together with other musicians than I had before, based around voices, chord-instruments and electronic sounds. They are all brilliant musicians with different projects of their own, like Listen to Girl, Stina Stjern and Propan. It felt like a big chance to both compose something brand new and put together a new band, but I am very happy that I did so. How it all sounds is a result of us playing together, spending quite some time finding our place sound-wise and playing-wise for this music and in the group.

When I’ve listened to your single “City of Hope” for the first time I’ve suddenly lost track of time. It’s such a magical song however I would like to your impression about this song…

“City of Hope” is a mix between a pop song and a chant, a glimpse into a Bosch-like world dragged through the streets and hills of Los Angeles, where I wrote this music.

Considering the fact that this album was commissioned by Vossajazz Festival 2017 and if compared to your previous album “Go Dig My Grave” released back in 2018, which musical and different approach can we detect in this new full-length?

Even though all my musical projects somehow belong together, it’s two different approaches to gather and research a project like “Go Dig My Grave” (with other people’s songs mainly) and composing my own music. I also wanted these two albums and projects to sound different, “Go Dig My Grave” is very much based on the acoustic instruments and voices, while with “Garden of Earthly Delights” I wanted to transcend the sound world and expand the sound of my music to cross over into new and other landscapes. I still play live with both projects, which is very rewarding for me on an artistically and personally level.

Throughout the years, you showed to be such a diverse and prolific artistic crossing over the boundaries of every musical genre and your extensive discography is a consistent proof of this but which the main obstacles that an artist like you can encounter while trying to propose something different every time?

I am not necessarily seeking something different every time as a concept, but I am trying to stay true to my artistic vision and try to follow the different paths that appear in my work. So far it has given me a lot of new inspiration and drive throughout these years. At times the music business and industry seem a bit confused by my different approach to being an artist though, which can be slightly challenging. It seems like part of the music industry would like for me, and all artists, to do just one thing- often the thing defined as the most commercially successful.

I’ve literally fallen in love with your music thanks to your debut “List of Lights and Buoys” released back in 2004. How everything has changed since then?

Oh, that makes me glad to hear. So much has changed, I have learned tons of new things since then, but the music business has also changed so much. It is an adventure for sure. I still love that album though, it feels important to me, and it somehow feels like the process with making that first album which lasted for several years, made a very solid foundation for the years and work to follow.

I can stay hours and hours by naming all your past collaborations from experimental artist Jenny Hval to the early collaboration with the pianist Morten Qvenild and Swiss harpist Giovanna Pessi. In general, from each of these collaborations and I imagine it’s an active process of exchanging pieces of information, feelings and most of all, sensations – what did you infer from all these precedent experiences?

Yes, all the collaborations are an interesting mosaic in itself- it has been absolute life-giving and very important to my creativity. It has been very intuitive all along, the process of my different projects, live concerts, and releases- and also the collaborations. That said I can mull over ideas for a long time before I go ahead, but at some time the ball started rolling and it seems like it’s not going to stop for a while. Let’s see where it rolls.

Before concluding our interview, what 2019 has in store for you?

This year I play live with almost every project I have up and running, so I play solo, I play duo with my cousin David Wallumrød (a project that only has one track available on SoundCloud so far), Leonard Cohen cover, my trio, the Go Dig My Grave quartet, the new Garden of Earthly Delights music and also a tribute to Joni Mitchell project that I have been a part of which is great fun. I am also composing and planning for a couple of new releases to come the next years. Lots of fun things to do I would say, but a huge load of work- as I still administrate both the label and manages and produce my live work too.

So, Susanna, we’re almost at the end and with this please be free to say hi to your fans and our readers. Thank you so much for this interview!

Thank you again for your interest in my work. I am very thankful for every reader and listener these days, thank you for checking out both my new and old stuff. Hope you can find some favorites in there! Take care.