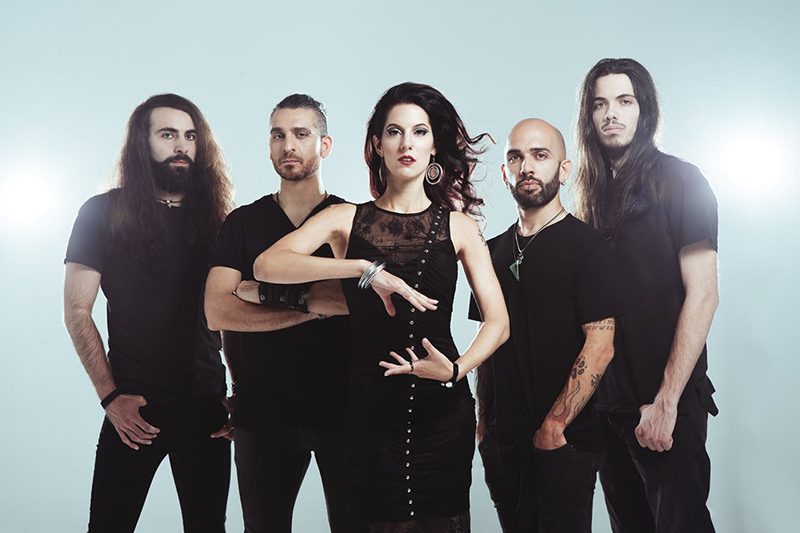 TEMPERANCE – An Interview with Alessia Scolletti

Like the title of their last LP, “Diamanti”, Italian symphonic metal masters Temperance talent and quality’ keeps shining with every release. Stating this, I take the fruitful occasion to interview one of the three singers, Alessia Scolletti, for learn more about this opus. Enjoy!

Welcome back, Alessia! How are you and how is this pandemic treating you?

I’m fine, great, also we had this release party last Saturday night. We had a lot of fun; we met a lot of people there, that’s the best way to end this fucking 2021 [laughs]. Yeah! There’s no reason to laugh, I know, but at the same time we wish for the best for 2022. Let’s see what happens!

I am so hopeful that this will go better! Let’s hope so! For what I recall, last time we spoke together was for the acoustic EP “Melodies of Green and Blue”.

And now the brand-new album, “Diamanti”, is finally out! What can you tell me about it? I mean, when you guys did start to produce it? And how did this album come out?

We were talking about a new album since last year, I think, but of course we already released “Viridian” at the beginning of 2020. So, we had to be more patient and of course the pandemic didn’t want to us to go on tour and promote the album. So we had to wait, and wait and wait all over again.

Being ‘static’ at home for a long time we then decided to do something for fans and also for the world like a sort of yelling. And there, we’ve decided to release something only on digital format just to remember that Temperance is still alive! “Melodies of Green and Blue” was a great compromise for both releasing something new and, at the same, re-promoting “Viridian”. Because, unfortunately, it didn’t have the chance to be promoted in a certain good way.

After that, I think we had to wait even more for the right period to get back in the studio. And we wrote something for a new physical release, not only digital. We went in the studio all together to record “Diamanti”. And now I realize that a lot of time has been passed. Indeed I don’t know exactly when we were there, it was of course this year, maybe around spring or summer.

Then, in three or four days, me, Marco and Michele recorded the vocals lines. We did an amazing job together because we were relaxed and we were really focused on our work. Of course, we had a lot of fun. As you may see on the preview of the album, we decided to release different versions of the title track.

Actually, we really had fun this time, more than on the previous one. I think this could be noticed on the album. While recording it, we felt a great chemistry all together. Indeed, I like to be humble, and I really am, but I’m proud of this work more than the others. You know, we’ve been together for more than three years now and we had a lot of adventures. Giving this, we had the chance to know each other better. And this improved a lot our qualities.

Ok, you’ve just said you feel much prouder of this album, compared to “Viridian”, so what are the differences, in your opinion, between these two records? How does it feel for you?

I think the real difference, this time – and I think I shall thank pandemic for this – recording all together in the same studio for the first time was amazing! In my opinion, it was the highlight of our work together because, as I said, for the previous album we were separated. This time we couldn’t be apart and this was our strength. Also we had more time to discuss decisions to try to find new solutions, for the melodies, the sound and so on. I think this time we had the right time to work together well as a band and this is an important thing! That’s why I think I am, personally speaking, prouder of this latest work than the previous ones.

“Diamanti” stands in Italian for “diamonds”, what about the album title? What is its meaning? Why did you opt for an Italian title and not for an English one?

Well, it’s all linked to the original song, “Diamanti”. It was completely written by Marco and when he gave us the demos for the album, he already opted for the Italian language. I think it’s great, we were really surprised for that. And talking together, we decided to use the term “Diamanti” as the title for the new album to have just for a nice memory for all of us!

“Diamanti” are, of course, the rocks, the stones, but for us it has a different meaning. In the song, we use this metaphor as spirits or visitors from other worlds. When I’ve learned the lyrics of “Diamanti”, I’ve thought of these images, the sky with these diamonds that fall like a sign from the sky.

We always talk about hope, dreams, and positive things. So, we decided to use these images, diamonds or “diamanti”, because they are so beautiful, they shine so bright and they also have these trends outside and inside which make them unbreakable. Also, the hopes during this period must be unbreakable as well.

What can you share about the single “Breaking the Rules of Heavy Metal”?

It’s a completely type of music, isn’t it? [laughs]. We’ve thought about “Breaking the Rules of Heavy Metal” as a hymn. After all, the role of this song remains and while listening to it, you should feel like a real metalhead. In general, for us metal and music are our “fuel”, our energy. And with this song, we’ve decided to give our fans an instant of this powerful vibe. And nowadays, of this energy, of these vibrations, of this kind of “fuel”, we have a serious need.

As I already said, the period we’re living is hard. And sometimes, we don’t need something too much complicated with deep meanings. Actually, simplicity is also the best. I know that “Breaking the Rules of Heavy Metal” is a simple song and it doesn’t have a deep meaning. However, we think that it has this role for people and our fans to uplift the spirit. If you’re feeling down sometimes and this song makes you laugh in a certain way, well, you need in that moment. I think this is our anthem for those angry or sad days of this period.

Ok, my last question: what’s in the pipeline for Temperance now?

Well, we have a lot of plans but t’s quite hard to figure out if these place will be realized or not. But, at the moment, we are still waiting for updates about Tarja‘s tour schedule in February/March 2022. About that, up to now, we don’t have any news in regards to any cancellation or postponement. So, I deduce that’s confirmed. But, we’ll see.

After that, we have already talked about a headline tour that would began in the end of March/beginning April. It would be great if it happens because we have a lot of gigs in UK and some European countries that we have never played before. Such as The Netherlands, the Baltic countries and Ukraine. You know just think about it, it seems so far away, unbelievable and impossible. Of course, I hope for the best.

Then, we have already a couple of confirmations for some summer’s festivals. Following the postponed tour with Leaves Eyes’ and Catalyst Prime in the US, I’m guessing that it’ll happen in the fall of 2022. Probably in November and December.

Indeed, due to the pandemic, we don’t have an idea of what will be our future now. Also, we talked with other musicians and everybody is in the same situation. It’s really hard for agency and promoters to find a solution to this problem because now they are busy to re-schedule all the tours. It’s a real mess.

So, Alessia, this was my last question. I hope you did enjoyed our interview. By now, you know that this is your space and you know that your last words will be always yours.

Of course, thank you for the interview. First of all, I’d like to thank you all the fans that support us. Then, you, Miriam and Femme Metal Webzine, for being so kind with me. Then, also thank you for your guys and girls that collaborate with you. Thank you again and I hope to see you next time.