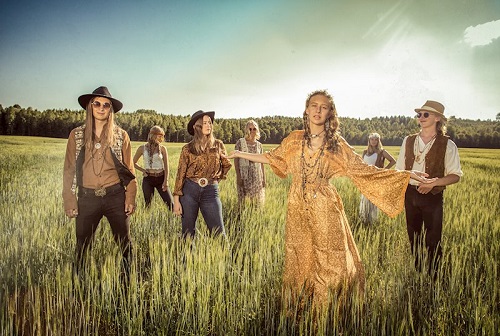 Lovers of Woodstock and Janis Joplin rejoin together for one more ritual because Sweden’s Children of the Sün are back to make us experience Woodstock once again. They have recently released a new stand-alone single “Mountain of the Sun”. But, let’s know more about this young promising band through the words of the talented singer Josefina and about their debut “Flowers” which was released back in 2019. Enjoy!

Welcome to Femme Metal Webzine, how life is treating you in these precarious time?

Thank you. Despite the circumstances me and the rest of the band are feeling fine. We keep working on new music for future releases.

For the readers that still not familiar with the band, do you mind to introduce the band? How you did come together?

Everything happened when I met the bassist Ida Wahl while attending high school. We had the same common goal: to start and play in a band. And from there we continued to search out for other musicians to add to our band. Apparently, my sister Otilia who had a previous experience as a singer in a choir and his boyfriend Jacob, who plays the guitar, even them where searching for a band so join forces and we begin to write songs we were respectively around the age of 16 and 19 years old. What we share is the same appreciation for the hippie era for acts like Janis Joplin, Jefferson Airplane, Jimi Hendrix and consequently, it was natural to end up together.

Please indulge my question, The Children of the Sün is a really young band and especially you, are quite young. I’m curious and surprised to know how you got fascinated by this musical era? Considering that it dates back to the 60s…

[Laughs] Actually, I don’t know. Maybe I’m just got inspired a lot by Janis Joplin on which I have always looked up to her. Naturally, during the 60s, she was at her top and this is my biggest inspiration. I should partially thank my parents that introduce me and my sister to this musical genre.

On 8th May 2020, it was released via The Sign Records the stand-alone single “Mountain of the Sun”, what insights can you share about it?

“Mountain of the Sun” is a tribute to life. To capture every moment and to live in the present. The song is dedicated to Hanna, our guitar player Jacob’s little sister who passed away a couple of weeks ago which was only 11 years old. This song has a special place in our hearts.

However, back in July 2019, The Children of the Sün has released their début “Flowers” via The Sign Records. So far, how it was received and do you mind to recall us a bit about its production?

It has been received very well and we are very happy and proud of the result. It feels great that people have responded so good to what we’ve put so much time and effort into. Instead referring to the production, that’s me and Jacob [Hellenrud, the guitarist] who take care of composing music. We began to collect our ideas more than two year ago for “Flowers” and we needed that time for create what it turned out to be our début.

“Flowers” was released via The Sign Records, a Swedish powerhouse label in terms of doom metal and 70s rock. How did you manage to get in contact with them?

Actually, it’s quite a funny story. Two years ago our guitarist Jacob wrote to them but unfortunately back they didn’t reply back. However, this spring we received a call from them where they immensely apologized for the delay and with a serious business proposal. What it makes even much funnier is the fact that we did completely forgot about our earlier message that we’ve sent back then. We’re so surprised and really really happy.

Back in 2018, the band has won the Livekarusellen, a national music competition. I would like to understand how this achievement has reflected on and helped the band? And, for who’s not familiar with event, would you like to remind what is about?

Livekarusellen more than a competition, its aim is to promote young bands and artists by connecting them with other musicians and authors. Everything starts from the local/regional competition and by then it’s gets much more wider until you reach the national event. As said before, we win this one.

As per promotion of “Flowers”, there were released two singles which namely are “Her Game” and “Emmy”. First of all, why did you choose these particular two songs and which kind of insights you can provide concerning them?

It’s important for us to inspire others, especially young people. Like, “Emmy” for example is about mental illness. Unfortunately, this is a huge problem in the world, especially among the young population, our goal is to introduce and talk about and to show to everyone that mental illness isn’t something to be ashamed of and it mustn’t be interpreted as a weakness. Out of this experience, you become much stronger and fortified by it and you learn to appreciate life. I think it’s very important to talk about when you live through the depression because you perceive the world in different colors, for example a small light in a dark tunnel will make you feel meaningful, happy and alive. At the end of the day, this is an important message for us to convey.

In normal times, this question doesn’t procure any embarrassment but I feel anyway obliged to ask you if you had any plans to promote live “Flowers” and instead, how your plans changed?

We had a bunch of shows booked for this summer and fall, but due to Covid-19 they all got cancelled. Fortunately we have a spot secured on most of those festivals and arrangements for next year, so check out our Facebook-page for more info. We are of course sad that all of our shows got cancelled, but it also feels good to know that you can help to prevent the spreading of the virus. We take the opportunity to practice, rehearse and write music so apart from not playing live, our lives haven’t changed that much.

Related to the previous question, which are the future band’s plans in terms of new releases?

As I told you earlier, we are working on new music. Unfortunately we can’t tell you any dates or other details, but we will release a new album within the near future.

So, Josefina, we’re almost at the end and with this please be free to say hi to your fans and your readers. Thank you so much for this interview.

Thank you Miriam and to all of your readers. It has been a pleasure and I look forward to the next time. Stay well everybody!