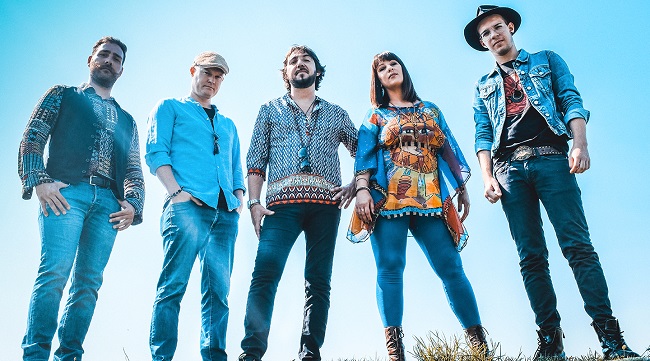 Throughout our long publishing history, we have rarely covered blues rock as a musical genre. But, as every event, there’s a first time in everything. In this specific case, this interview is even more special because little and talented bands also deserve to be promoted.

So, let’s introduce The C.Zek Band and an interview with its mastermind, Christian Zecchin. Since its inception in 2015, the Italian quartet, with the powerful vocals of Roberta Dalla Valle, has produced two full-lengths via Andromeda Relix. Whose second one, “Samsara”, dates back to November 2020. Let’s learn more about it. Enjoy!

Hi Christian, welcome to Femme Metal Webzine. How are you and how are these precarious days treating you?

Hi Miriam we are fine. We can’t complain, we are healthy, so I would say that everything is ok!

For the readers who are not familiar with The C. Zek Band, would you mind telling how did the band come together?

Since I had already some material, the band was formed in 2015. Indeed, in this adventure were already part the bassist Nicola Rossin, and Andrea Bertassello on drums who he replaced about two years ago my younger brother Enea. Then, followed Matteo Bertaiola on keyboards, and soul/blues singer Roberta Dalla Valle. 2015 marked the release of our mutual effort and debut “Set You Free”.

Indeed, the first album was positively welcomed by the sectorial magazines and the public too. Subsequently, after one year, we started to collect material for our second album “Samsara”. Despite the pandemic, we still managed to respect our deadlines. Unfortunately, we all know how things went and which is the deadly impact for the live music.

Back in November 2020, The C. Zek Band has released the second full-length “Samsara” via Andromeda Relix. What can you tell me about its general production?

The general production of “Samsara” proved to be challenging due to a line-up change (the drummer) during the preproduction and some arrangements changes. “Samsara” was recorded by me and my brother Enea at our studios, the Chakra’s Studio. Then COVID arrived, and this led to a partial stop when half of the material was recorded.

In this situation, only Roberta and I were able to continue recording while the others had to wait. Also, for several reasons, we decided to switch the main voice from Roberta‘s to mine’s. So, during the forced pause, I rearranged Roberta‘s vocal parts adapting them to my voice. Lastly, it was mixed in Milan by my great friend Luca Zamponi and all the graphics were created by my brother Enea. Despite all, “Samsara” was ready and printed at the beginning of October 2020.

“Samsara” marks, for the second time, your collaboration with the label Andromeda Relix. Not many of our readers aren’t aware acquainted with this Italian music treasure, would you mind spending a couple about it and, how is this collaboration going so far?

Indeed, we have enjoyed collaborating on the first album with Andromeda Relix. Logically, we keep on working with them once again. On this matter, Gianni Della Cioppa and his team are very helpful and capable to assists us in every step along the way.

Actually, the word samsara means “The eternal cycle of birth, suffering, death, and rebirth”. How much of all of this does reflect in the new LP?

Well, I want to start by saying that it is not a concept album. But, in the first part of the song “Samsara”, we dealt with the the creation of life and its genesis while the second part of the song is focused as a whole on the life of a person. Therefore with joys, disappointments, loves, and frustrations.

Also, I can say that since the general production was not easy, so, it reflects a lot the sense of Samsara! However, what is missing to close its (lyrical) circle is death and rebirth on which I’m already working on it for the next full-length.

Back in 2017, The C. Zek Band has released the début album “Set You Free”. Which differences can you notice between your début and this new one?

Actually, there are quite few differences. First of all, this record features almost entirely my vocals. Then, on “Samsara”, some friends collaborate on the lyrics, which are Enea Maroccolo, Davide Brunello, Andrea Messini and Roberta Dalla Valle. Of course, if compared to “Set You Free” where I completely relied on the aforementioned collaborators, this time, there were also featured three of my lyrics. Lastly, the whole production was different which it makes a mature work.

In the about section of your official website, you mentioned that often the band proposes “a series of covers that are part of the African American culture, and of the British Blues music”. Since both genres have such a wide repertoire, how do you manage to choose the right songs to play?

It’s very simple. We simply play what we like then we arrange them according our musical style. Though, as a disclaimer, we don’t want to be too niche, but The C. Zek Band was born as an artistic project where our main intent is produce our unreleased material. So, our priority focusses on that and that’s what we want to do.

What does the future hold for The C. Zek Band and how did the pandemic impact your original plan?

As things considered, I hope that the future holds positive things for the band in general (live, tour, and various gratifications). You know, behind a completely self-produced album there is always a lot of suffering. And, this unfortunate situation didn’t help us because our original plans were completely blown by the COVID pandemic.

Naturally, like all the other bands, we are also switching other systems to promote ourselves. About that matter, we are in the middle of organizing a live in the our studio which will be filmed and recorded by us. Then, we will publish everything in our social media.

So, Christian, we’re almost at the end and with this, please be free to say hi to your fans and your readers. Thank you so much for this interview.

We want to thank everyone who has supported us so far. Then, all the friends who collaborated on “Samsara”. On a last note, thank you to Andromeda Relix and to all of you!