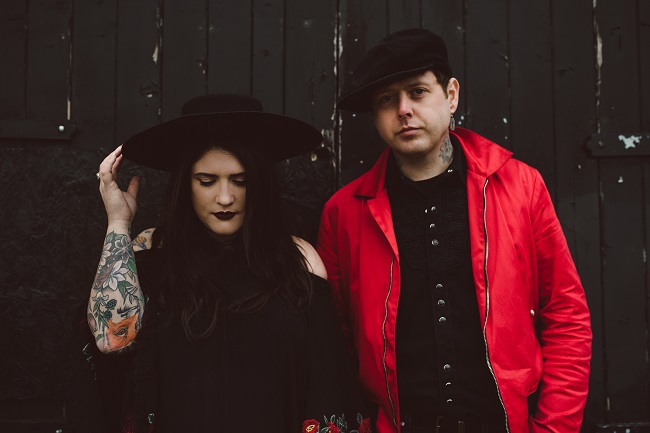 After signing a successful contract with Italian label Frontiers Music SRL, the British blues rock band The Nova Hawks is ready to unveil its debut album “Redemption”. An album full of passion, energy and a strong and uniform sound. On this occasion, I’ve reached out the singer Heather Leoni. Enjoy!

Hi Heather, welcome to Femme Metal Webzine. First, let me congratulate you for your baby. I hope he/she is safe and sound. How are you and how life is treating you in these precarious days?

Hello! Thank you!! He’s rad, thanks! I’m doing ok, up and down- probably the same as most of us getting cabin fever, but on the flip side, really enjoying spending time with my boys. I’m ready to get creative again too, which is exciting.

For our readers that are not familiar with The Nova Hawks, would you like to tell us how you and Rex Whitehall started this partnership?

Rex and I have moved in the same musical circles for a few years, worked together on a few projects and eventually it just made sense.

We are both  passionate about what we do but we are also chalk and cheese, which is awesome because we balance each other out. It’s a real solid friendship – something that truly helps when having to bare your soul creatively!

On 12th February, it was released The Nova Hawks’s début album “Redemption”. What would you like to share about its general production? When did you start to collect the first ideas for it?

We did a lot of it ourselves (I pressed a few buttons, Rex did the hard work with production!) in a cabin in the West Midlands, recording drums in there was interesting!! Placing ourselves in the area in which a lot of bands we admire come from, was definitely a massive part of the process. Being from the area, it felt right to be “home”.

We then went down to London to record with Jon Moon (Page and Plant, Amy Winehouse) at Sensible Studios. A lot of the ideas came from some old projects, reworks and then we wrote remotely from home and while Rex was on tour in the US which definitely inspired a lot of the sound. Having lived there for a while myself, it all just clicked naturally.

Actually, “Redemption” marks your collaboration with the established AOR label Frontiers Records. How and when was your first approach with them and how is going so far?

I wrote a song that one of their bands recorded, I sang on the track and it went from there! It’s going great, I think a lot of their usual demographic were surprised to hear us given their usual signings but, it’s great to stand out from the crowd, isn’t it?

Back in November, “Redemption” was previously introduced by the single “Voodoo”. Why you and Rex opt for this song and what can you share about its amazing promo video?

“Voodoo” is pretty catchy and hard punching, it’s not an emotional song as such, it’s about how absurd love can be and we thought something upbeat would be a great way to introduce ourselves- plus as you’ve mentioned the video, we both had some cool ideas for a video and wanted to roll with it.

We pulled in Ian Sepulveda who reached into our brains and pulled the video out – he’s a visionary genius and we couldn’t be happier with how the video came out. It’s a tongue in cheek horror, inspired by the great horror movies of the 1970’s. In fact, the imagery you see projected behind the actors in the video- is the imagery for the “Redemption” lyric video!

Per se, the word “Redemption” has already an important meaning. In this case, from what you and Rex must redeem from? And why choose this simple and effective word as a title album?

Probably a lot of things, there is a story about a hat, too much tequila and an uber! I’ll save that for a another time though! [laughs]. Though, it became that title after a session in the studio with Jon Moon. At the time, we’d finished the backing vocals and it was so overwhelming in the studio, that it was just decided there and then.

However, over time, it became even more apt- like the songs needed to be written so I  personally could some leave things in the past and go forward in the place I’m in now, hence ending with “Love Games”.

For our readers that are still not familiar with you, Heather, how your musical journey started? What would like to share about your artistic background?

I just started singing to get out of school lessons to be honest, and then I got a bit addicted and it’s never stopped. I’ve been very fortunate to work with some amazing musicians ever since and  I’ve sang all sorts all round the world, but always come back to rock and blues, it’s pretty ingrained from the music my parents played in the house as a kid.

The Nova Hawks’s “Redemption” perfectly manages a musical equilibrium through different elements such as “the roots of British rock, the desert sounds of California, the rawkus leads of New York City, the smoke-y ambience of London”. How much challenging is to balance all these salient points in The Nova Hawks’s sound?

I honestly don’t think it’s too challenging, the sound happened organically and it wasn’t until we sat back and heard it, that we realized how influential our surroundings had been. It wasn’t a sound we set out to achieve, we trusted the process, at the starting point of writing, nothing is deliberate, it’s later on that we make direct choices with each song to capture moments and hone in the sound.

From what I was able to detect from the lyrics, “Redemption” features down-to-earth and straightforward thematic. What would you like to add in that regard?

All of the lyrics are based on things that have actually happened, sometimes its best to just say how you’re feeling and get it out there! I like to write like this as I find the performances are so much more genuine for me and you can connect with people in a live setting.

I try to write from the heart as we as humans all experience the same feelings over a lifetime; love, loss, death, anger, the intensity is different, but they’re all relatable on some level, what better way to connect yourself with those emotions, than being honest?

What the future holds for The Nova Hawks?

At this point, given the pandemic, who knows? We’ve had a big year so far, both having new additions to our families, but we have started talking about album two already and floated some ideas around… anytime soon. Hopefully, some live shows and possibly world domination or at very least, a freshly poured pint in the same room as each other, rehearsing.

So, Heather, we’re almost at the end and with this please be free to say hi to your fans and your readers. Thank you so much for this interview.

Hello! To anyone and everyone who has taken the time to check us out so far, we really appreciate it. It’s a rough time right now but so looking forward to meeting you all on the road, sharing a drink and enjoying together!