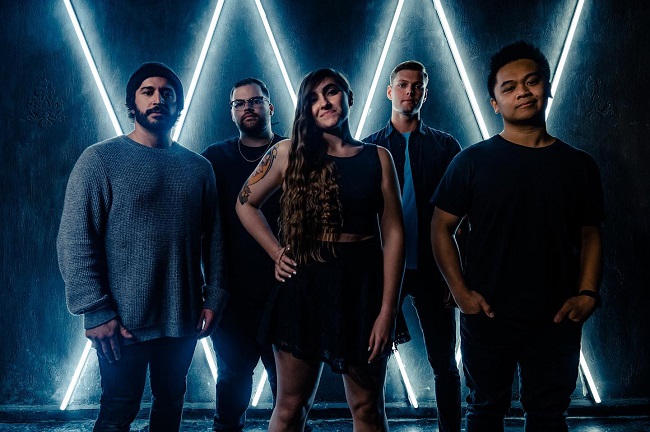 The New Jersey pop/alternative rock band The Ones You Forgot is back with the new single “Desensitize”. Despite the current situation, the band proved to be quite courageous with this move. So, let’s know more together about this talented band and what it will lies ahead on its path.

Hi Jenna, welcome to Femme Metal Webzine. How are you and how life is treating you in these precarious days?

Thanks so much for having me! Life certainly has not been easy but I’m trying my best to find my balance. Hoping that this new year treats everyone a little better!

For our readers that are not familiar with The Ones You Forgot, would you mind introducing us how the band came together?

It started on Halloween night! Matt and Ferd were at a party and played some songs on their acoustic guitars. They were looking to play covers more often but didn’t have anyone to sing. They decided to reach out to me over Facebook and asked if I wanted to jam with them in the future.

I was super shy when it came to singing but they believed in me after seeing a cover I posted online. I had mutual friends with them and often saw them at shows so I decided “Hey, why not?”. After getting together a few times it didn’t take us long to decide we wanted to start a band. The rest is history!

On 5th February, The Ones You Forgot released the new single “Desensitized”. What would you like to share about its general production?

It was a song that came together quite naturally. Ferd wrote awesome music that allowed for me to easily portray what I was feeling in the lyrics. I believe it came to me subconsciously because it wasn’t until after I read the words when I realized what the song was about. We recorded this back in 2019 so we’re so happy that it’s finally out for all to hear!

“Desensitized” follows the previous single “Something for Me” released back in 2020. Are these songs supposed to introduce an upcoming new LP or EP?

As of now we decided to keep them standing on their own as singles. We are writing new music however, so they are definitely building up to something bigger!

The word ‘desensitized’ is quite straightforward. In this case, towards what we should be desensitized?

In reference to the song, being desensitized wasn’t really by choice. It was more of a defensive reaction to the pain I was feeling and trying to cover up. I hated that feeling of numbness, but it was also the thing that pushed me to address the problem, especially when I poured out the lyrics to this song. It wasn’t until after I wrote the words when I began to understand what I was going through.

Additionally, the new single features a brand-new promo video. I imagine that everything was shot during the COVID pandemic. How much challenging was it?

Our music videos thus far have always had extras that help act out the story, but it wasn’t responsible to have a big group in the studio we filmed in. That change made us focus on driving the story of the video in a new way that we have never done before. We also usually shoot live shots of the whole band in the same frame, but we had to separate ourselves into our own shots this time to keep safe distance.

This of course was paired with standard protocol in the pandemic, such as masks, sanitation, etc. Believe it or not, I think filming in this situation allowed us to explore different creative choices since we couldn’t stay in our music video comfort zone.

In the video, there are present some clocks ticking. What they symbolize and how they relate with the song’s lyrics?

The clocks are pocket watches, which are used as a common symbol for hypnotism. We wanted them to show the loss of emotional control that can be felt when in that desensitized, numb state. Like the mind is in a haze and not responding to stimuli.

If we exclude the singles “Desensitized” and “Something for Me”, the latest full releases dates to 2018 with the EP “Too Afraid to Say”. Would you mind recalling us about its recording process and so far, how it was received by press and fans?

The release of “Too Afraid to Say” was very exciting for us. We didn’t know that we had the ability to write songs like that. I’d like to think it was the time when we began to discover our “sound” and develop goals for our music careers. It was also the first time going to our producer Rob Freeman, who we still record with this day.

He helped shape that record a lot and continues to provide a solid voice in our musical creations. “Too Afraid to Say” really changed the course of this band and brought a bunch of new listeners on board who continuously support us through it all.

What the future holds for The Ones You Forgot?

So, Jenna, we’re almost at the end and with this please be free to say hi to your fans and your readers. Thank you so much for this interview.

Thank you so much for the interview and thank you to everyone reading this! It’s been rough out in the music world but it’s publications like this that keep the music alive.