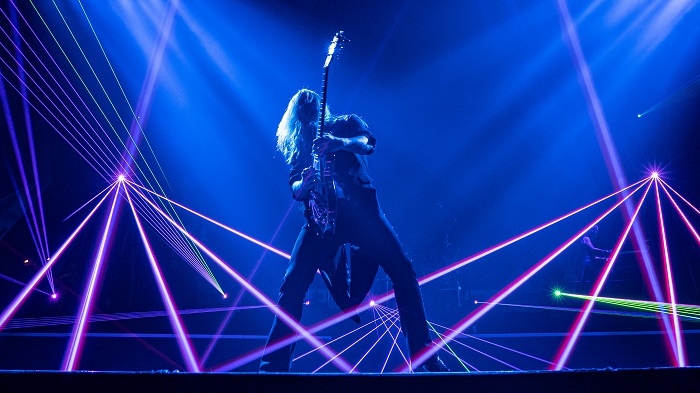 When every Christmas comes, it brings with it its traditions and one of this, it’s for sure Trans-Siberian Orchestra‘s music and its extra-luxurious arena shows. Of course, due to the ongoing pandemic, this year it won’t happen but the band promised to the fans a special live streaming show. Well, if the TSO‘s extravaganza won’t come at your city, the band will make sure to be welcomed in each fan’s house for a few hours of pure Christmas spirit. In order to learn more about I have chatted with one of the long-time members of the band, the keyboardist Mee Eun Kim. Enjoy!

Hi Mee Eun, welcome to Femme Metal Webzine. How these precarious days are treating you?

Hi Miriam, I’m very good, very nice to talk with you and thank you for having me on your magazine. Given the circumstances, I’m doing good. Everyone has to get used to the new situation and I’m just grateful that I can play music again together with the Trans-Siberian Orchestra.

As every Christmas season, there few traditions of which we cannot do without and one of them is the traditional tour of Trans-Siberian Orchestra. Due to the circumstances, how to you feel to play in a streaming for the first time?

Actually, I’m really excited to do this because it’s something new not only for the band but for our fans too. We were already prepared that we wouldn’t have toured for the obvious reasons and when we had this idea of going on stream for the live concert, everybody was thrilled. In this manner, through this intimate set-up, we can be close and personal with all the fans. Of course, everybody has the view and the sound of what we have been in very different setting.

You just mentioned the words “different setting” and there was something I wanted to ask about the live stream event that it will feature some re-conceptualized show based on the “Christmas’s Eve and Other Stories” album. So, first of all what do you mean for re-conceptualized. Then, which details can you share about it?

Without giving too much, if you know our live concerts. Have you ever been to one of our concerts, Miriam?

Unfortunately, as a European citizen, not yet.

Awww, because we have been to Europe, including The Netherlands, for our “Beethoven’s Last Night” tour which was a non-Christmas show. So, I was wondering if you ever seen us before because we are really known for the big arena shows with a big production. Of course, people love our music which is a very special rare type of crossover between rock, R&B, Gospel and Broadway with beautiful stories surrounding it. Additionally, we are very much known for the production, the stage, the rock show, the fire, the lasers and the huge arena shows.

However, with the live show, we’ll be obviously more intimate because we’ll perform without the audience, in a studio and strictly quarantined since since each of us will be tested before we travel, when we arrive there and during the rehearsal too. So, every few days we’ll try to be safe and naturally, it will be quite a different concept and setting. Also, the stage won’t be grand as the arena. To be honest, I’m also very curious to when I’ll arrive to the studio. [Laughs]

Considering the tradition that lies beneath TSO’s music, show and grandeur, I’m so curious to know what would be the following feedback?

I think that people who didn’t see a TSO’s show, they might think that what we are about to do it’s our official setting. Tho’ for what I’ve understood, it will be much more intimate not only for the sizes but also for the material played which will be “Christmas’s Eve and Other Stories”.

In this case, everyone will have a front sit and be together with all the fans from all over the world because it will be live-streamed not with just the local city that we are visiting. The live streaming brings different advantages and one of this is, to hopefully good news to this difficult year to your home by bringing the whole scenery and production on which we are working on.

In your opinion, how the album “Christmas’s Eve and Other Stories” reflects on this historical period that we are going through right now?

For my understanding, Christmas relates so much to home. And home, it defines a lot with family for a lot of people. Also, I think that the story (present in “Christmas’s Eve and Other Stories”) [is] about the little girl who is away from home and she finds her way back home for Christmas is the perfect story for this moment.

However for me, that I also lived abroad whole my life away from my parents since I was young, during this period, I completely realized the value of the time that you spend with your family and what is precious. Personally, I think that how people can relate even more this year about being at home, being together with your loved ones during Christmas time.

If for the American audiences is more than a tradition to attend a TSO’s show during Christmas period, instead for the European one is more than a rarity to have the chance to attend one of your shows. So, why throughout this long-lasting career of TSO, the band has toured less in Europe and, also which are the difficulties leads to this?

You know, we always want to visit Europe so much and we love to expand our audience. The reason why behind this I think is relates to the American tour schedule. Consider that, we start to tour after Thanksgiving until the end of the year and America itself has so many cities and states that we cannot cover [laughs] all of them. If we should to take in consideration even to tour Europe, we would have to give up a lot of American cities.

Maybe, it’s what I’m assuming. Nonetheless, we have toured Europe with “Beethoven’s Last Night” Tour and that was possible because it was scheduled during a non-Christmas period. Surely, we’ll coming back whether it’s a Christmas show or a non-Christmas album. Anyhow, we always speak about Europe. The issue is that we have so much cities to tour in the US which it complicated everything.

About this, I also know that in America you schedule two shows in a day: one is a matinee show around 1 PM and the other one a soirée around 7 PM…

Especially on weekends, we have two performances at day and this shows how much people want to see really our show. And all this happens because if we stay two days in one city, we cannot cover another one. In the end, we had to opt for this solution, in order to give the opportunity to many people as possible to attend our shows.

Another amazing news for European audiences, is that TSO’s back catalogue will be soon digitally available on streaming platforms. Looking back on what everything TSO has produced and published so far, how does it feels to have achieved so much and out of this evenement, what are your expectations?

I’m just grateful that TSO has been expanding so much. Considering that I’ve been part of this band for 20 years, I’ve experience how we started with 2000 places in a theatre such as the Beacon Theatre in New York. I still remember my first gig with them there, it’s a really famous location and it was really crowded to playing in there. Then more, more and more people loved us. Tho’ our producer Paul O’Neill used to say: “One day we will go play the Madison Square Garden” as a New Yorker artist, and playing there was one of his dreams.

Actually, in 2004, this happened and we realized how much the band has grown. All the ideas, all the crazy fantasies that he had, we kept fulfilling them. And that, it’s thanks to the fans that love us. After the Madison Square Garden, we started playing these huge arena shows all over the US and we also managed to go to Europe. So, it’s a very special kind of music what we are playing with the Trans-Siberian Orchestra and in my knowledge, I don’t know any other band that has such a versatile style of music all condensed together.

It could be that it’s not everybody cup of tea because of what I said before but the American fans tend to be really clear with the musical genre that they like. As I mentioned before, in our band you have a combination of all kind of music, style, performances and personalities. Instead, for me, I’m so grateful to be part of something so unique, something that keeps on growing and that keeps on challenging ourselves in something new, including this live streaming.

Again, what it means to me, it’s something that not all the musicians will get to experience. Especially, to be playing a live streaming in this particular year and be able to reach and visit everyone in the world means a lot. I just hope that everyone will appreciate our intention and music which is also a gift for them to share it.

What the future holds for Trans-Siberian Orchestra?

We are hoping to get back on the road as soon as we can [laughs]. Of course, all the musicians wish the same right now but let’s hope that the situation get better soon and we dying to meet the audience. We miss our live concerts so much, not only I do miss my band members but I miss out there performing for the audience. The noise, the energy. You know, I’m very grateful that I’m working a lot in the studios with other musicians creating, but it’s not the same when you’re on the stage and you are interacting with the crowd.

Maybe, there’s in the pipeline a new release?

We’re always working on something, yes. Now, we have the time, so there’s always something going on in the studio [laughs].

So, Mee Eun, this was my last question and sadly, we are almost at the end. Please with this be free to say hi to your fans and our readers. Thank you.

Thank you so much for having me and I’m really grateful that can able to play music our upcoming live streaming on December 18th. Also, I’m really looking forward to play live music for you guys sometimes soon in Europe. Please stay safe, be happy and keeping on rocking. I’m so looking forward to meet you in person, too. All the best.