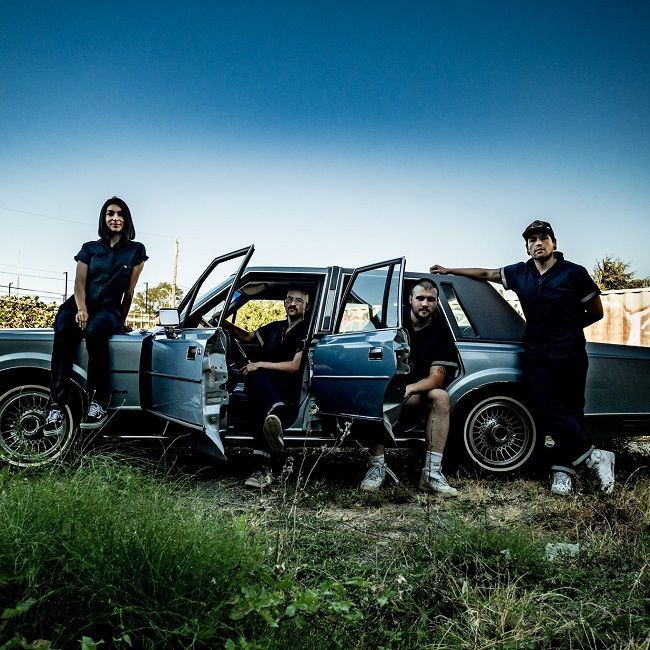 With their preponderant noise rock/hardcore metal, Seattle Washington-based band Turian scrouge our ears with their new full-length “No More Human”.

For this LP which was recently released by Buster Room Records/Wiseblood Records, the quartet has introduced their new singer, Vern Metzli.

For this occasion, I had the chance to ask a couple of question to them about the new album and the band’s collaboration.

Dear Vern, welcome to Femme Metal Webzine. How are you? How is this period treating you?

I am fantastic! And it is great right now, and I feel excited and inspired to work on new music and do shows!

They recently joined Turian back in 2020. When did you and the band first meet?

I met the guitarist Ryan in the middle of the pandemic. And we became internet pals. I was a big fan of the band when I heard them and expressed interest in playing in a band. Eventually, Ryan and I started working on a grind project called “Metztli”. And I joined Turian when they were looking for a new vocalist. I liked their self-titled album, and I wanted to join them in making music.

“No Longer Human” was released on 5th August. What can you share about its production?

Some of the music was already composed, and it was my job to come in with new lyrics. Subsequently, we reworked the songs at different times and produced 2 or 3 demos of the whole album. Some of the songs had completely different lyrics and concepts before the final record sessions. This was my first attempt at making music with a band. I had never been a “musician” before joining Turian, so these past two years were a lot of learning how to collaborate with the other band members.

Because “No Longer Human” was initially composed throughout 2020, how the COVID pandemic has impacted overall?

Since I had never actually done metal-style vocals before, I will say that the pandemic gave me a lot of free time to work on learning how to do it. It also helped me refine my songwriting and lyrics. I get most of my ideas from literature and short stories, so having the extra time to read helped too. We managed to meet up and play together safely because all four of us cut all other contacts from other external people.

Personally, which meaning holds “No Longer Human” as an album for you?

The songs I wrote on “No Longer Human” have a common theme of disconnection from others and with your mind at times. It expresses the horror of alienation- whether it is self-imposed via technology and reckless behavior or whether it is from external systemic forces that dehumanize us by design.

The new full-length feature producer is Nicholas Wilbur, who followed a recording session at The Unknown studio in Anacortes, WA. Which is the best lesson learn during this experience?

It was my first time recording in a studio setting. So far, the best advice I got is to have fun and trust yourself and your bandmates. It can feel pretty intimidating when you are alone doing vocals, and it is easy to be harsh on yourself when you’re on a time limit. In the end, it is essential to relax, trust yourself and be confident in your skills.

Despite the pandemic, what is in the pipeline? Which are your plans?

We are hoping to tour on the new record. And we are also in the early stages of working on a new album, which I am very excited about it. Plus, we have some other fun projects in the works.

So, Vern, we are at the end. Be free to say hi to your fans and listeners. Thanks so much for this interview.

Thanks so much! Thank you to everyone who’s checked out our music. It is inspiring to hear that people are enjoying it.