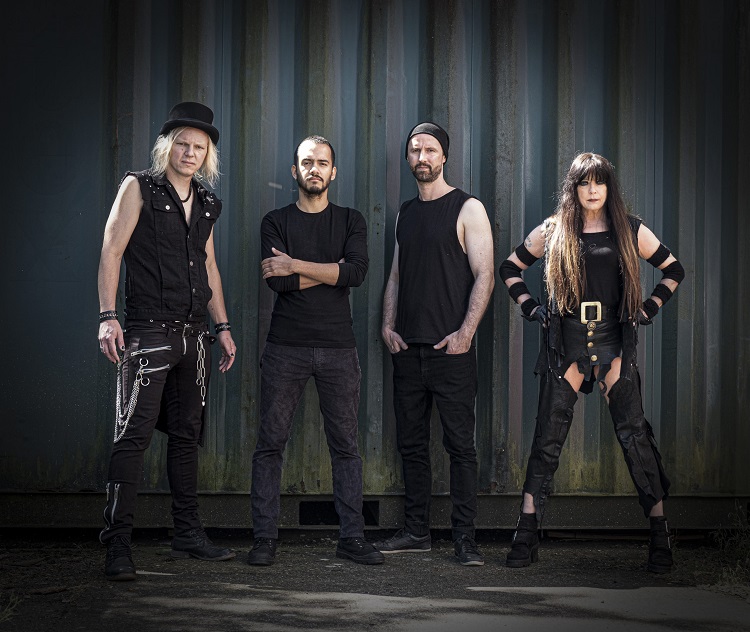 Germany’s Velvet Viper is ready to comeback with a brand new LP called “Cosmic Healer” via Massacre Records. Besides satisfying the old fans of Zed Yago, the band featuring the powerhouse vocalist Jutta Weinhold will satiate the hungry of many heavy metal warriors. Enjoy!

Hi Jutta and Holger, welcome to Femme Metal Webzine, how are you and how are these precarious times treating you?

Holger: Hi there, personally I’m fine. But this situation with the Corona is terrible for metal bands. And, it has been exactly one year ago the last time we have played on stage.

Jutta: We are just waiting to come back and play live our music and be on stage. Of course, it’s a sad situation but the there’ll be time when everything will be back to normality.

Until then, we’re keeping ourselves busy by playing some acoustic show on which we perform both Zed Yago and Velvet Viper songs. In the end, everything is better than nothing.

The new album “Cosmic Healer” follows your lastest one, released back in 2019. So, on this matter, I was wondering to learn more about its general production. When did you start to collect the first ideas for it?

Holger: Immediately after the release of the previous album, I’ve already started to collect and record riffs and ideas at home. But after we discovered that we couldn’t play live anymore, the process eventually sped up. It wasn’t in our plans to be so fast with it. Everything happened between last spring and summer when there were still few cases of Corona.

Jutta: We recorded in a big studio where it was possible to be socially distanced. Indeed, it worked out. But what else is important, it’s the fact we have a lot of lyrics and songs to work on. Indeed, this help us to keep us active with our minds and not get frustrated. A good song, riff or lyric makes us forget about the bad things  you just focus on that because they keep you alive and are the ones that you love the most.

The album title itself is quite straightforward. But who’s the cosmic healer that you mention here? And, does it connect to the lyrics?

Jutta: Actually, “Cosmic Healer” is about the cosmic energy and it relates to old Egyptian deities Isis and his brother Osiris and Egyptian mythology. According to the Egyptologists, the ancient goddess Isis has the power of a man and she gained that from the universe. Indeed, she was the first woman on Earth who became a leader.

Jutta: I always liked ancient stories like those one. Indeed, there are plenty of rock’n’roll songs about this matter. Even if are 40 years that I play metal music, I never get tired to add my contribution in this fantastic world. I think that metal music is strong enough to manage such honest and true topics. It doesn’t have to be about always rock’n’roll parties bullshit.

So, the previous album “The Pale Man Is Holding a Broken Heart” dates back to 2019. However, if we consider that Velvet Viper is back since 2018 with a new line-up, and that “Cosmic Healer” marks the third one, there is a path to follow to get the ball rolling.

Holger: On the first two album of this band’s new era, we tried to feature more elements from the golden era of Jutta’s old band, Zed Yago. But now, we are trying to, and quite successfully, play our style.

Jutta: In the beginning, Holger was heavily editing my songs because they had too much words. But this, totally improved “Cosmic Healer” and the quality of our music. Also, it helped me to polish my skills as a songwriter. In the end, it’s a process learning to work with your band mates and to reach a mutual decision.

About Zed Yago which were previously mentioned by Holger, last year the band’s first two album “From Over Yonder” and “Pilgrimage” were re-released. However, these LP were released under the Velvet Viper moniker, why? And, which meaning does hold for you these 2 releases?

Jutta: You know, Zed Yago was my baby. But, almost three ago, we incurred in a problem between the band which caused me a lot of stress. Unfortunately, what happened is that I wanted to play Zed Yago’s music with other musicians. But, due to legal issue, I didn’t have a private copyright on the name and I lost it. Hell came down on me and I was nearly dead. It was a terrible time because my baby died.

Even if I lost the name, I didn’t lose the rights on the songs. Indeed, many fans 30 year later, asked me about re-releasing that material. Of course, Massacre Records was enthusiastic to support me but I had still a problem about the band’s name. Lastly, we have opted for use our current name’s band. It’s a bit bittersweet and in hindsight, something is better than nothing. Anyway, I’m happy that we have managed in this manner because those songs are special to me and thy recall me a special time too.

Holger: The CDs versions of these two full-length were unavailable for more than 20 years. As mentioned before by Jutta, there’s a serious litigation and sincerely, we didn’t want to open this Pandora’s vase. Indeed, this was the only way to make available such music.

Jutta: In the end, I think the music is more important than the name.

If we consider that originally those two Zed Yago albums were released between 1988 and 1989, and now we are in 2021. So far, which is the feedback that you have received by the youngest generation?

Jutta: You know, I call myself a really rock’n’roll Indian. But, in the band, my mates are younger, so, it’s easier to get also a different perspective. Unfortunately, the youngers nowadays are into another genre of music which is absolutely not related metal. So, our fanbase is mostly aged between 40 and 50 yes old.

Holger: Sadly, the younger generation at our shows isn’t so numerous but they have the chance to listen and see us in stage during the festivals which it can turn out quite the other way around.

Jutta: Indeed. Most the times, entire families are coming to our shows and the reaction of their daughters and sons is of pure amazement and surprise. And since then, they became our fans. But, you know, here’s what it is. Actually, I come from the 60s and our parents didn’t like the music that was produced during that era. And, the same situation is today. Personally, I don’t think that a specific musical genre has to forcibly find always a place.

On the other hand, my opinion is that every generation should have its own musical genre. I’ve been a musician since 1969, which is more than 50 years of activity and for me, the meaning of rock’n’roll is having and being in a band. And not, have a solo project. Unfortunately, Zed Yago’s outcome wasn’t one of the best and I had some bad luck but I’ll be always here for my old (and new) fans.

“Cosmic Healer” represents the third album of this new revamped line up. I was curious to learn what triggered your comeback after so much years from the latest release in 1993?

Jutta: You know, it’s the feedback I receive from the fans here in Germany. What I simply do in play live and see their reactions from the stage. That sparkle and shine in their eyes bring me back to my youth and all this give me the power, the energy to keep my music alive.

Holger: Before releasing our comeback, we have toured together. And, during those concerts, we have introduced some Velvet Viper unreleased songs but also some oldies like Zed Yago’s. Essentially, I don’t remember whose had the idea to start again but what I’m sure of, it felt the right moment to do it. Also, our producer Kai Hansen motivated us to begin with this new adventure.

Jutta: I’ll add one more thing. During my long career, I had a lot of guitar players. Thought, when I met for the first time Holger, I feel immediately that like he’s the right one to establish a fruitful long-term collaboration. We share the same mentality and peculiarities; we are on the same wavelength.

So, Jutta and Holger, unfortunately we are at the end of our chat. I hope you have enjoyed my interview. Thank you for the time that you have dedicated me. Now, it’s Your space for the last greetings.

Jutta: Thank you for talking with us and I say hello to your readers and our fans. We hope to see each other again soon.

Holger: Thank you for having us and please, everybody check our new album “Cosmic Healer”.