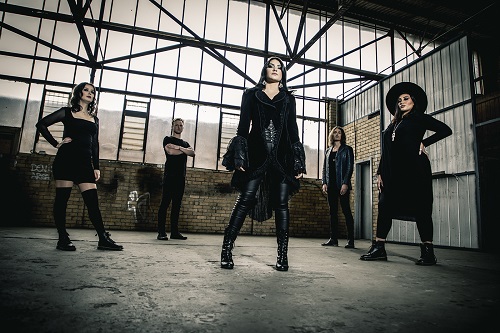 We are so used to attribute the origin of Symphonic Metal in Europe that we completely forget in distant lands, there are slowly coming out some interesting acts that might surely compete with the most blasoned ones. In particular, that’s the case of the Australian band Victoria K who that has recently released their début “Essentia” via Italy’s Rockshots Records. Let’s discover more about it in this short but direct interview. Enjoy it!

Hi Victoria, welcome to Femme Metal Webzine, how are you and how life is treating you in this precarious days?

Hi Miriam, thank you for having me on Femme Metal Webzine, it’s an honour. Life is good and we are still in isolation here in Australia, but we are coping well. I hope you are well also.

For our readers who aren’t familiar with you, would you mind to recall how your musical journey began?

I started dancing from quite young and was involved in Musical Theatre Productions through my dance school. They had a singing coach there, so I started singing lessons as well. I think I was about 5 years old. I very quickly realised I was a lot better at singing than I was at dancing. I focused more on my singing from then on. I went to different vocal coaches and singing schools over the years, learning different vocal styles. I’ve now been learning Opera for a few years. I also play the piano and the viola, and I’ve been composing and writing music for many years now.

If I remember correctly, 2016 marks your debut with the single “Monster”. What do you remember about its general production?

“Monster” was my debut single and it was many years in the making. By that time, I had been working with my producer Lee Bradshaw for some time through his development program and that song was the natural extension of the work I was doing, (and still am doing), with Lee. I had recorded many songs before “Monster” (all covers) and had spent countless hours in the studio before recording “Monster”. Even though I was very familiar with the studio, this recording was extremely different to all the others. It was the first recording of a song that I had written. It was my work and I meant a lot to me. I felt a “strange” pressure that I had never felt before. I put so much pressure on myself to do my best and I thought about it so hard, that it took a really long time to get it right. I had to learn to let go of that emotion and I had to almost forget it was my song, so I could sing it at my best. That was a really huge lesson for me.

Then, in 2019 you published the follow-up single “Lacuna” which was digitally distributed in Australia and in New Zealand via Warner Music with which you gain higher media praise. Would you like to spend a couple of words about its thematics and also, did you expect such a reaction?

It was so amazing to release “Lacuna”. To have Warner Music distribute the song through Australian and New Zealand was an incredible honour and privilege. “Lacuna” was the catalyst that secured us the support act for Eluveitie in Melbourne. Being the first single off our debut album “Essentia” it has a very special place in my heart. “Lacuna” is Latin for “missing space or missing page” and the song discusses the gap or hole we all feel in our lives and hearts. The lyrics talk about the feeling that “something is missing” and the search we go on to fill that hollow in our souls and find fulfilment, peace and happiness. Some people find it.

You never really expect a great reaction, I guess you hope for it and its always wonderful when so much love and positivity comes back to you. It’s such a beautiful feeling and I am grateful to everyone that takes the time to listen to our music. The truth is when you put out your work, you just don’t know how people will receive it.

Recently in April you released the debut album “Essentia” via Rockshots Records. What can you share about its overall recording process?

The recording of “Essentia” was actually quite intense. The recording process started early in the year, well before “Lacuna” was released, and it was always the idea that “Lacuna” would be the lead single off the album. The process started with demo’s of nearly 20 songs, which we listened to on repeat for weeks, before making the final selection of 10 songs. Lee and I then went to work creating all the musical parts for all the instruments, recording the instruments, engaging the Budapest Scoring Orchestra for all the symphonies and also having the honour of working with Michalina Malisz of Eluveitie on “Shroud of Solitiude”. She was so amazing and she recorded her parts just after their Australian tour. Once all the musical elements were in and recorded, I got into the studio to record my vocals. I was in the studio daily and it took a little over two weeks to record all vocals for the tracks. The musical stems were sent off to the USA for mixing and mastering by Michael Weurth of Long Island Sound Studios, NYC. “Essentia” really is a global project and has come together through the amazing work of people from all over the planet.

In the beginning everything started by being the sole member of this project. When did you realise that all this could morph into an actual band?

The band really came together in order to support Eleuveite when they toured Australia. We all got along so well, had such a great time together and generated an incredible response from the crowd, that it really just made sense to move forward together. The energy generated during the show was incredible and everything just clicked.

“Essentia” was recorded and produced together with Lee Bradshaw. How was working with him and what can you recall about this particular experience?

I’ve been working with Lee since I was about 9 years old through his Artist Development Program. He has been instrumental in my musical growth. We get along so well that we are happy to argue/discuss all things music. We understand each other and I don’t think there is anyone that would understand my voice and my music better than Lee. I feel extremely comfortable with him and that made the production and recording of “Essentia” really enjoyable. Even though we don’t always agree on things, I trust him fully and he allows me to express myself how I’d like creatively. I was positively impressed by the title album.

As a word, “Essentia” is quite important and really meaningful. In the end, what do you want to tackle and how does this word reflect on the entire album?

“Essentia” is Latin for Essence. I wanted to explore the feelings people have and what makes people do what they do. So, the essence of people. It’s about the world around us and how we interact with that, until we are finally struck by that moment of sonder. This is the profound feeling of realisation that everyone, including strangers passed in the street, has a life as complex as one’s own, which they are constantly living despite one’s personal lack of awareness of it.

The song “Shroud of Solitude” features the participation of Eluveitie’s Michalina Malisz. How was this collaboration born?

Michalina is such a beautiful person and such an amazing musician to work with. I really wanted folk and Celtic sounds on the song “Shroud of Solitude”. We were discussing this just as we had been announced as the support act for Eluveitie. I mentioned that I love the Hurdy Gurdy and would love it on this track in particular. Next things you know Michalina agreed to be a part of the project. She is an incredible person, so giving and kind and just lovely to work with.

In normal times, this question doesn’t procure any embarrassment, but I feel anyway obliged to ask you if you had any plans to promote live “Essentia” and instead, how your plans changed?

We had plans to tour Europe in promotion of “Essentia”. Obviously with how things are now that can’t be done and probably won’t be possible until 2021. We are however looking at other ways to play live for all our fans and supporters. Luckily, the internet provides ways for this to happen. We are hoping to have some more announcements very soon about live shows so stay tuned for more information shortly.

So, Victoria, we’re almost at the end and with this please be free to say hi to your fans and your readers. Thank you so much for this interview.

Thank you so much Miriam and Femme Metal Webzine for having me. It was awesome chatting with you. A huge thank you also to all our supporters and fans. We are all so grateful for your continued support and we hope to be out touring and seeing you all again soon. Please stay safe and healthy in these difficult times.