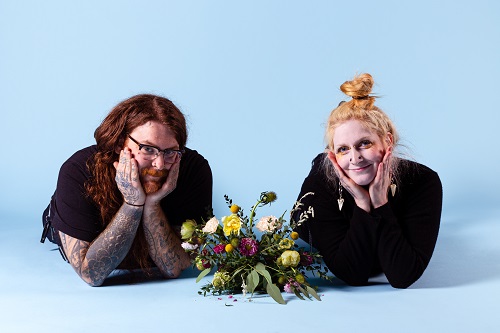 In these precarious times, I’m always searching some music that can heal my feelings of hopelessness and anger. Throughout this path, I’ve encountered the lancinating pain of LINGUA IGNOTA and the passive aggressive anger of VILE CREATURE. Their new full-length “Glory, Glory! Apathy Took Helm!”, which was released back in June via Prosthetic Records, has completely and emotionally overwhelmed me. Let’s read together through the words of this experimental doom duo, how their opus come into existence. Enjoy!

Hi Vic and KW, welcome to Femme Metal Webzine. How are they and how life is treating them in this precarious time?

Vic: Pretty good, I guess. We’re pretty positive people and we have each other and so, we’re not alone. Also, we have a lot of animals and we’re busy with work and all is good here.

For the readers that are still not familiar with VILE CREATURES, would they like to tell us how this adventure started?

KW: Our band started about 6 years ago. Vic wanted to learn how to play drums and I played a bunch of instruments, so I mainly taught them how to play it. From there we picked up a week later and we started to play. Vic was caught on it and incredibly quick which was intimidating. Then, 3 month later, we have written down our record and we keep going on from there. The whole band has been just listing down a bucket list of the list of things to do like “I want to play a show” and “never been able to record”. So, we’ve been trying to do all of it and now, it’s just both of us having fun.

Vic: It’s a two-piece. So, I play drums and KW does guitar. We both sing the harsh vocals and I guess, you can call us an experimental doom band.

On June 5th, Prosthetic Records released the third album “Glory! Glory! Apathy! Apathy! Took Helm”. Using as a reference the album production, which details they can share about with us?

KW: Everything was recorded here in Hamilton, Ontario, Canada at the Box Card Sound Recordings. Adam Tucker, who is the owner and operator of the Signaturetone Studios in Minneapolis, Minnesota drove 16 hours for recording here at home. He’s always the same person who recorded the last record and he’s worked with since the beginning. We recorded in total 3 days in the beginning of February 2020. The owner of Box Card Sound Recordings, Sean Pearson, has also helped with the engineering and played some instruments. And Vic lost their voice.

Vic: I lost my voice [laughs]

KW: Vic lost their voice after singing most of the songs but fortunately, the first song on the LP “Harbinger of Nothing” was originally recorded one year for a compilation called “Metal Swim 2”. After its publication, we’re aware that we wanted to use it in our next album so we kept the vocal track and we just recorded the rest of the instrumentation.

Vic: Thanks Jesus, because my voice was completely shut and while in the studios, I was trying hard and nothing was coming out. [Laughs]

KW: It was pretty funny and yeah, Laurel Minnes and her ensamble Minuscule, which is a 12 piece choir played on the last two tracks as well as Tanya Byrns, from the band Bismuth from England who played piano and organ. It was an awesome cathartic experience.

About cathartic, there’s a sentence of which I’m really fond of which can be found in the press release. Surely, in some way it embodies both three albums and it goes further:”The debut is about identifying the source of pain while the second and third one is about smothering fantastic escapism copy at home.” Can we say that “Glory! Glory! Apathy Took Helm!” represent the final step of a long journey?

Vic: I don’t think it is the final step, at all. It’s just an ongoing process to work with your own apathy when it comes to the world and figure out ways to move on from there.

KW: The final step is dying because everything else you are doing from the second you become cognizant as a person and try to figure out the place in the world and how to manoeuvre through it. It’s very much like everyone’s experience…

Vic: … we’re definitely an existential band [laughs]. I was looking at the liner notes when we just got the vinyl and I’m not surprised by it at all, the first sentence of the lyric is “we die” and in the last lyric of the record is “when we are dead”. I gotta admit that we’re a little obsessed with that thought [KW laughs] and it reflects something that the band has been doing.

In which way “Glory! Glory! Apathy Took Helm!” has pushed the boundaries of their own creativity? Because I saw there was a sort of journey throughout these different states of mind such as pain, escapism, and cathartics.

KW: I wouldn’t say that pushes us to the limits, I would say, and connecting with the previous question, lyrically and personally I’ve been moving through a pretty linear train of thought from our first record to now. I’m not sure if we have lyrically and thematically pushed to the limit but we definitely went from, like in our last record “Cast of Static and Smoke”, being purely science fiction on which a story was based on it and consequently, creating our world from being intensively personal. I don’t know if we would ever be able to hit the limits in terms of creativity and thoughts like on “Cast of Static and Smoke”. However, we were definitely dedicated to consistently self-reflecting and put out new and sustainable ways to personally move forward.

How can we contextualize the album and the cover artwork with the song contained inside? Personally speaking, I find the cover artwork really striking and I love it. For me, it does also express the lyrics themselves. But, I would like to know their opinion about it?

Vic: Sure. Thanks for the kind words about that. We are really proud of the art. For me, I wanted to create something that had a surrealist approach and I like that type of art because it has the ability to be subversive. Whoever is looking at it, it can create new pathways in their brains to think differently. It’s not about drilling about the right idea and you are supposed to watch in a certain way and have a defined meaning about it. Instead, it is supposed to give to the ability to give their mind. When it comes to art, it’s really important.

If we should closely examine “Glory! Glory! Apathy Took Helm!” with your previous release “Cast of Static and Smoke”. Which are the main differences that they can notice?

KW: I feel like the difference is between night and day. There are both heavy and slow records but it feels like everything else is different. From the artists that have collaborated with us, the instrumentation used to the performance and production. It’s obviously the same band but all of it, it’s very different.

Vic: It’s funny that he sees the difference between the time and space of when the material was created.

KW: To start with “Glory! Glory!” was co-written with me, we had the idea to write a full choir piece while going through the record. It has always been an intention and it came up while listening to a bass and a guitar structure. After this session, me and Laurel had an intense marathon which resulted in the creation of all the vocal melodies and how they would globally interact in the song. Actually, “Glory! Glory!” and “Apathy Took Helm!” were written as one but they were split for the record because some people are impatient and they don’t want to suddenly to an orchestral piece before going something heavy. Also, Laurel worked with us on the “A Pessimistic Doomsayer” EP which was released 3 or 4 years ago. We always knew that we wanted to work with her in the future once again. However at the time of the EP’s publication, she settled up her choir Minuscule which features former professional singers from all the levels. Anyway, it was wonderful to work with her again and at this point, we consider her part of our extended family. As far as meaning goes, it’s something we don’t try to speak too much about because we want people to take their own experience without external conditioning.

Unfortunately we’re dealing with some difficult and complicated times, I would like to ask them how is going on with it and how they are coping with all this? Usually, I know that when a release gets planned afterwards there’s a tour too.

Vic: We kinda see it coming because in February we had tons of tours planned. If everything was according to plan, we would be directed to the West Coast to Seattle and down to Texas and then back up to the north. I’m really sad about it and I completely understand the situation of a lot of people who are part of the music industry. Mostly, most of their income has been stripped away and they don’t have any positive news about when everything will restart as before. Being uncertain when it comes to your income is very scary, we are very fortunate because this band is lovingly not our full-time job. So, we’re not worried in that sense, however it remains unfortunate the fact that we don’t know when will be able to again play music live. In a way, we just kind of take it in stride and we are happy that we have our health and all that matters is that everyone is safe.

Actually, this was my last question. I hope that they enjoyed my questions and the last thing that leaves me to ask is please be free to say hi to their fans and our readers. Thank you so much for this interview.

Vic and KW: Thank you so much for the questions and for listening to the record. That’s all that we can hope for. It’s a weird time in which we are and most surely in which to publish an album but we just hope that our intentions are clear. People are in need of music and the fact that people reached out to us in the past and during this release to express their enjoyment, that means the world for us. Thank you so much.