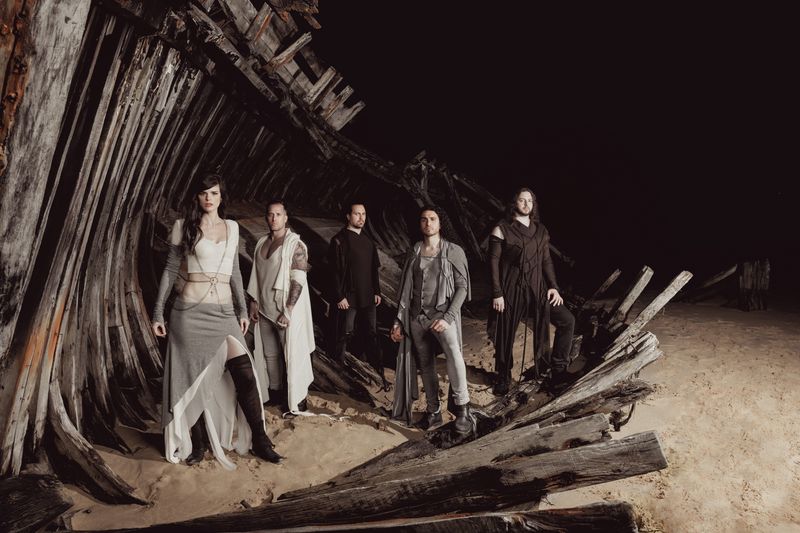 “Wanderers” is not only the eighth album by the Austrian symphonic metal masters Visions of Atlantis nevertheless it does represent a new beginning and a breath of fresh air thanks to the new vulcanic addition in the line-up, the Italian singer Michele Guaitoli. Without further ado, I suggest to literally dig in this amazing interview with both Clémentine and Michele!

Welcome back to Femme Metal Webzine Michele and Clémentine, how are you and how life is treating you?

Clémentine: Hello! I’m good! Very busy this Summer with an intense festival season and the upcoming release of our new album!

Michele: Hi! Everything’s great: we have a lot of great things happening around us, from the new album to a lot of shows…life is definitely treating us well!

After the chart breaking album “The Deep and The Dark” released back in 2018, Visions of Atlantis is on the verge to release their new seventh full-length called “Wanderers” on the 30th August 2019. What you can share about the overall album process?

Clémentine: A couple of months after the release of “The Deep & The Dark”, when we realized how well it was perceived by the audience, we decided to start working right away on new material in order to maintain our presence in the scene, to stay active, to get back into this virtuous cycle of making an album, promoting it, going on tour, then making another album etc. The process went very smoothly, we kept working with the same producer, Frank Pitters from Silverline Music, so we naturally and quickly came up with all the songs that feature on “Wanderers”.

Michele: On my side, I am really excited! As I’m sure you know this is my very first album with VoA, I’ll have to challenge the feedbacks of the fans for my first studio appearance but if everything will go as smooth as for the lovely response I’ve received during the tours, it can only be great. Let’s see what happens with finger crossed: we all put our heart and soul in every note of “Wanderers” and at least I am sure that this will be noticed!

From the general layout of both your dresses and the cover album, I can sense that “Wanderers” might be perceived as a concept album. Well, if it happens to be mistaken, be free to correct me and also include more information about the provided lyrical concept in the album…

Clémentine: It’s not a concept album so to say. The songs aren’t really interconnected and we don’t tell a story. What we do share however is a strong and coherent message: “We are the Wanderers” and we want to take you to the most interesting, profound and memorable journey: the one that leads to self-discovery. This album reflects our mindset, what we go through on a personal level and it was very important for us that outfits, pictures, lyrics and cover artwork all went into the same direction, sharing the same idea.

Back in 2018, the new Italian singer Michele Guaitoli was announced as a replacement for Siegfried ‘Siggi’ Samer. How the addition of Michele in the line-up was beneficial for the band?

Clémentine: Meek is a wonderful person. Not only does he have a strong, powerful and colorful voice but he is a very humble, positive, enthusiastic and passionate. He’s committed 100% to become the best musician and bandmate he can be and his life is all about music. He brings us his Italian warmth, a lot of high vibes and since he is a professional sound engineer, he also brought his expertise on this level to the band, which was seriously lacking before. I am so happy that we found him, I couldn’t have imagined Seigi’s replacement to go so well.

Michele: Can I publicly say thanks to Clemi for her words? I am really touched and I couldn’t be happier of being part of this family…and a great thanks goes to Siggi himself as he in person asked me to jump in for him…

Now please indulge my curiosity, for both of you if we try to conceptualize the meaning of the word wanderers. In truth, who do you think are these wanderers nowadays?

Clémentine: We started looking deep inside ourselves. This album is about us, our own chase for freedom, independence, truth, awareness, evolution, and growth. But I believe the Wanderers of today are these people who know they haven’t found themselves yet, their route, what they truly want to achieve in their life, what makes them happy and give meaning to their existence. I guess a lot of people fall into this category. We wish to tell them that even though they might go through a dark period of times, it is necessary for them to experience this so that they can learn, grow out of it and become a greater version of themselves. The Wanderers have started to embraced movement and change, and this is what life is all about.

Michele: We are the wanderers. I am, Clemi is, you are, everyone is. A Wanderer is someone who’s facing a journey, a long journey that can be a real one, or an inner journey for personal research. We all are part of this. We are as musicians, always on the road to share our emotions, we are as men and women facing every day’s duties in the journey of life…- and everyone has a story to tell regarding his very own journey. There are people fighting to save this world, people fighting to save other’s lives, people fighting to reach their goals…every single one of us is fighting his own battle, traveling through his own world…wandering.

This upcoming release was anticipated by 2 two great singles such as “Heroes of the Dawn” and “A Journey to Remember”. Which additional information you can share about these two specific songs?

Clémentine: These two songs could actually be connected in a way by their lyrics. The two characters singing in “A Journey to Remember” could be the two lovers we talk about in “Heroes of the Dawn”

Michele: “Wanderers” is an album full of different colors. We’ve been exploring a lot and we really wanted to push ourselves forward, not only technically as musicians but also emotionally and style-wise. Indeed, with these two songs, we wanted to show two different styles. Expect even more from the album and the next singles!

Recently, during the last edition of the Bang Your Head festival in Balingen, Germany, Visions of Atlantis performed a special show featuring a real orchestra. What were the expectations and which memories do you share the most about that day?

Clémentine: It was surreal. Two years ago the band was going nowhere, playing a couple of shows a year and we were in the middle of a period full of doubts about what our future could look like. And suddenly this whole crazy project of playing with a real orchestra comes to life! I guess we weren’t mentally prepared for it. Every one of us was so nervous! But it was an amazing show, so intense, so full of energy and adrenaline. It was also the first time that we were playing with pyros and it surprised me so much I lost my words on the first verse of the song “New Dawn”! But what I will remember the most is the smiles of the people in the orchestra and the energy from the crowd. I guess this show will leave a very long-lasting trace in our memory.

Michele: As a symphonic-metalhead, I think this is one of the goals in the “lifetime to-do list”. Playing symphonic metal with a REAL symphonic orchestra on stage. Just…WOW! I am SO happy we had this chance and I sincerely hope it will happen again as having real instruments just gives a completely different soul to our music. It was so real, pure and alive…even the rehearsals gave us shivers…

The official press release provided by Napalm Records states that “The listener will be taken on a journey into the breathtaking depths of the symphonic metal universe”. Do you both agree with this statement and how would you like to explain it with your own words?

Clémentine: Visions of Atlantis is a 19-year-old band and one of the pioneers of symphonic metal. Since the release of “The Deep & The Dark”, we wish to honor this genre, composing epic, melodic, catchy and emotional songs that take you to another universe, that make you travel, escape the brutal reality of the world we live in. But we don’t wish to limit ourselves to the frame and codes of Symphonic metal. We bring in other influences, I use my voice in many different ways, as we believe Symphonic metal can sound in various ways and we want to keep pushing its limits, opening its definition and bringing more colors to it.

Michele: That’s exactly what we are. As I already told you, with “Wanderers” we really explored Symphonic Metal, trying to shape every possible form of it. You’ll find fast songs and really intense ballads, some folkish-like melody as the one of Heroes of the Dawn as much as heavier and more close to power metal stuff…VoA really dived into what Symphonic Metal is and tried to make this album memorable!

What 2019 has in store for you in terms of touring both in the US and in Europe?

Clémentine: There is no plan to tour the US for now, but we will go on a first headline tour at the end of August to promote the album release and we hit the road in the fall in Europe with Freedom Call!

Michele: I really wish we’ll reach the US, South America again and why not, Japan too as we didn’t tour there during the last years. Europe is already greatly planned for the next months and surely the best is yet to come…just follow us on our pages and you’ll surely find out more and more news really soon!

So, Clémentine and Michele, we’re almost at the end and with this please be free to say hi to your fans and our readers.

Clémentine and Michele: Thank you so much for this interview! Well, at first thanks a lot for space you’ve given to us! Of course thanks a lot to all the readers of FEMME METAL WEBZINE! Stay tuned and if you have a chance to meet us on the road…don’t lose it! Music is life and music is LIVE, and we truly believe that our essence gets complete while we’re on stage! See you there!