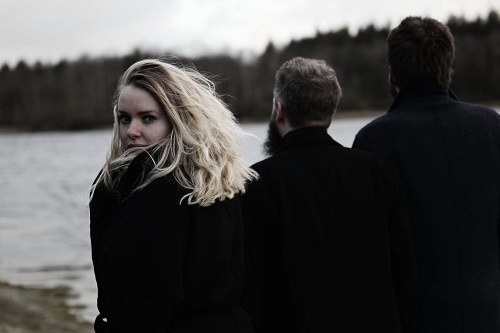 When for the first time I’ve listened to The Netherlands‘s Vuur & Zijde, their debut split with the German depressive black metal Impavida hit me like a tsunami of emotions and memories. In effect, what they triggered my first time when I approached black metal. One of my first black metal albums that I ever listened was Dismal Euphony‘s “Soria Moria Slott”. Deep down both albums remind me of my first time that I landed in the Netherlands and my fifteen days in Friesland. Let’s discover together this upcoming band. Enjoy!

Hello F., welcome to Femme Metal Webzine, how are you and these precarious days are treating you?

Ha! Good question. Actually this is my first day out of a totally unexpected quarantine, as I was tested positive for COVID-19. I noticed my sense of smell was gone and got myself tested, just in case.

I run my own business (a lingerie store, which I opened in the midst of the crisis back in April) and didn’t want to take any risks when it comes to my dear customers. It luckily turned out to stay the only symptom, my nose works again (thank the stars for that!) and I’m reunited with my family.

For the readers that are not still familiar with Vuur and Zijde, would like to introduce how the band came about?

N. and I have made music before, and I approached him last year with the question if he was interested in cooperating again. He told me about some material he still had laying around, originally written for Reiziger, and we made it work. N. & R. have been close friends for quite some time and he felt like the right drummer to complete our trio.

Back in May, Vuur and Zijde released their introductory split release together with German Atmospheric/Depressive Black Metal Impavida via Lupus Lounge, what can you share about its general production and how this collaboration was born?

Actually the idea of a split was there even before R. and I joined, as it was supposed to be a split between Impavida and Reiziger. I believe the Impavida’s reached out to N. about this, but I am not sure. For the split we went for a more old-school approach. The strength of lo-fi productions is that they let us hear things that are not really there – and simultaneously hide elements that are actually being played.

They provide a blurring of sounds that is difficult to pick apart – thus easier to succumb to as a listener. Of course, this isn’t exclusive solely to lo-fi productions nor is every lo-fi production easy to succumb to but when done right it can be a very effective approach. With Peter Johan Nyland focusing on the mix and Dennis Blomberg doing the master, we were sure that the material would be in the right hands due to both’s affection for a more organic sound.

Currently, the split features three Vuur and Zijde songs which are “Zonnestorm”, “Zilt” and “Noordzee” (Dutch translation is: “Sunstorm”, “Salty” and “North Sea”). What led you to write entirely your lyrics in Dutch?

A bit cliché, but to me it is easier to express myself in (one of my) mother tongue(s). When it comes to writing about stuff that matters, words from the heart, translating it to English doesn’t feel right. Imagine the language you would use while bumping your little toe into the door frame, talking to baby animals or when you are about to reach an orgasm. A tip of the veil: on our full length you can expect Frysk as well, which is my native language and goes even deeper than Dutch.

Both N. and S. are part of the legendary Experimental/Atmospheric Post-Black Metal band Laster and the black metal band Nusquama while R. plays in Terzij De Horde. How all these different musical backgrounds influence Vuur and Zijde?

N. writes most of the material and we get to play with it for a while, before it takes shape. Boring part of the answer: I don’t think the guys playing in other bands has a huge musical influence on what we do. Of course the fact that S. and N. have been working together for years helps in the process of creating; they know where they stand with each other. From R. I know Vuur & Zijde is another canvas to cover, an opportunity to express himself in a different way and I believe this applies to the rest as well.

In the press release, you mentioned that these 3 exclusive songs were recorded in “a remote yurt on the Frisian shoreside”. Being a buitenlandse that lives here in the Netherlands almost 4 years, I know how bucolic and isolated Friesland might look especially in January. Do you think that even the natural environment played an important part in the sound of the band?

The yurt actually is my second home, my getaway in the middle of nowhere. This is where I write my lyrics, chop wood, play with fire, stare into the void, hang out with the ones close to me and clear my mind. One can definitely feel the emptiness and windy vastness of the area in the three songs we recorded there. Please feel welcome and stop by when you are in the area, Miriam!

Most of all, I am also curious about the cover album. It depicts this woman who apparently holds a sparkle of fire. Which is the meeting point between you and Impavida and in which way it might represent both bands?

This was designed by the talented Hagiophobic Illustrations after listening to our music and appealed to both bands the moment we laid eyes on it. In my opinion he found the perfect balance between despair and esoteric femininity, in this peculiar mixed photo collage. It suits the music better than what we could’ve wished for.

Presently, you are busy with the production of your debut. How is it going so far and how this pandemic has impacted on the band’s schedule?

Oof, the pandemic has definitely slowed things down a bit as we don’t live in the same city and all had to deal with reorganizing private matters as well. We decided to write and create together with a physical distance and things are coming along nicely. Maybe not in the tempo we had foreseen when we started, but I guess that applies to the whole world at the moment.

So, F., we’re almost at the end and with this please be free to say hi to your fans and your readers. Thank you so much for this interview.

Thank you so much for this interview! I’m way too humble and new to this scene to actually believe there are people who call themselves my fan already, but I love you for taking the time to read this. Also: please support your favorite bands by buying their music in these difficult times. Cheers!