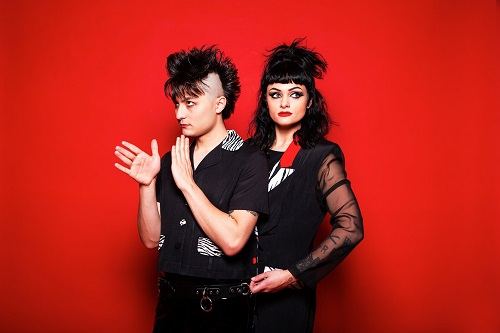 Strong of their incredible aesthetics, Chicago based goth duo WINGTIPS has recently released their debut album “Exposure Therapy” via the leading label Artoffact Records. I’m sure if you’re into The Cure -era “Disintegration”, you’ll definitely enjoy what Vincent and Hannah propose you.

Hi Hannah and Vincent, welcome to Femme Metal Webzine, how are you and how life is treating you with this upcoming debut album?

Vincent: We’re both pretty great and day by day, we’re prepping for our 2-month long American tour and besides the new album coming, these preparations are taking a lot of time out of our schedules and keeping us busy.

First of all, for the readers that aren’t familiar yet with WINGTIPS, would you mind introducing us how you and Hannah got together and subsequently, form this duo?

Vincent: So, Hannah and I met in college when I first moved to Chicago in 2013, we stayed in touch for the first two years, we became friends and then we started WINGTIPS. However, I started earlier with WINGTIPS as a solo project before we met but I wanted to expand it into a full band because I had new ideas for different sounds. In the end, I brought in Hannah due to the fact of her sincere interest in the project and basically, that’s it.

Nice! So, Hannah what you can tell me about your musical formation and your influences?

Hannah: Well, we both have a lot of deep roots in the performing arts and we both studied musical theater in college.

Vincent: The interesting element is that we both come from such a charismatic background and this influences us a lot. We started to listen to the same post-punk music artists and we got influenced by a bunch of a lot of stuff.

As I told you before, I really enjoyed your debut album and on the 23rd August was released your full-length “Exposure Therapy”. What you can share about its general production and when did you start to compose for this album?

Vincent: So, we both started to write songs here and there about 2 – 3 years ago, just in pieces and begin with the general idea formation because at the time we just come up with an LP that had a similar vibe from what we did transition to but something completely different. There’s a lot of emotional intent and a serious attempt for an advance towards discovering our musical roots itself in the album. That really helped provide a lot of atmospheres that we were able to create for this however we started composing it, like I previously said, about 2 – 3 years ago and then we walked into the studio about 2 years – 1 year and a half ago and while doing that, we did already set in motion everything for the release including finalizing the last details for the artwork.

So, the other thing I would like to add is that “Exposure Therapy” has been released via the renowned Canadian label Artoffact Records. How was the first approach with them and how did you get in contact with them?

Vincent: Well, you know, it’s funny because I sent them an email one day for showing our appreciation for Vancouver‘s post-punk and new wave band ACTORS. In the meantime, I saw that the label has recently begun collaborating with Iceland‘s Kælan Mikla of which we are fans as well. Since our album was finished, we have been looking for a label and I thought that Artoffact Records was our perfect fit consequently I shot them an email. Usually, the process works like this: shopping your album around the labels react and once again, you send them an email of which outcome is quite uncertain and unsure, that surely, it has a tendency to have a low feedback grade. In our case, however, the label replied really quickly and they expressed positive interested towards our material and after that, we were able to get the ball rolling pretty fast and they really laid out for us an intriguing and exciting plan which of course, we were really looking forward to. In the end, we’re really happy to work with them on our first release.

You mentioned earlier that you and Hannah know each other since college times and in college, you studied music and arts. How these past experiences and knowledge influenced the overall WINGTIPS‘s musical picture?

Hannah: Well, I think it has a lot of influence on all the aspects of WINGTIPS as a whole. Both in recording music and live performances itself of which we like to program and create completely by ourselves. Also, I feel like we have acquired skills that we have learned from our last performing arts experience in effect what we are doing is, bringing those elements and enhancing them according to our music.

Vincent: I feel like there is a lot of theatrical music training that we would like to bring in. We’re not being actors per se but definitely have the skills for the performing arts. Our live shows are  definitely theatrical and we are knowledgeable of how to create atmosphere and manifest openly our ideas, so the audience can see and hear them.

I can openly perceive this from your promo shots because every detail has been accurately looked up for. For example, there is this particular shade of red which showed me that even the promo shots were highly planned and well-concocted. In conclusion, I can already get it from there.

Vincent: So, right, we wanted to really team up with people that had a very refined skill in capturing visual arts with a special inclination to aesthetics. Therefore, for our album photoshoot, we worked with another two artists akin to our style from the Chicago scene and they help us concoct our looks. Then, we put against a color texture who our photographer Alexa McQueen was able to achieve to create. For us, we really like to work with people on the same artistic wavelength, we mix both elements from the theatrical and visual aspects and it’s just as important to our project as the sound and the music.

Well, as an introductory and opener song you have chosen the outstanding single “Death Pursuit”. What insights you can share about it

Vincent: I think it’s definitely our heaviest tune to date. Not strictly in terms of the music but it’s related to what I sing in the lyrics. I started writing some little pieces of the song during a particular period while we were going through a lot of emotional changes in our lives and we surround ourselves with unhealthy people. Hannah and I were going through emotional turbulence as a team, so a lot of the intensity in the lyrics mirror these experiences that we had and this one aspect of the fact. Also, the music starts to fall in line because when you are writing music at a particular time like that, things tend to reflect on it. As I said before, I started to write some little pieces of it and then, Hannah and I would collaborate and build on it. We both had the same idea and all it came together, in the end, it was just one idea. It’s very reflective of what we were experiencing at the time. Actually, it was the first song that we have completed and we begin to play it like two years ago, so it’s a really long time.

Considering that it’s just your debut album, however, I can perceive some echoes of legendary 80s acts such as OMD and Talking Heads. Can my interpretation be correct?

Vincent: I think a lot of people will agree with you but it’s actually funny the fact me and Hannah we haven’t ever listened to that kind of music. Probably, the reason why we get matched with those band it’s due to the fact that we use the drum machine and synthesizer. You know, we come from a musical background that heavily reliables on melody and of course, the pop aspect comes into place then consequently you have this synth-pop music. Other than that, I think with the similarities with the 80s stops there. We both listen to a lot of different and weird stuff and recently, I’ve discovered a lot Eastern music and those kinds of melodies are stuck with me now.

Before concluding our interview, I wanted to ask you which are your future plans in terms of touring and releases?

Vincent: We have a tour scheduled for the next 2 months in both North America and Canada. Beyond that we don’t have any other solid plan, we would like to come to Europe and we are definitely putting our horizons on that goal but, you know, things are always up in the air. Well, in terms of the next release, we are always writing music and at the moment, we’re working on a number of different sounds and demos that we’re attempting to understand if they are a perfect fit for the next release. Only time will tell.

This was my last question, Hannah and Vincent. I really thank you for your time and now it’s your space to say hi to your fans and our readers. Be free to say whatever you want.

Hannah: Thank you so much!