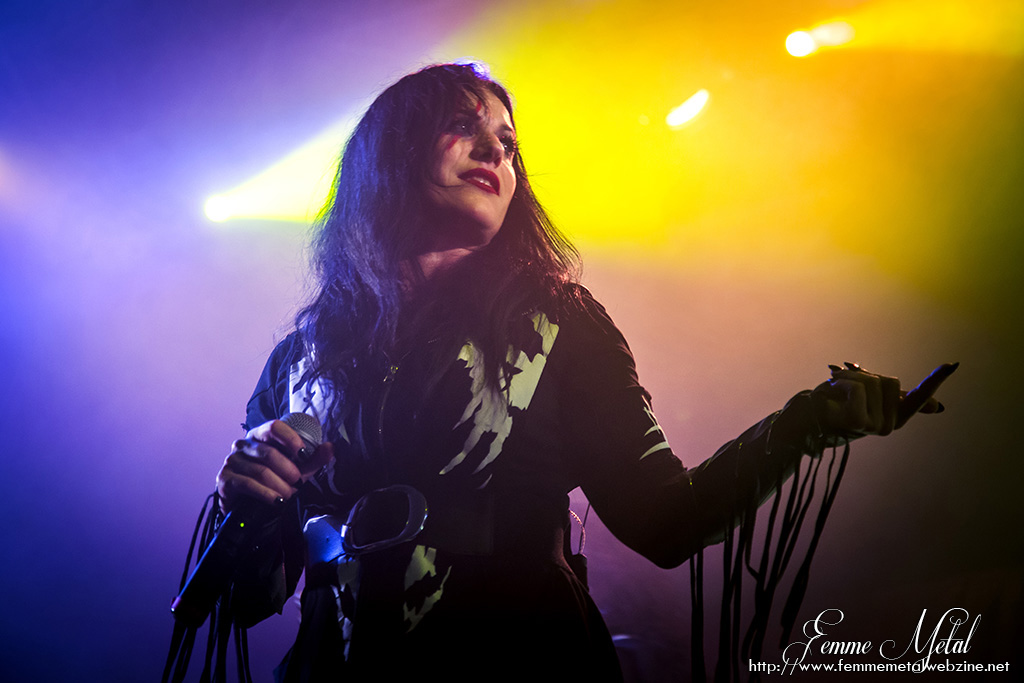 A few weeks after the release of the latest studio album, the “Black Anima Tour” by Lacuna Coil has stepped in Bologna as well on the evening of November 5th. A show that reached out a full soldout at the Estragon Club a couple of hours before the actual beginning of the show itself.

Special thanks to: All Noir (Mona Miluski), Estragon Club

The first band to open this set is Infected Rain, still fresh of the brand new release, “Endorphin“. Indeed this is one of those bands of the new wave of modern metal that the audience has talked about a lot with no comprimes. This talented band is led by the gutsy frontman Elena “Lena Scissorhands” Cataraga, who managed to approach her own audience since the very beginning thanks also to the knowledge of the Italian language and who has also shown off a great friendliness and a super power that she always kept on stage. Once again, Lena has proven of owing a fantastic and versatile vocal line. Impressive skill and compactness also in the rhytmic section formed by Eugen Voluta and Vladimir Babich, and by the two axemen Sergey Babich and Vadim “Vidick” Ozhog who complete the dynamic who between cutting solos and electronic hooks.

After the great performance of the Moldavian band, it’s the turn of the numerous Swiss folk metal act Eluveitie to own the stage. Also this band has two new releases behind its back, the latest studio album ‘Ategnatos’, released this Spring and the first live album, “Live at Masters Of Rock”, published a few days prior this new show in Bologna. One thing that arouses a lot of curiosity during the shows of this Swiss band is the attendance of so many instruments of the Celtic and popular tradition; in addition to that, it bewitches also the fact that a lot of poli-instrumentalists are present on stage. As usual, the band has transpired a great sinergy between all the band members and it has transmitted a unique feeling to the crowd, also thanks to the performance of some old song that never lose their emotive feature, like for example “Inis Mona”, that has started a small, but very relevant mosh in the first rows. Amongst the amazing setlist, we also find “The Call Of The Mountain”, entirely sung in Italian in the version called “Il Richiamo Dei Monti”, by the talented Fabienne Erni, who also performed after a small interlude, very intense and thrilling.

Headliner of this wonderful evening is the Italian master Lacuna Coil who enters the stage after almost a couple of minutes of wait. For this new tour, the band opted for some brand new and original costume, that still keep the trace that the Italian combo has drawn in the past few years. After a sinister intro, the band from Milan kicks off this new live show with “Blood, Tears And Dust”. Immediately the crowd seems to be very involved and it follows the performance with emotion and a great energy. In this 90 minutes set, the band alternates some song taken off the latest studio album, like “Reckless” and “Layers Of Time”, but it gives also a look at the past with songs like “Our Truth” and “Heaven’s A Lie”, until the moment where it comes “Enjoy The Silence”, which became a classic in every Lacuna Coil’s show. It’s always good to underline that element of connection that the Italian band has with the audience, that makes every gig something more than a simple show; the way that both Cristina Scabbia and Andrea Ferro manage to involve the whole crowd through some little anedocte or small thoughts between a song and another is something unique. The band has always been supported by an audience that never got rid of singing and dancing in every song and who didn’t want the band to leave the stage of the Estragon Club after an hour and a half of concert.