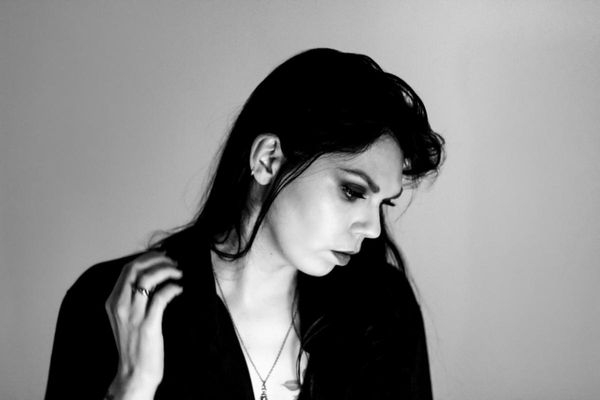 Due For Release October 7 on Bella Union / [PIAS]

“Traditionally, your second album is the worry; where there’s the weight of expectation,” A.A. Williams contends. “But I must create music I like myself, and I’ve had more time on this record; I’ve felt more confidence and conviction. ‘As The Moon Rests’ is both heavier and softer, there’s more texture and weight, and a string ensemble. It’s Forever Blue times ten!”

Released in July 2020, Forever Blue was the London-based singer-songwriter’s album debut, a brilliantly dramatic, unique and intimate walk on the dark side that fused bold and smouldering hues of post-rock and post-classical. By turns, it was glacial and volcanic, blissful and violent, through moments of disarming quiet and explosive volume, equally appealing to alt-rock and metal camps.

“The shifts between moments of high drama and quiet tension point to her kinship with Chelsea Wolfe and PJ Harvey,” stated Uncut. “Stirring and evocative… The chances of a more heartrending and fully formed debut emerging this year are practically zero,” reckoned Metal Hammer.

As Williams contends, As The Moon Rests amplifies the scale of her ambitions, crystalised by “Evaporate,” the first track released from the sessions. It comes with a video that embodies the thrilling tensions of Williams’ world, where emotions walk a fine line between control and chaos.

Likewise, the impact of William’s deep-trawling voice and lyrics that ask all the right existential questions throughout As The Moon Rests: who am I? What can I change? What can’t I change?

As The Moon Rests Artwork & Tracklist:

Forever Blue had already set in motion Williams’ quest for self-improvement, but the pandemic presented more challenges. As Forever Blue was about to be released, she started posting solo videos – cover versions suggested by her fans, such as Radiohead’s ‘Creep’, Nick Cave’s ‘Into Your Arms’ and Deftones’ ‘Be Quiet and Drive’, alchemised to fit her own crepuscular sound and vision.

Songs From Isolation, as she called it, “was a positive experience to focus on through the overwhelming reports of bad news. And I could have a dialogue with my listeners.”

Songs From Isolation subsequently turned into a nine-track album of covers, a definite and heart-aching document of solitude and fortitude. Next came arco, a re-imagining of Williams’ debut (self-titled) EP for just voice and strings.

She’d played the string parts (as well as guitar and piano) on Forever Blue, but here she wrote the arrangements for a ten-piece ensemble, transposing the rhythm and low end of a rock band into sumptuous and elegant orchestrations.

The string ensemble returns for As The Moon Rests, bolstering the album’s cinematic dimensions and underlining the palpable drama of Williams’ quest to forge a more liberating path. The album’s opening track “Hollow Heart” sets out the emotional terrain: “Give me time and I will learn / that I am only human,” she sings before the instruments begin their slow climb to boiling point.

“We had better equipment, and more experience at hand,” says Williams. When they were finished, As The Moon Rests clocked in at a mighty 62 minutes. “I was expecting to take a few recordings away after we’d finished, but the consensus was that everything was good, and worked as a collection.”

The album takes its title from the closing track. “For me, ‘As The Moon Rests’ jumped out as evoking a change in direction in the lyrics,” she explains. “It’s a love song, not necessarily romantic, but between two people with an unwavering bond. It seemed poignant and prominent enough to work as the title.”

That unwavering bond could equally exist between two conflicting parts of the self. “Most of Forever Blue’s text was quite insular,” she recalls. “I was trying to understand myself, trying to cure, or eradicate, parts of myself. But I realised that if you remove things; you might remove parts of your personality too. You just need to learn how to manage things, to be kinder to yourself. It’s all a journey, a progression.”

Williams would rather not specify any incidents, triggers or memories behind each individual song. “It’s all part of an overriding arc,” she says.

“With hindsight, some songs I figure things out, others I disappear into a hole. For example, in ‘Evaporate’, I’m trying to keep a lid on fizzy complicated thoughts, which just explode. Other times, I’m more relaxed. Mostly, writing is more retrospective, not about the here and now. The lyrics are the place where I figure things out.”

Now Williams and her live band – Thomas Williams, Wayne Proctor and multi-instrumentalist Matthew de Burgh Daly – get to figure out a proper headline tour in support of an album, since lockdown meant that their first headline show on London’s South Bank in early 2020 became her last for well over a year, until a short headline tour in Autumn 2021 that at least gave them the chance to commune with fans and feel the white heat and spark of performance.

In August of this year, they’re supporting Japanese post-rockers MONO, Williams’ collaborators for the 10” vinyl single ‘Exit in Darkness’; in September, to launch As the Moon Rests, comes their biggest headline show yet at London’s Queen Elizabeth Hall.

Following that, Williams will undertake her first comprehensive headline tour: a 6-week trek across the UK and Europe, taking in 34 shows over 12 countries.

Williams’ journey may have been held up by events, but in all other aspects, everything that culminates in As The Moon Rests is incontrovertible proof that it continues to build and thrive.

A. A. Williams As The Moon Rests headline shows: