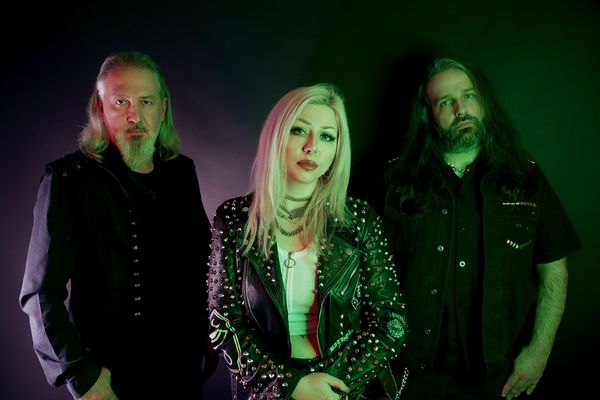 Absinthe made a name for herself playing the bass for different international acts of the metal scene through the years, such as the German band Enemy of the Sun, and Greek dark metal act RandomWalk, among others.

The completion of the songs for the debut album coincided with the artist’s move back to Greece in the end of 2019, where Absinthe was joined by former RandomWalk bandmate Harry Mason on drums and later on by Villy Pirris on bass, forming Absinthe Green as a full band with herself on vocals and rhythm guitar.

The band’s first single is the song “Dead Before My Eyes“, which will be released on March 18th on all digital platforms, accompanied by the band’s first official video-clip of the song.

Dead Before My Eyes a high-powered enthralling rock anthem, coming from the kick-off full album, “Of Love and Pain”.

“Of Love and Pain”, is an amalgamation of Absinthe’s musical influences and personal life experiences.

Produced by renowned producer Hiili Hilesmaa (HIM, The 69 Eyes, Amorphis, Moonspell, Sentenced et al.), it combines pop elements with aggressive guitars, solid, groovy drum beats and a variety of vocals that have the ability to pull diverse audiences together.

The album, coming out later this year, consists of 11 tracks that venture into life’s duality and inner struggles with love and pain, loss and recovery, destruction and creation, light and darkness.